We are trying to get our black cat, Shadow, more friendly.
Shadow was a very wild and feral cat that chose us after surviving a very cold winter outside.  We opened the front door one day and she ran inside, and has not wanted to go back out again since that cold winter day!
We, of course, caught her and got her all her shots and tests, as needed, before she ever got too close to our Jackie.
At first, after she moved in, Shadow kept her distance from us, although she loved and worshipped Jack from way before she ever came inside.  She fell in love with Jack through the storm door.  She really loves all other animals, I've never known a cat who loves other animals like her.  She's not too picky, she loves squirrels, raccoons, Jerry the outside cat, even guineas.  And especially cats.  She cuddles with Jack and cleans him, and forces him to clean her, too.  He doesn't mind too much, he's pretty easy-going.
At first we could never touch her, she never entered the same room as us nor would stay after we entered.  She thought we might kill her and skin her at any moment.  And she was terrified of the television when she first moved inside, too.  But as the years have passed, she has become quite friendly.  She is truly the most loving cat, and she so wants to please us.  She still isn't too happy when we pick her up and trim her nails, which we try to do every couple weeks.
Shadow is very smart.  She watches Jack all the time.  She learned how to shake hands from Jack, too.  I taught Jackie to shake hands years ago - it only took a couple days and a few cat treats.  Shad learned the trick from watching Jack and Randy shake hands and it only took a couple days before she was shaking.  I'll have to get a video of them both shaking hands with Randy.
In order to make Shadow more friendly, Randy has been encouraging Shadow to jump in his lap when he sits on the floor.  She has developed an addiction to lunch meat, which he started using as a treat.  She really loves any kind of people food, and has gotten sort of rotund.  She used to be so lean when she first moved in. 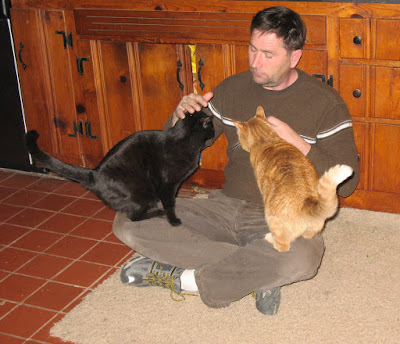 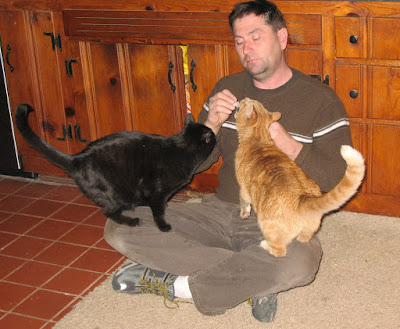 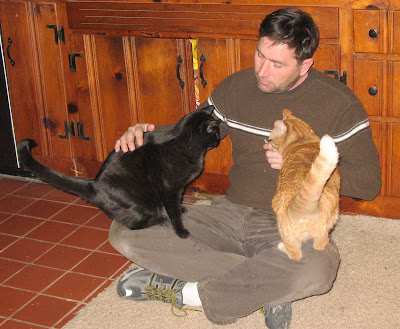 It appears from these photos that Jack is the only one getting a treat, but I can assure you, Shadow wouldn't let that happen.  I guess I only took pictures when Jack was getting a treat.
Have a good weekend!
at 9:19 PM

What a great post. Great pix too. Shadow looks like our Rascal did, though the personality is different. Before Rascal, we had a feral cat we called Junior. The first time he finally came inside my bird clock "struck" noon. The noon bird was a hoot owl and Junior about turned inside out! It got so where we had to bribe him to go back outside. Sadly he disappeared, along with all the other cats in the neighborhood. I'm so glad Shadow's story has a happy ending. Good job.

Leigh - Lol, Shaow would have about turned inside out, too, if an owl started hooting inside the house back when she first came in! I'm sorry Junior disappeared. That's so sad.

I remember the first time I turned on the TV in the kitchen when Shadow was in the kitchen - she ran out of there so fast and hid under the bed. I'm glad she has gotten friendly, and I hope one day I can pick her up and cuddle with her without her secretly thinking I might cut off her tail.

Great photos and a wonderful story!

What nice kitty's and what a nice man. I love those pictures.

Randy and Jack are doing a great job with Shadow. His coat looks great - so shiny!

lynn, i should not be blogging and am supposed to be working but just had to read your post after seeing that adorable photo! i love love this post!!! first i love the fact that your hubby is so patient with kitties, so many men are not. and of course the fact that shadow was in need of a home and you allowed her in make my heart sing! she is so pretty. all of my kitties are strays except cricket whom callie gave birth too. he is the worse behaving kitty in the world and no, not thankful in the least but he has never clawed his 'grammy' but he tackles are beats up every other barn cat! have a wonderful weekend!

Oh I just LOVE these pictures!! LOVE them. Fantastic.

Terry - Shadow IS very shiny, she's a prtty cat, but she's not very photogenic - in pictures her eyes always come out half-closed or glowing, or she has a goofy expression...

KK - All my kitties are always strays that chose us. I don't need to choose cats, they find me, usually they show up when I don't think I want anymore pets. Right now we have another stray black cat that just started showing up outside. She's very wild, and she looks just like a very skinny Shadow. Maybe she's Shadow's little sister. But Jerry chases her away, so maybe she's a young male cat. Who knows what will happen...

Nat - I haven't let Randy know that I put these pics out there for all to see, he'd probably have a cow! :)

Nice to see Randy so sweet and patient with the kitties. Both Shadow and Jack are adorable. I wonder if it registers with Jack seeing Randy pet Shadow that it's an okay thing and soon he'll allow Randy's hand to do the same. In our new place there is a cat that we are coaxing to hang around. We've left food and water for it and at first the cat would only come around when it was dark. Just the other day we noticed and watched it gingerly eat from the bowl, always watching out in its surroundings.

I just love that cat tale. My mom had a cat that just wandered in and made himself at home too. Looks like Shadow knew what she was doing walking into your house.

The best cats are the ones that choose you. Pretty smart to pick up behaviors by watching.