It has been a rainy week here at Razzberry Corner! 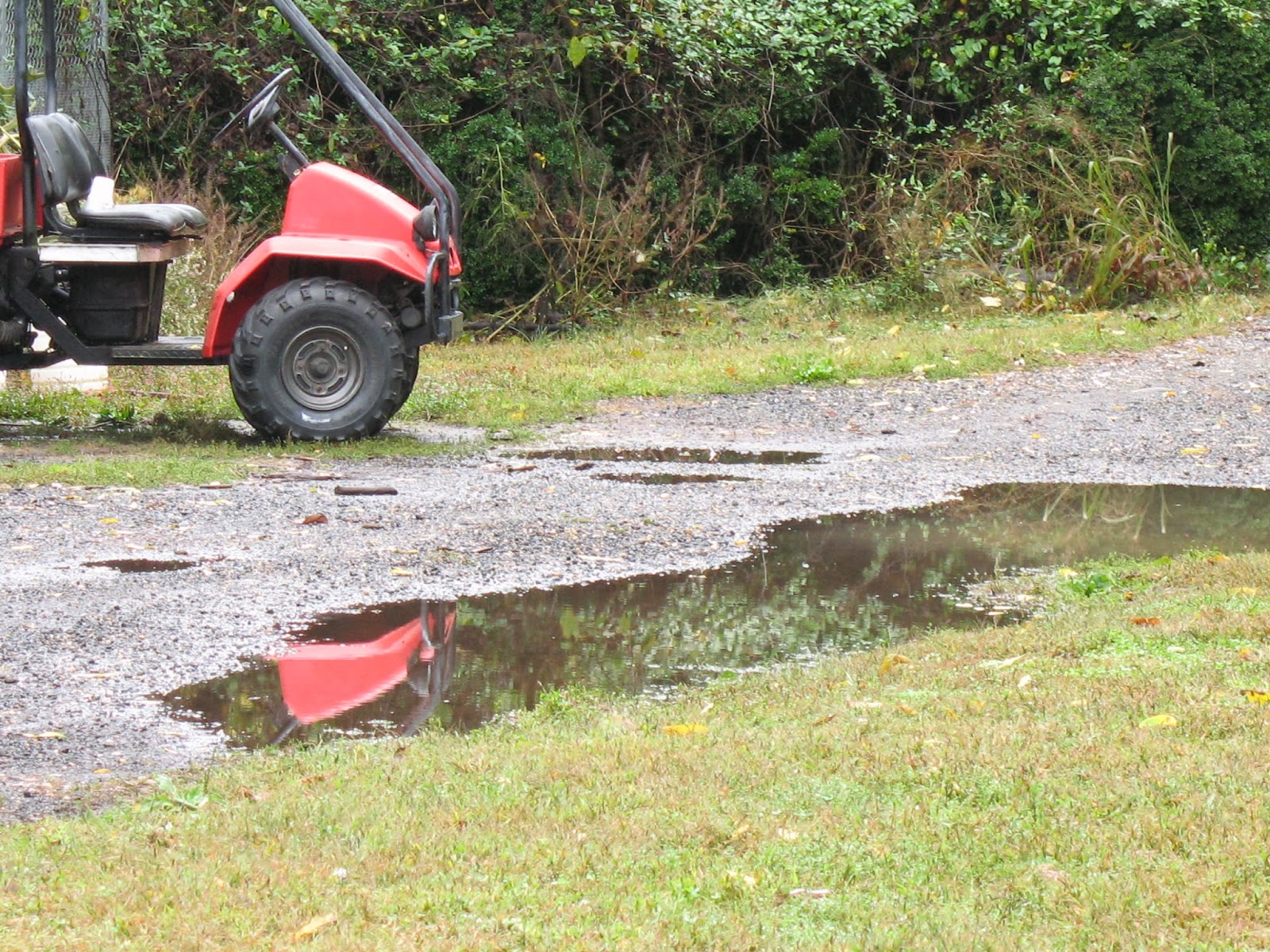 Finally today it stopped raining, but everything is all muddy.

Benjamin and Brindle, the outside cats (they used to be called stray cats, now they are just "outside cats"), are in the process of putting on their winter coats. 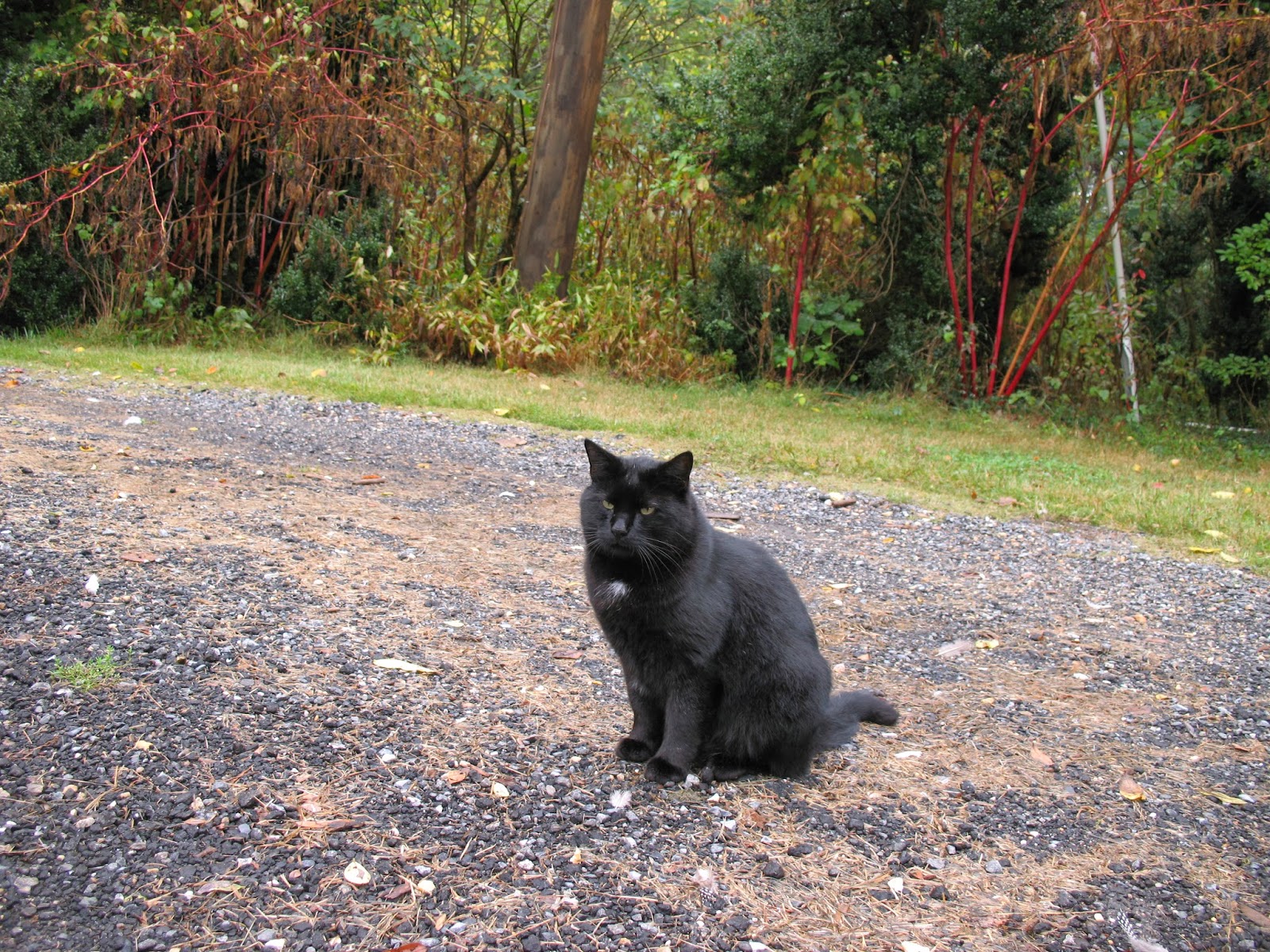 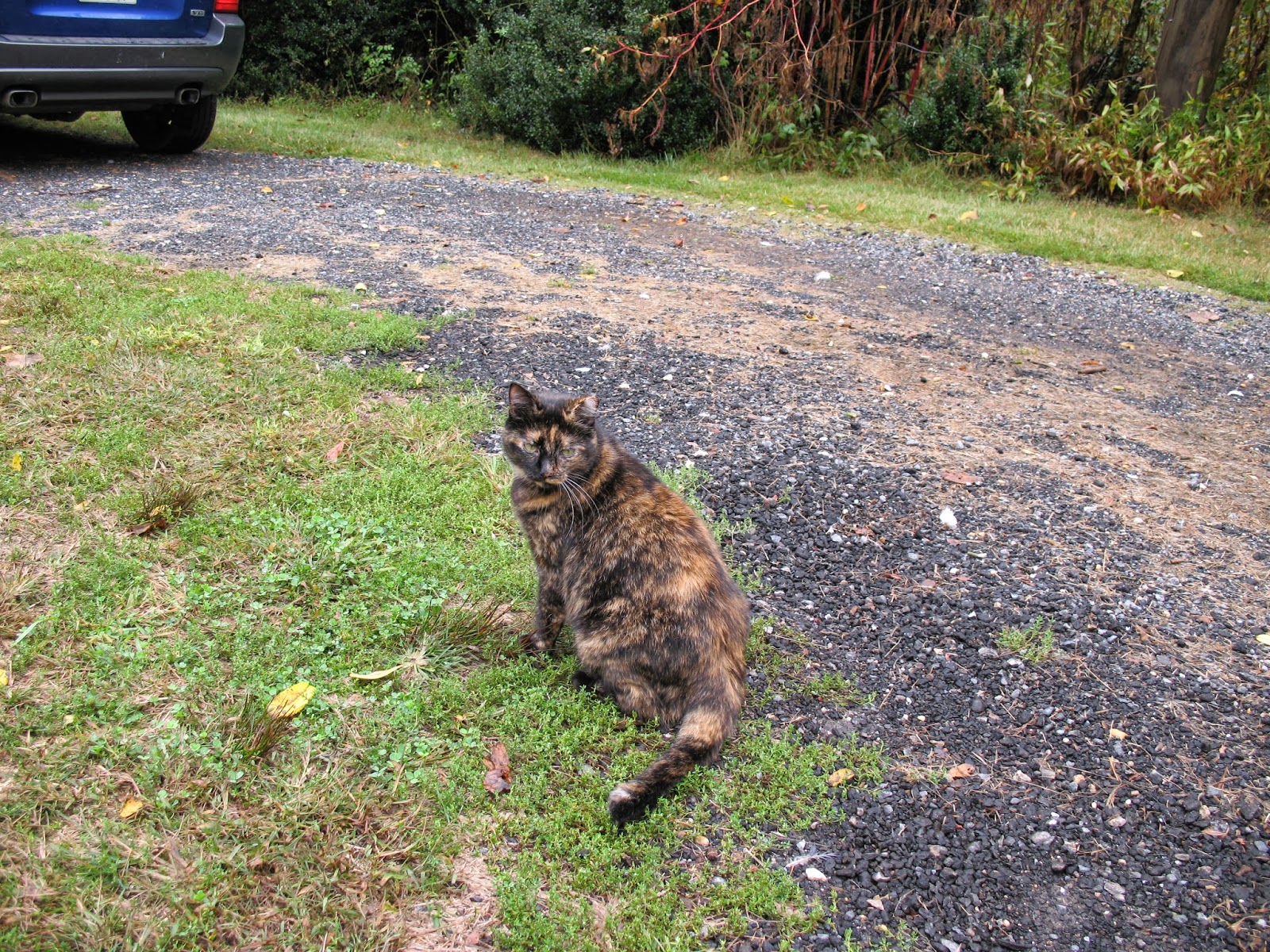 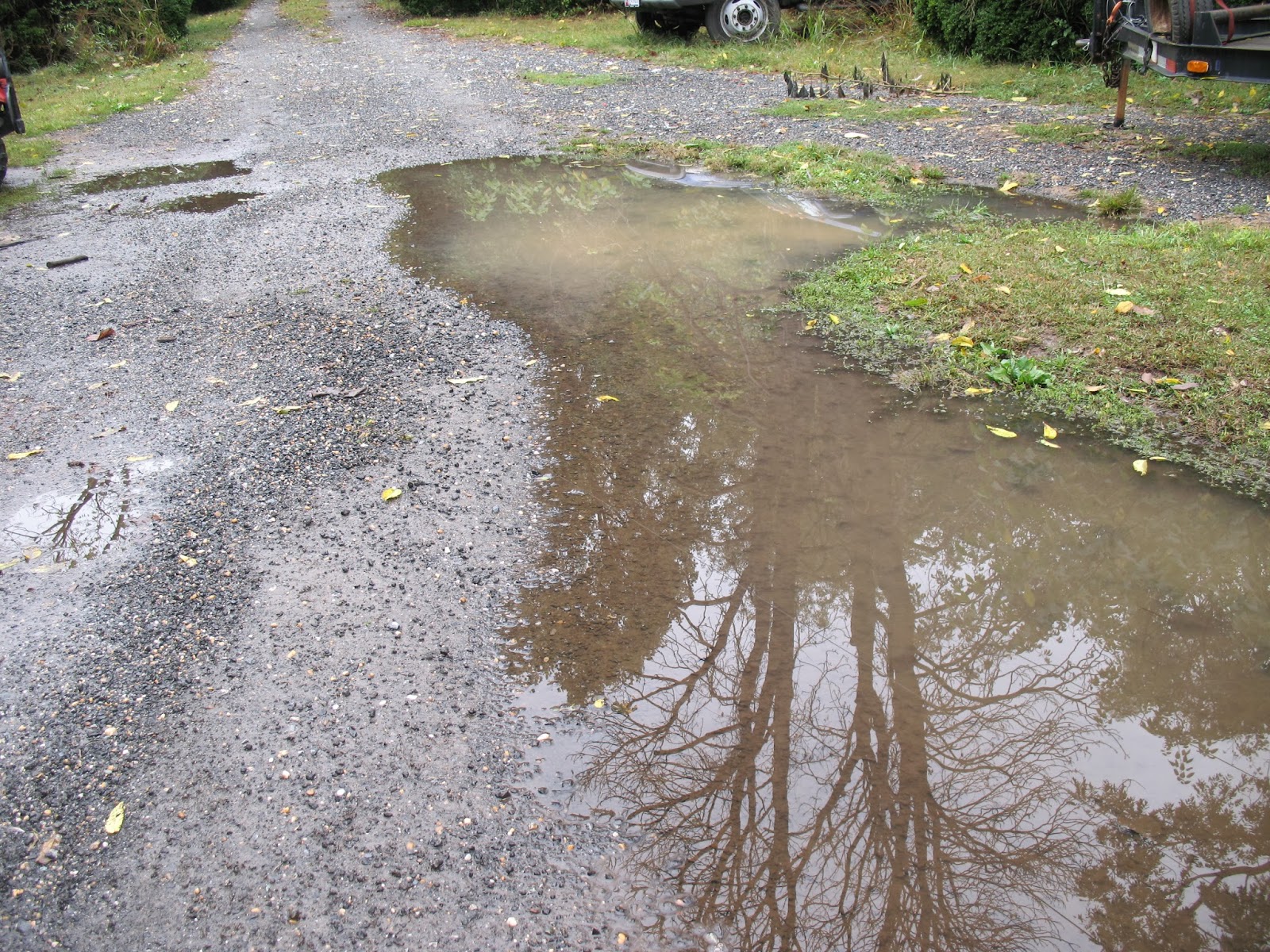 The chicken pens are all muddy.  Poor birds.  I cleaned their coops so they have a clean dry place to go. 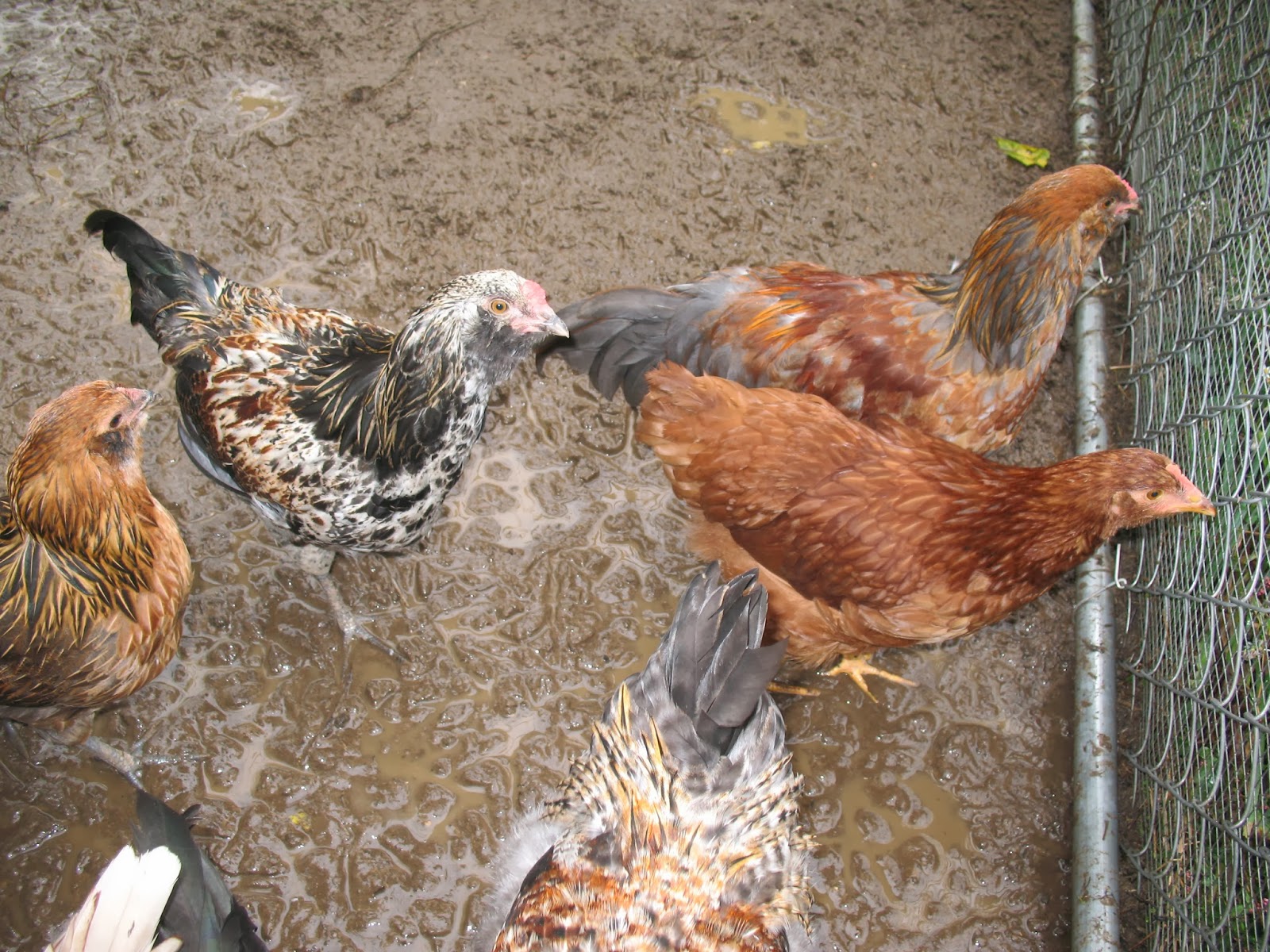 The guineas aren't too happy about all the rain, either. 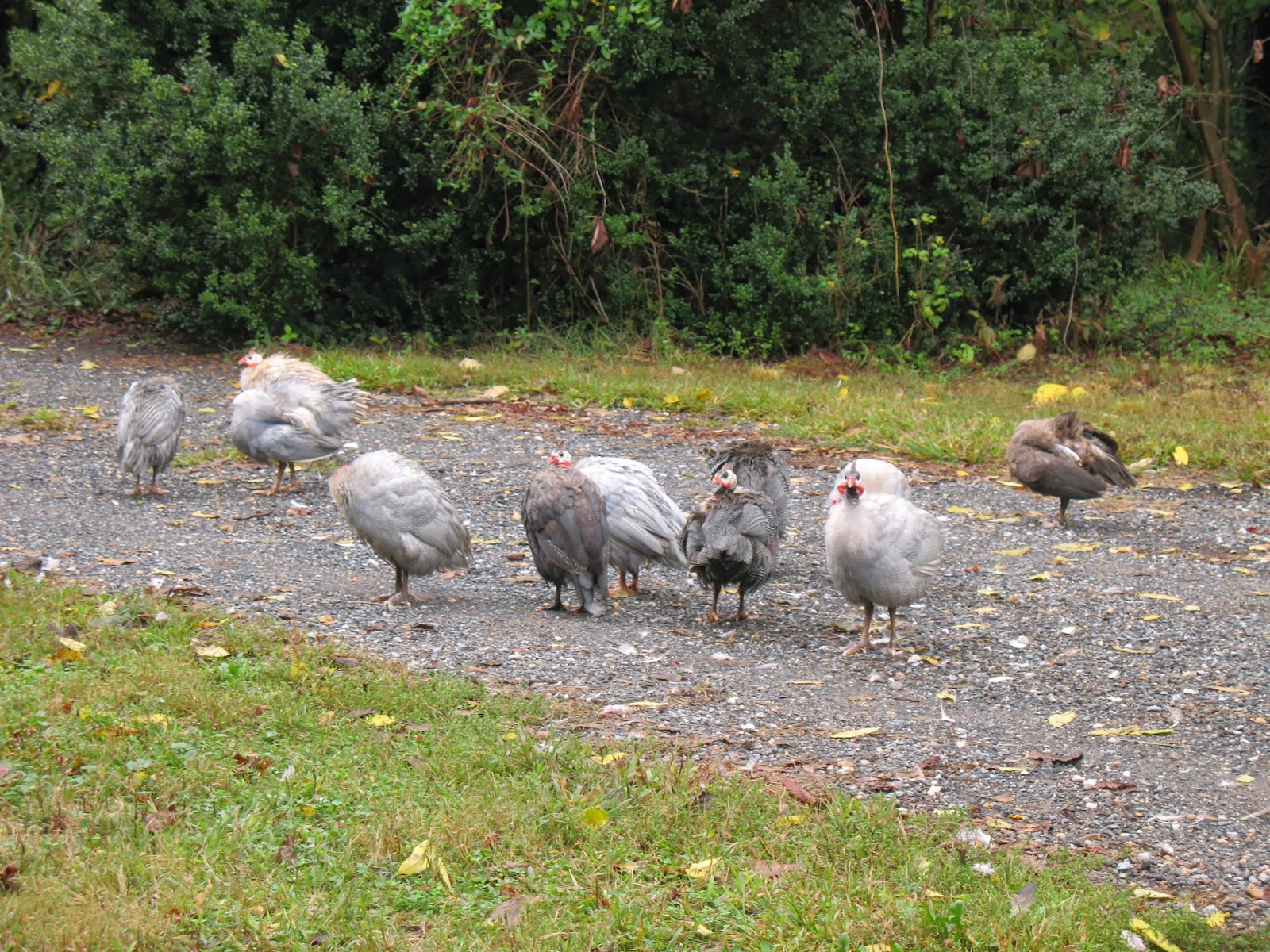 Our flock has grown by leaps and bounds this year.  Its a lively place out there in the chicken pen.  We actually have 2 pens now; the chickens can go thru the second coop to access the second pen.  Yes, there's 2 coops available for everyone, too.  The second coop and pen normally are used as an infirmary area or chick area, but right now there's no one sick and no babies that need to be separate.

In the below pic are:  Front - gold laced wyandotte pullet named Ruffles, behind her is Doritos, a Red Sex Link pullet.  To the left and behind is Little Red, a Rhode Island Red pullet (the Reject chick).  Standing in the crowd with tall necks are 2 brothers - cockerels, sons of Muffin the rooster.  The yellow boy is the son of Pennie, the shelter hen (or the house hen, as she prefers to be known), and the boy on the right is Big Bird, son of Big Bonnie the shelter hen. 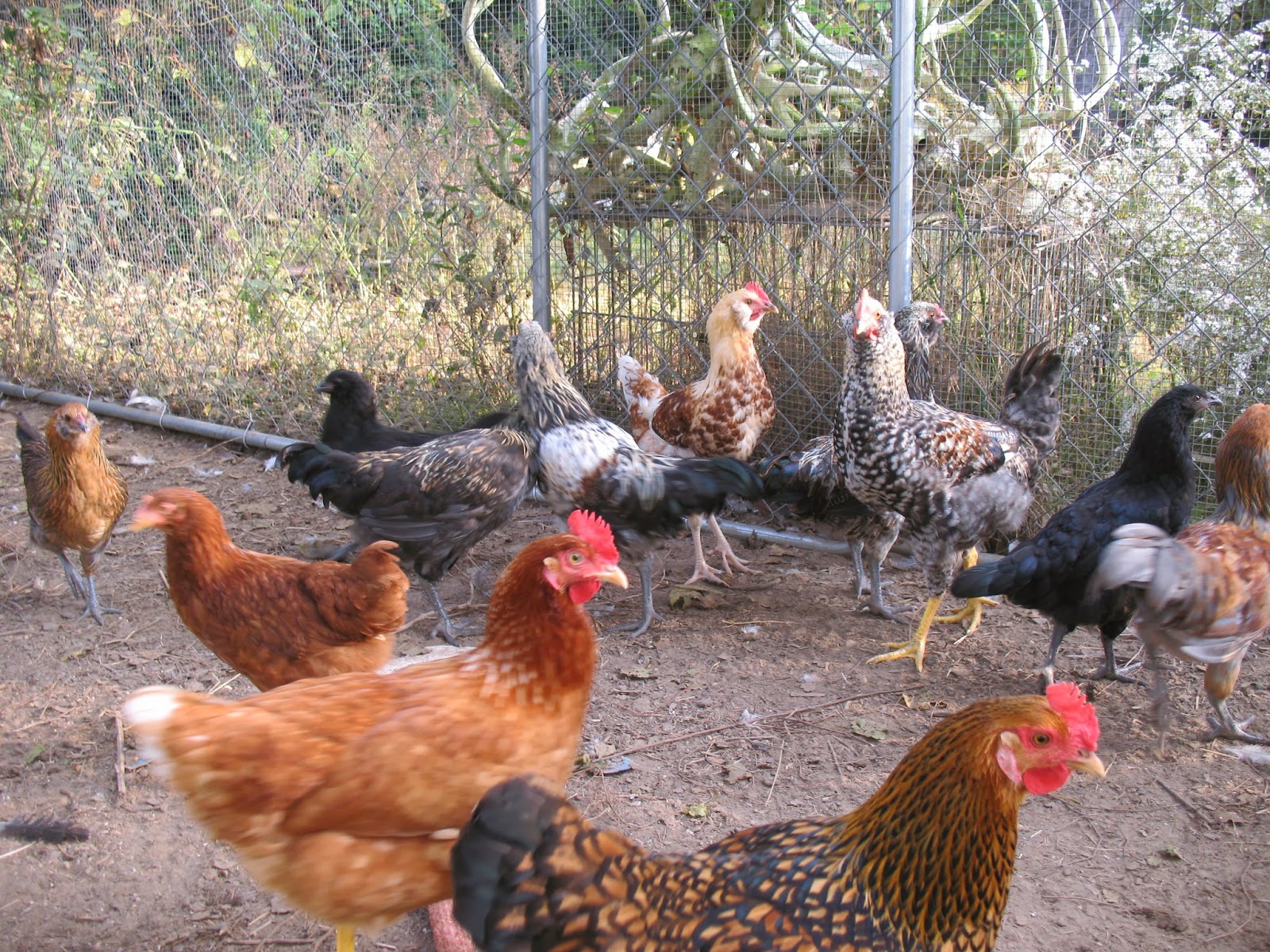 Here's Big Bird below watching my camera.  To his left is another one of the chicks - he's one of the ones I got from the farmer's market.  I think it's a boy so I'm not going to name him.  Sorry, buddy.  Directly in the background is the rooster, Muffin, the baby daddy to 4 of the chicks (Big Bird, the 2 all-black girls, and the yellow son of Pennie). 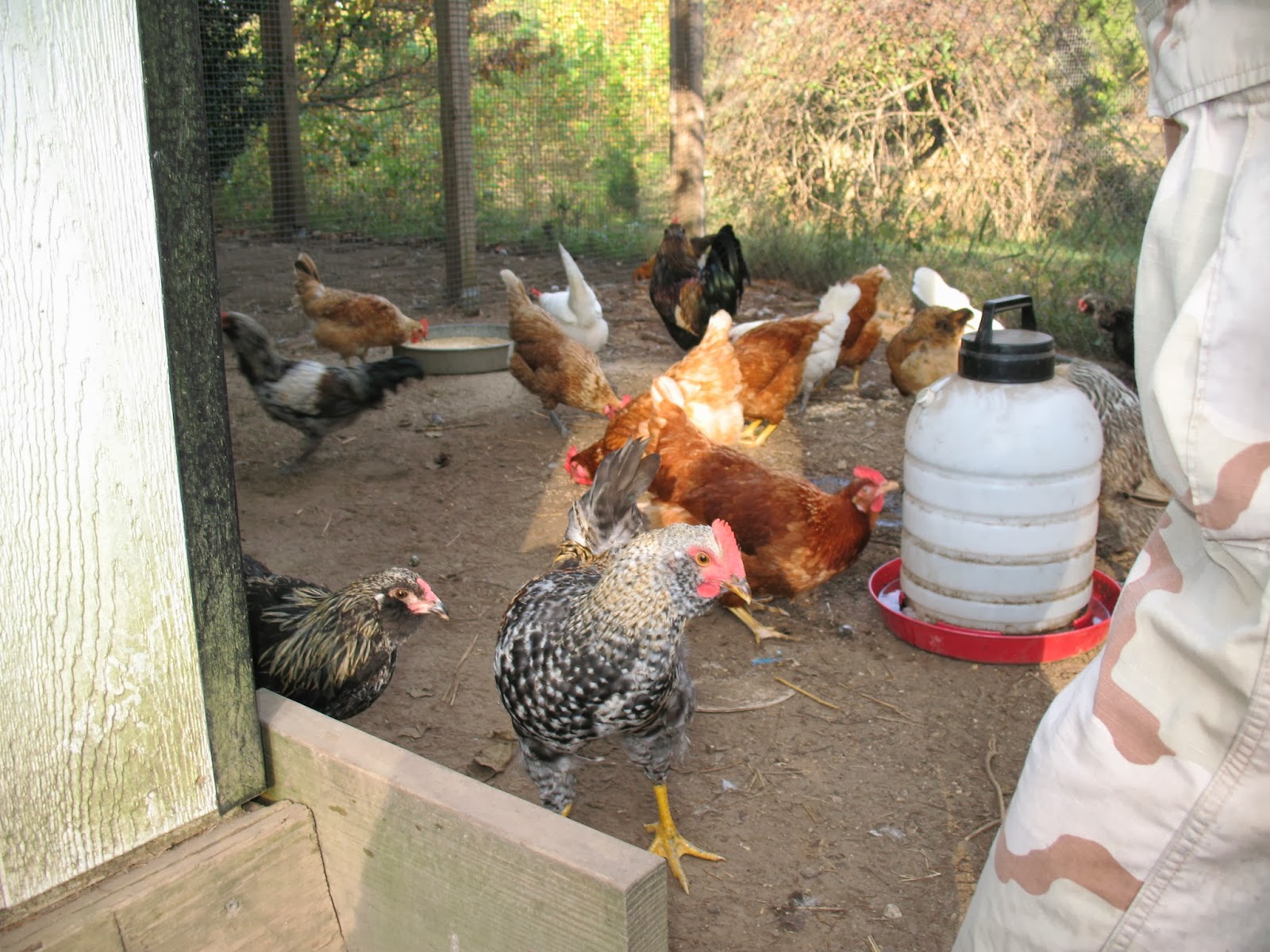 Here's Doritos below.   I'll let you in on a secret.  I have 3 pullets named Doritos, 4 named Pringles, and 2 named Ruffles.  I can't tell the birds apart so they were named based on their breed. 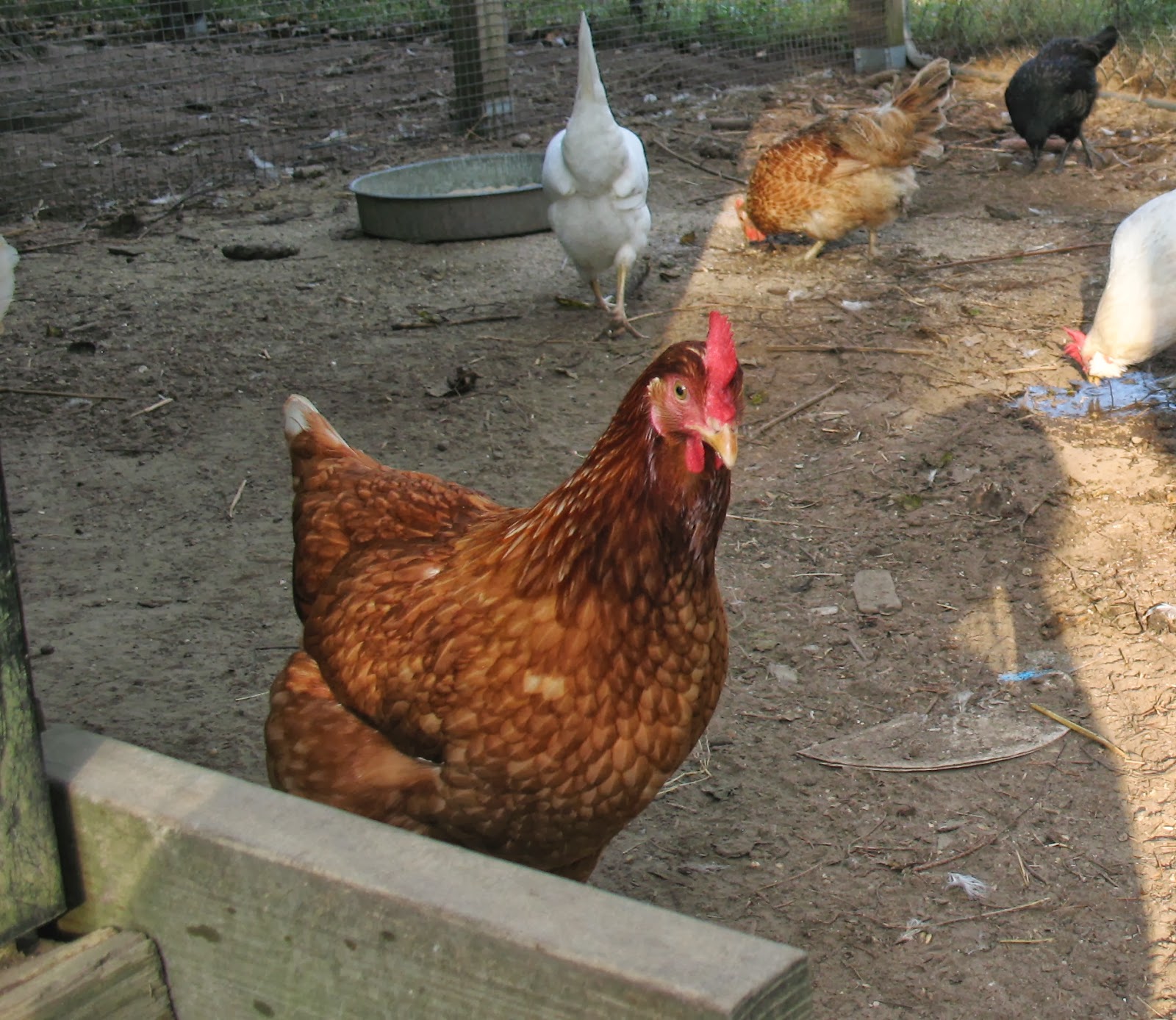 This photo below just shows how big Big Bird is compared to Little Red.   They were walking side by side.  Little Red was a reject as a chick but she fits in very well with the chicks now. 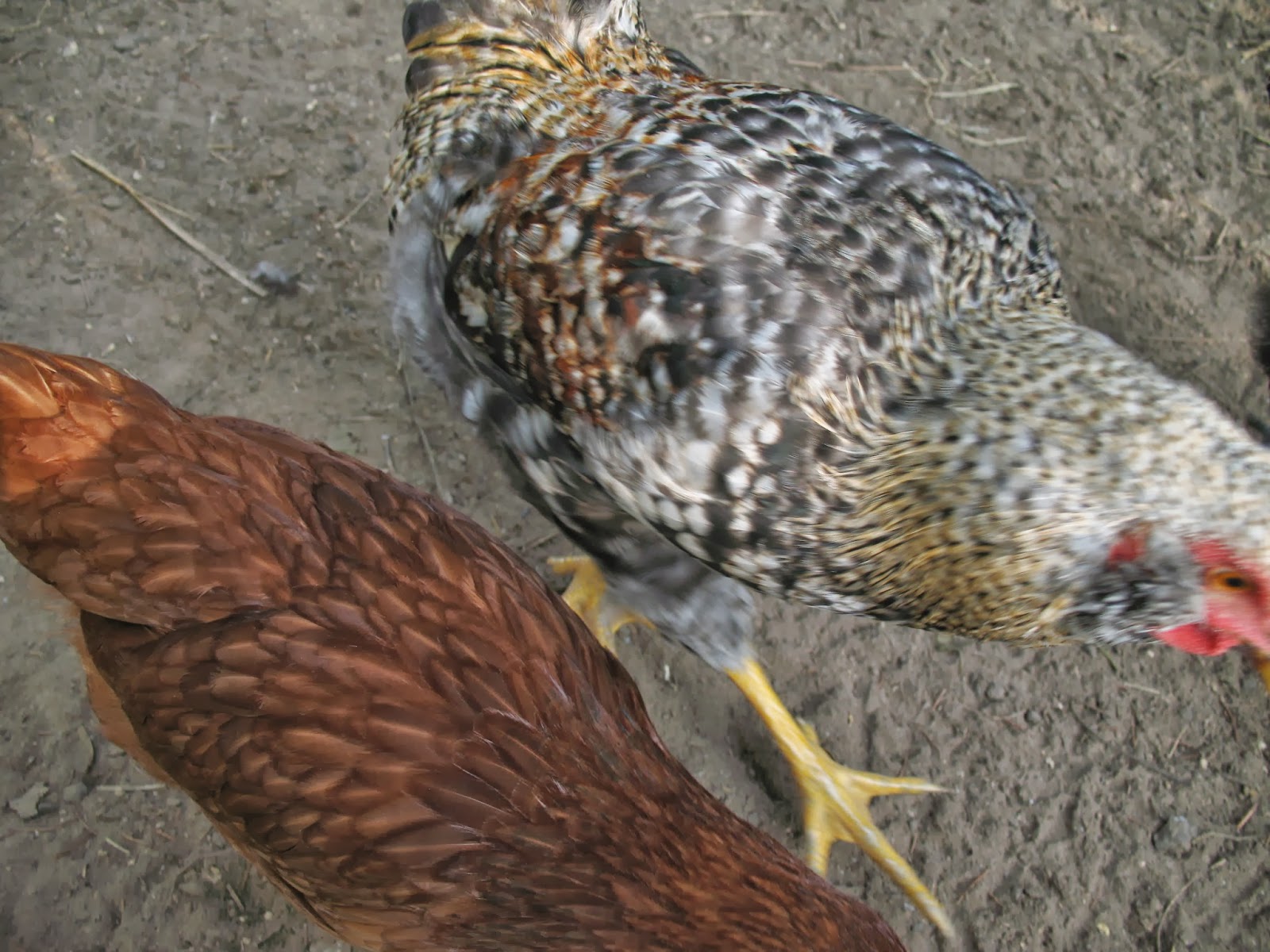 Look below at all the Pringle's tails in the air!  The 3 white leghorns on the right are Pringles.  They are some egg-laying machines.  They are so hyper and scared.  They are our least-friendly birds, always dashing here and there.  But they lay large white eggs every day.  We like them because of their eggs.

To their left are Dottie (left most white hen) and Zoner (another white hen).  Zoner's pretty old, and is still as stupid as they come - she's one of our original chicks.  Dottie is small and a tough little bird.  Dottie is the daughter of Muffin the Americauna and a white leghorn hen.  Muffin is there in the photo, too.  You can't miss his big black and green tail. 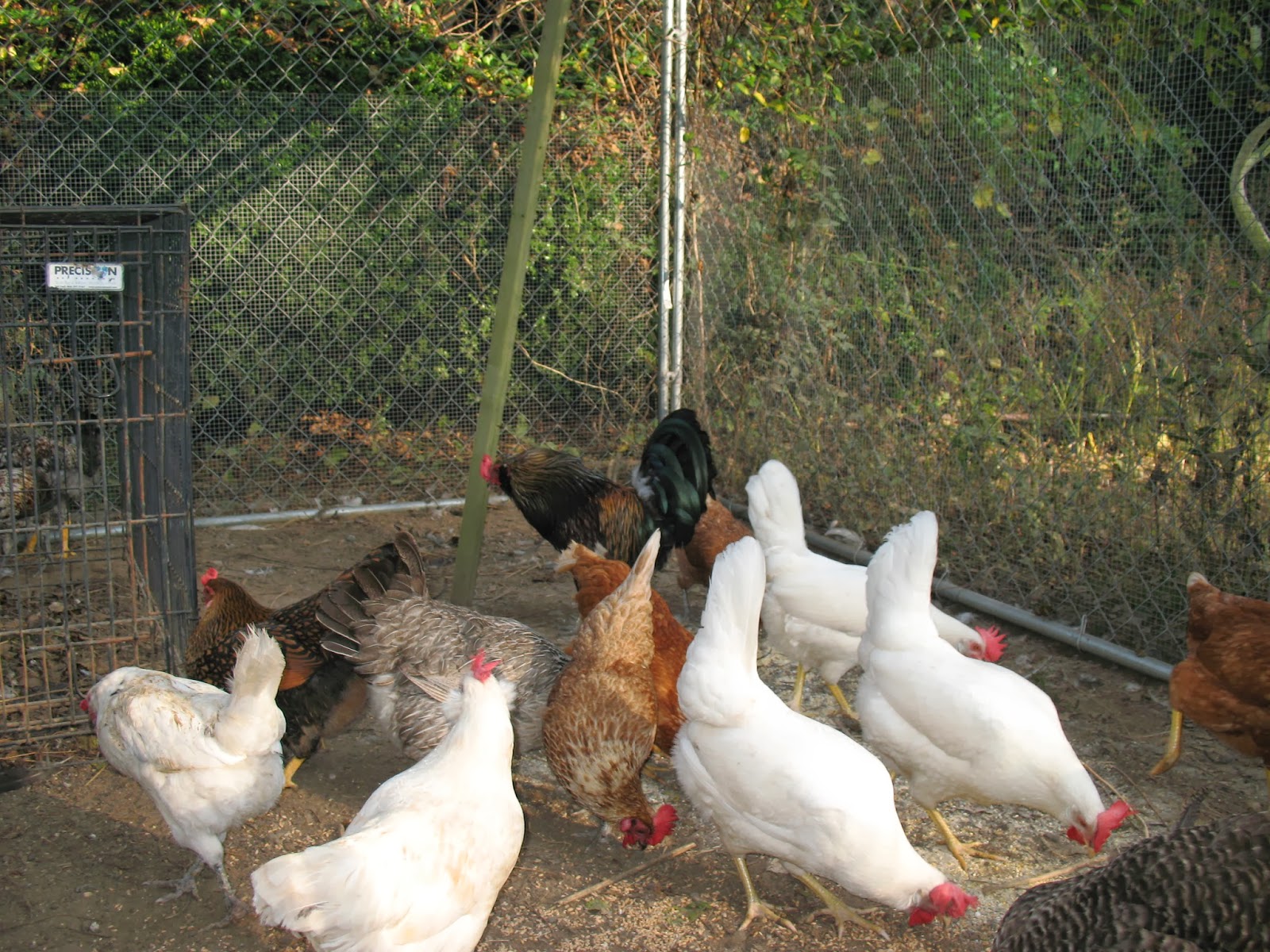 Here's an upclose shot of the 2 Ruffles and a Pringles.  Pringles is having a conversation with the Ruffles.  The Ruffles are our prettiest birds, but they aren't our favs.  They lay medium to small light brown eggs, and they don't lay every day like the Pringles and the Doritos.  They are not friendly at all, and hate to be held. 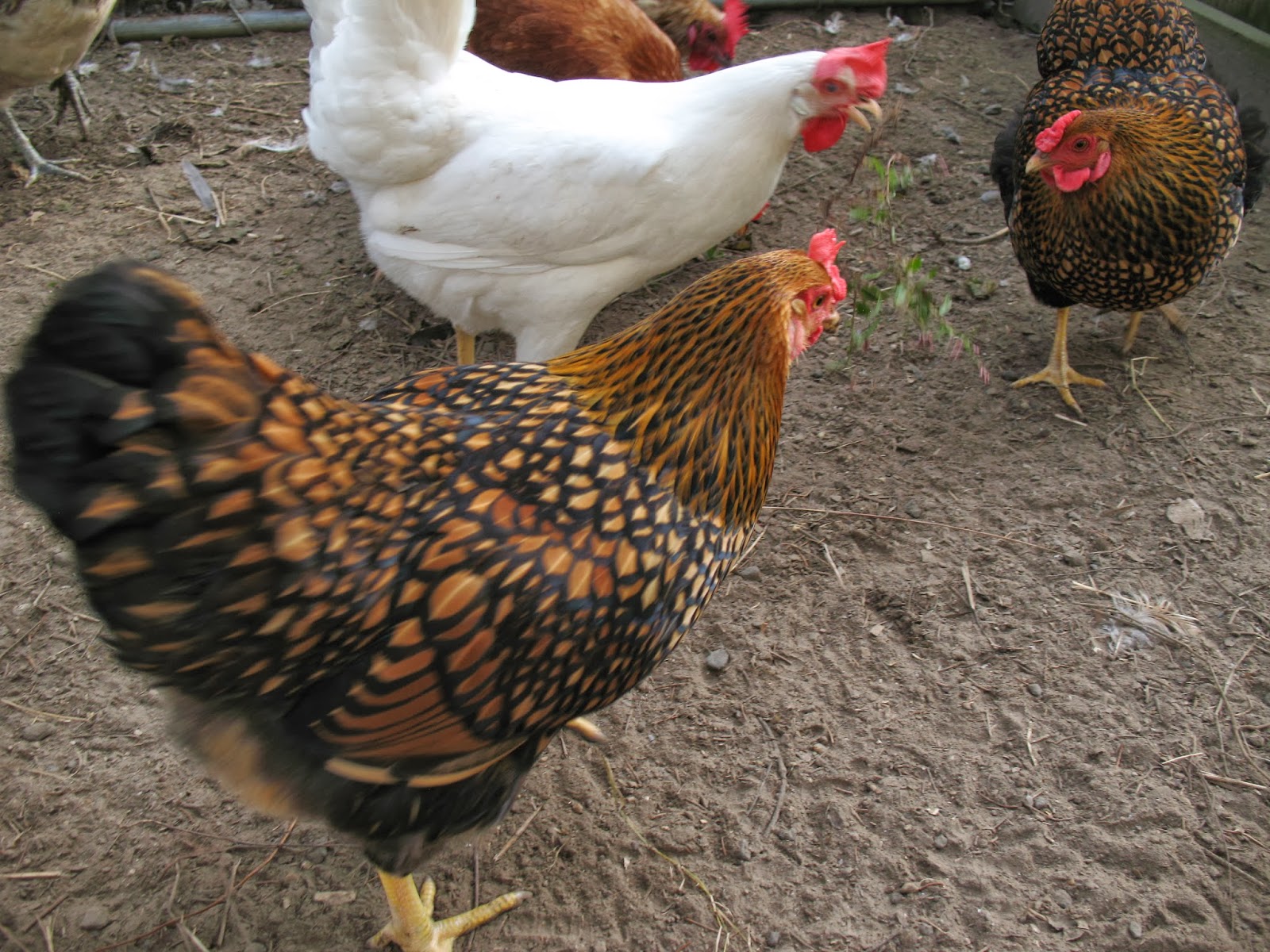 Here's a Pringles cruising around with her white tail held high.  The brown and grey pullet to her right is named Pickles, to honor my friend Genny's bird named Pickle.  My Pickles is a beautiful pullet - I'll have to get better shots of her in the future.  The picture below doesn't do her justice.  She came from the farmer's market as a day old chick, and she sadly ended up being one of the Reject Chicks, which makes her one of my favorites.  She is red and grey and is most likely an Americauna mix. 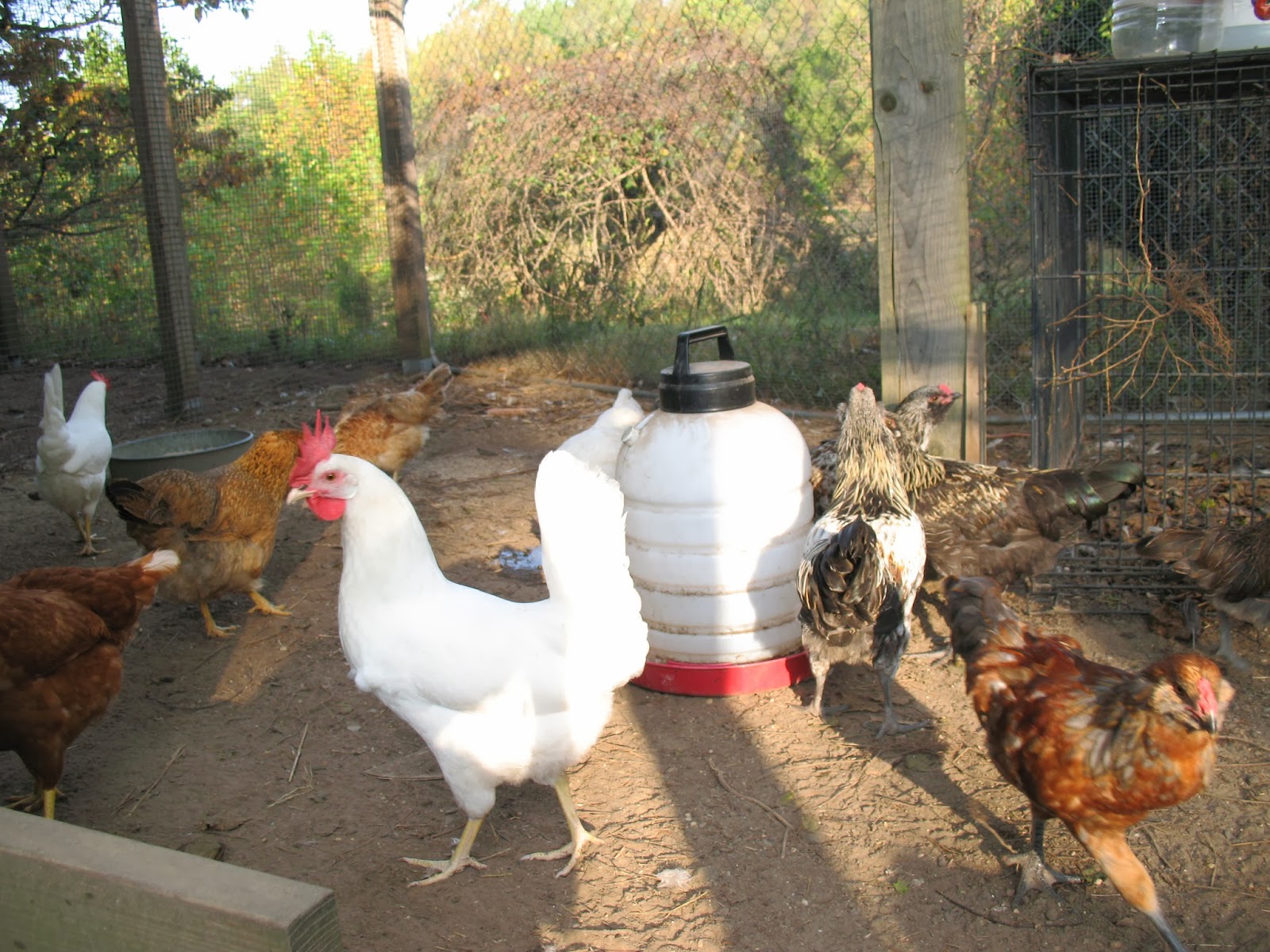 This blog post is ending on an eerie note.  I was taking the below shot of Big Bonnie (and she looks terrible - she's molting!) - but notice all the circles in the photo.  They are what people refer to as orbs.  I often get orbs in my photos and have to work at cutting them out or not using the photos with orbs on the blog because they are distracting.  Are orbs ghosts or just dust?  I get orbs when I photograph outside or inside, in any weather.  It's funny how many orbs are in the shot below.  I must have a lot of ghosts or dust around here.  It is a historic old farmhouse, I wouldn't be surprised if there's ghosts and I know there's dust.  I just thought I'd throw in this photo to show you what I deal with when I'm setting up blog photos.  I'm curious on your thoughts about the orbs, too! 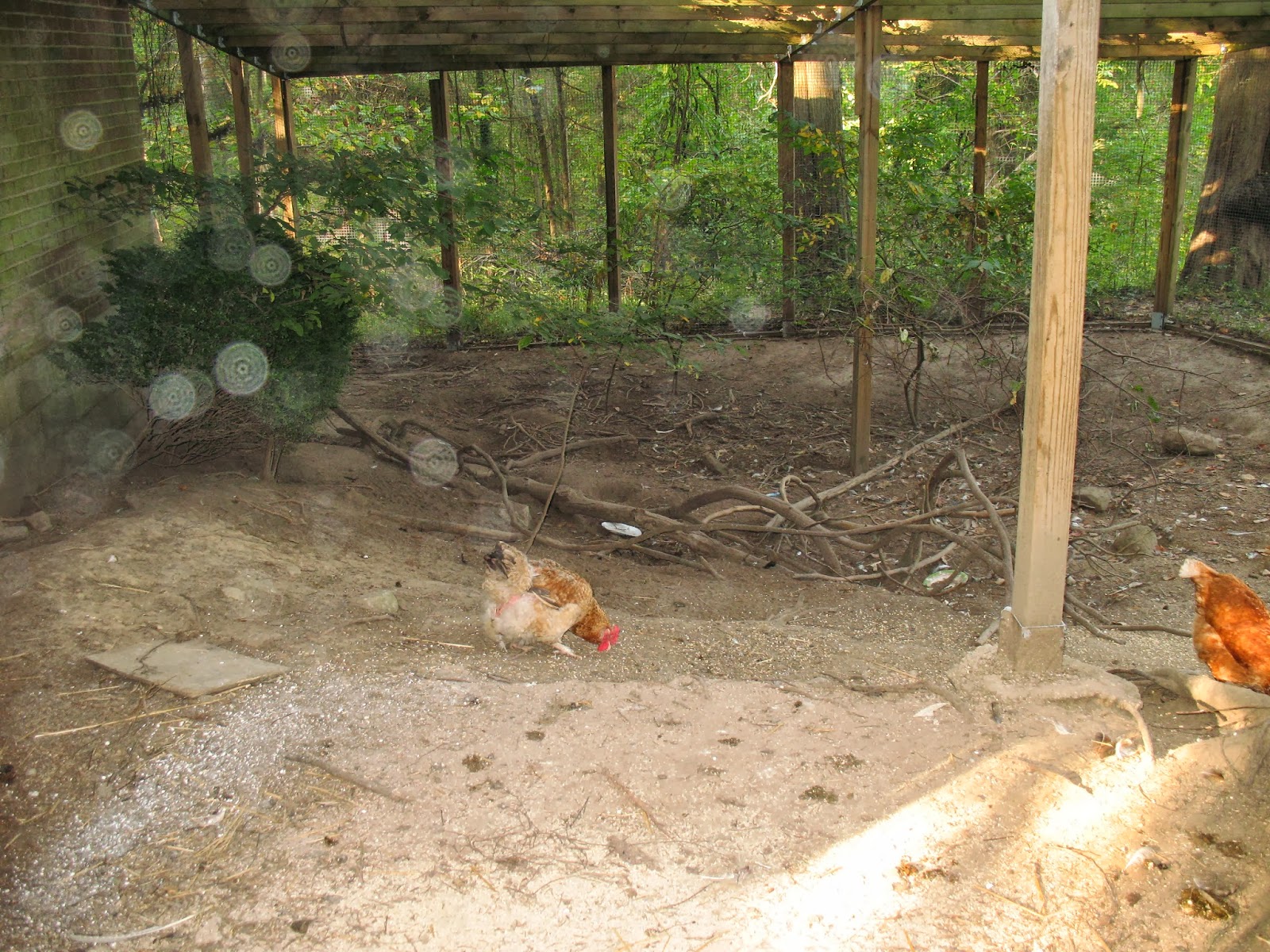 I know it's been quite a while since I've posted about my wonderful chickens.  They are doing fine and the chicks have grown up.  I'd like to introduce you to some of them in a few chicken posts. 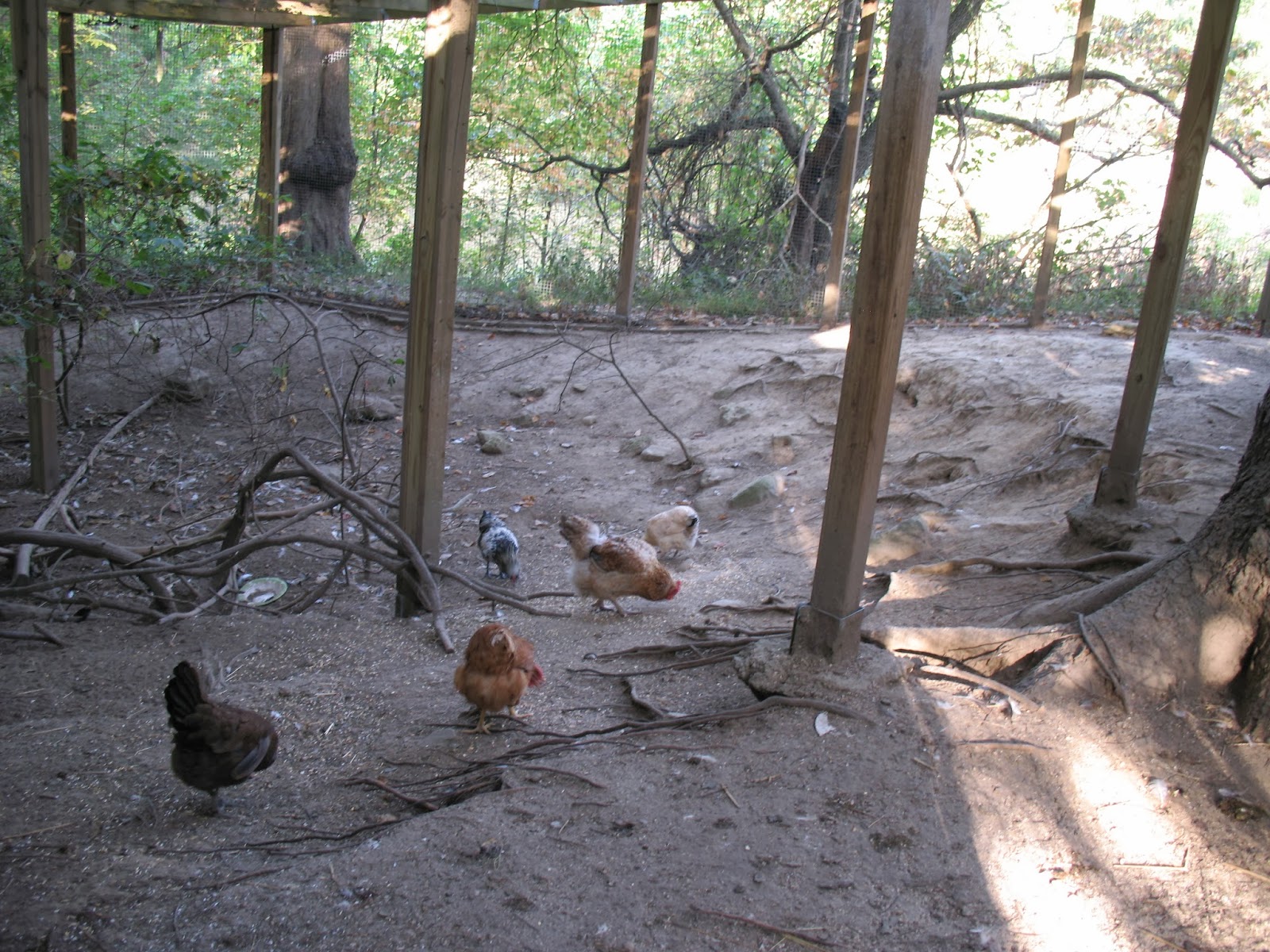 Right in the center of this photo is Big Bonnie, one of the shelter hens.  She's molting and looks rough.  She's still huge.  She's one fat hen.  She's not the most athletic bird, but she walks around fine now.  She lays a huge egg every day.  If you've seen my blog you know Bonnie and her sad story and how she ended up in an animal shelter before we rescued her. 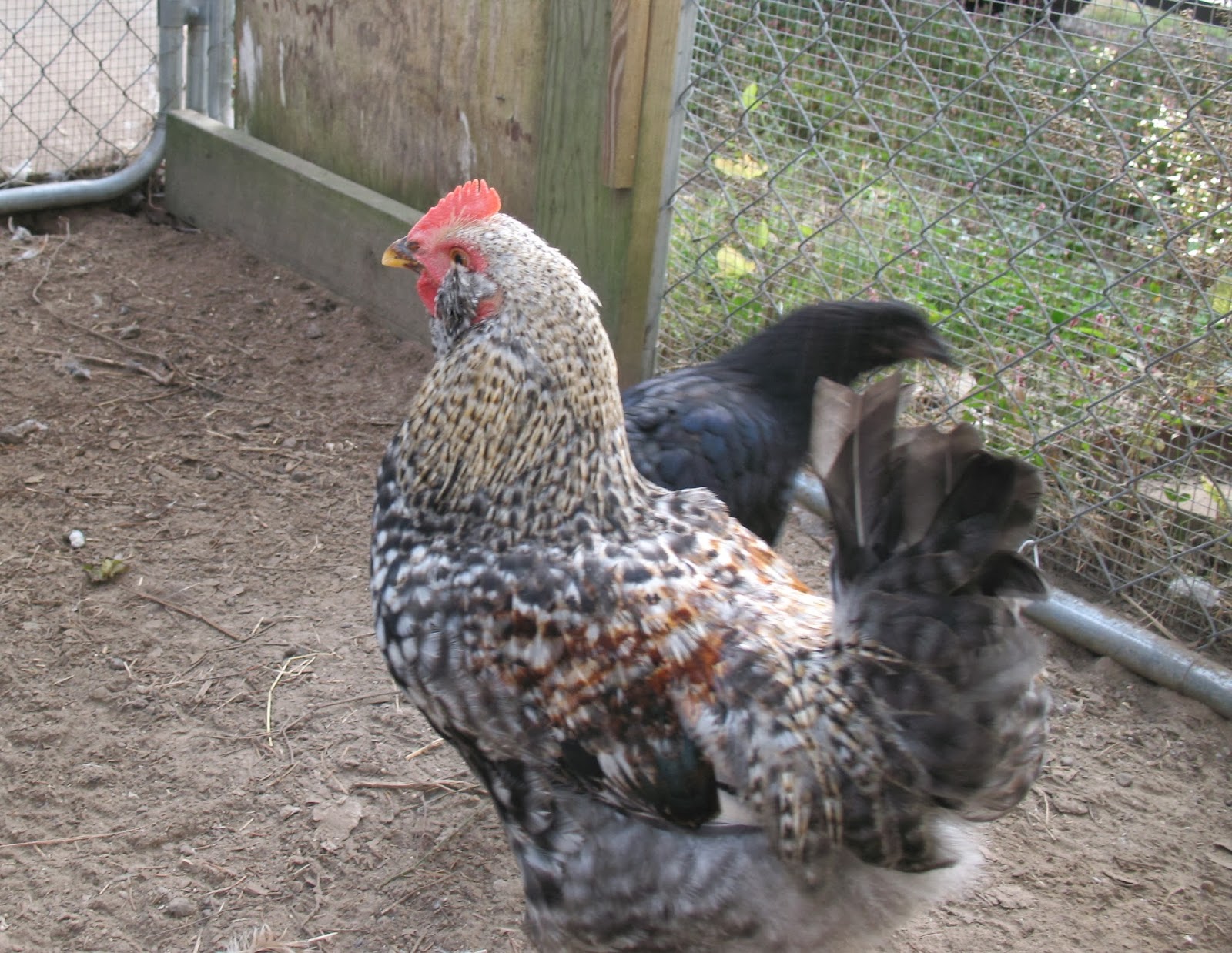 Big Bird is the son of Big Bonnie and Muffin, the only adult rooster we have now.  Muffin is an Ameracauna rooster.  Big Bird is very friendly and loves to "talk" and chatter. 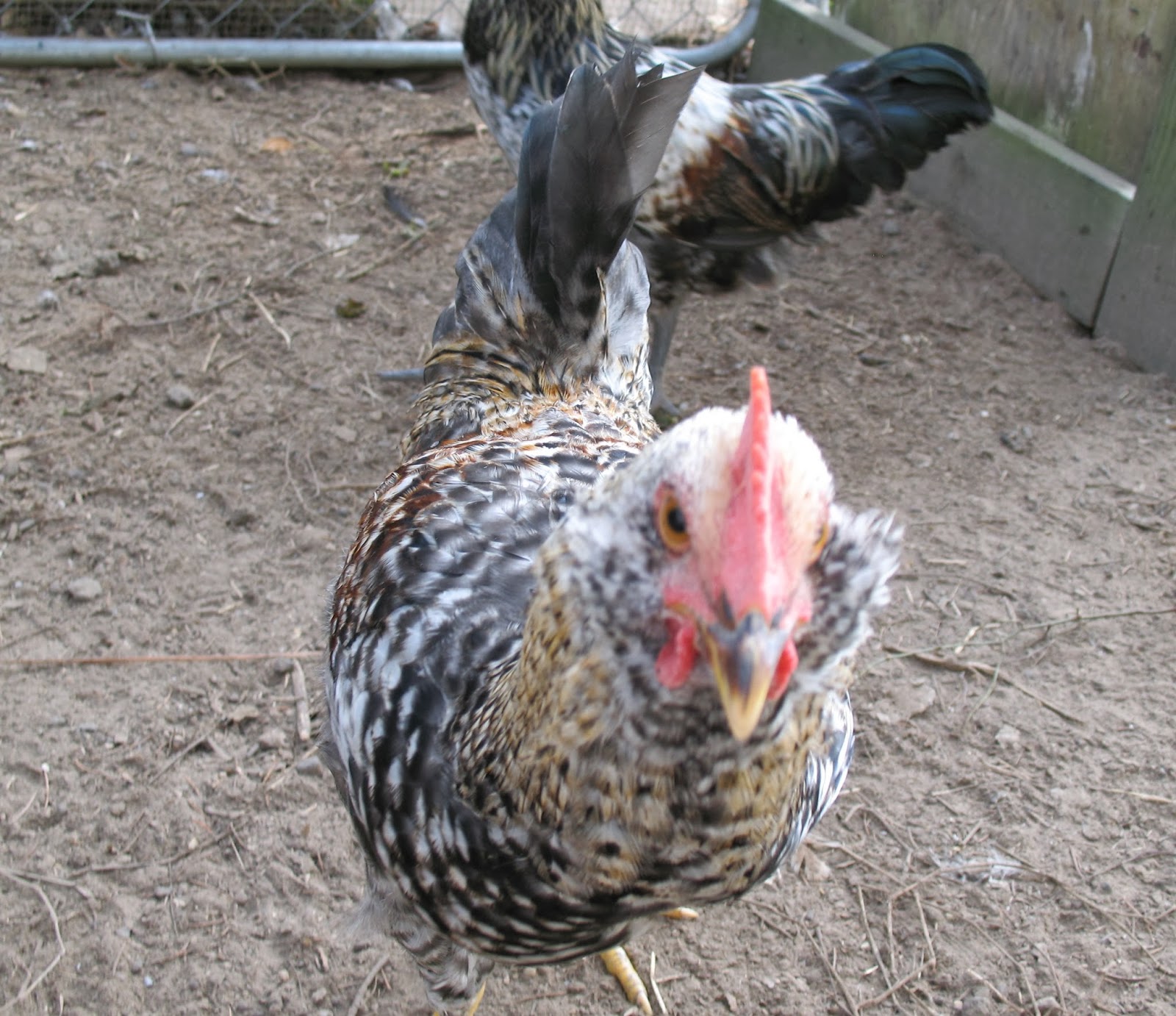 He is going to be a large rooster.  He seems to be very smart and attentive, like his father, but he gets beat up by all the chickens who are older than him.  He's still a baby and prefers to hang out with the other babies from his clutch. 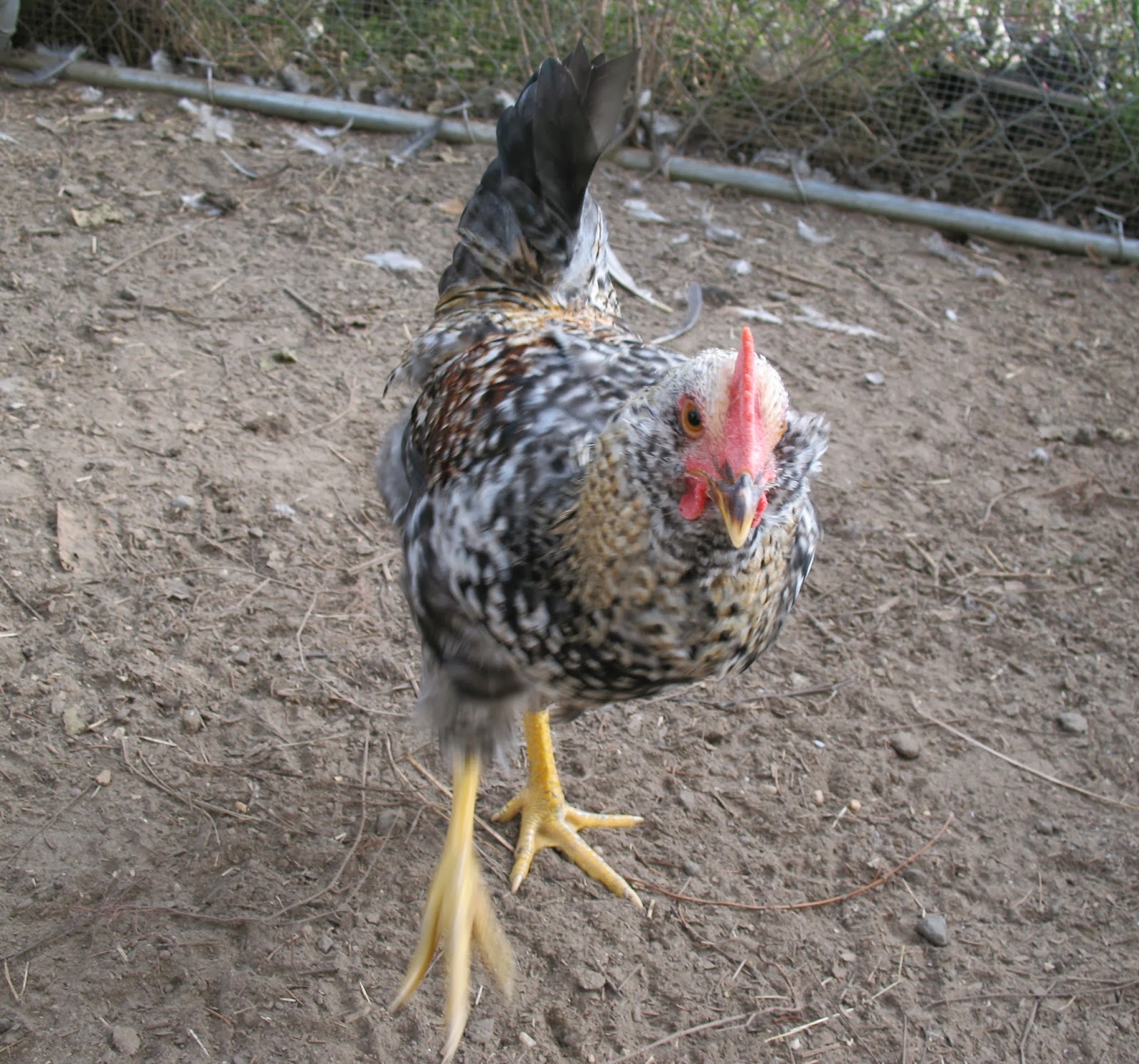 In the below photo is Candie, a Cuckoo Maran hen.  She's the black spotted hen who's molting and looks terrible.  To the right of her is a pure black pullet who is Candie's biological daughter.  Candie's the mom, Muffin is dad.  This pullet has a sister who is also from Candie and Muffin who looks similar but not exactly like her.  This black pullet is beautiful because she has a blue sheen to her feathers, she has no "muff" (feathers around her face like Americauna's have), and she has no comb!!!

Note:  also in the below photo is a white leghorn pullet named Pringles (on the left) and Little Red, the Rhode Island Red pullet who was part of the Reject Chick group.  Remember the Reject chicks?  What a mess that ordeal was! 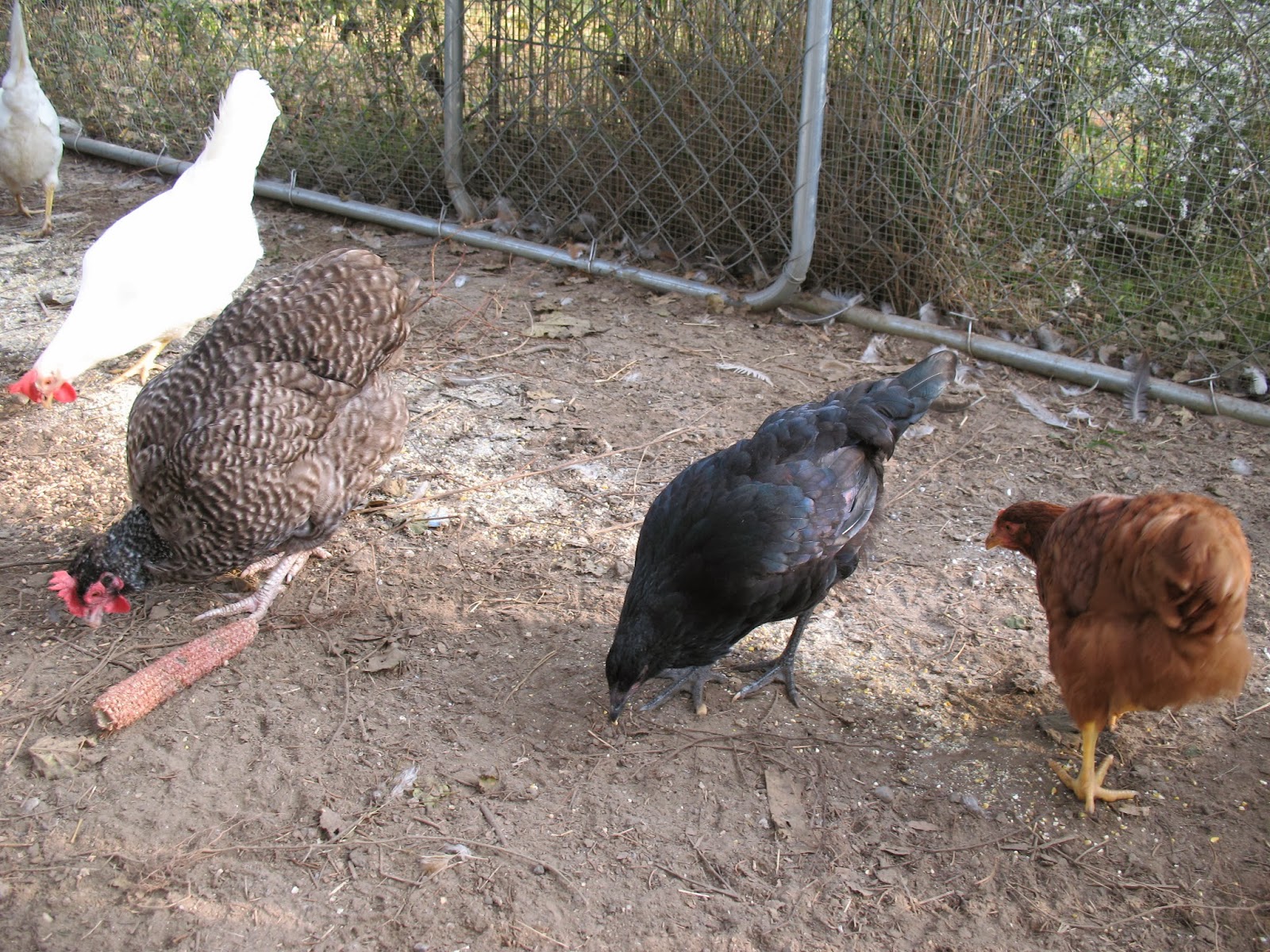 The below photo has a red sex link pullet (named Doritos), Pringles the white leghorn, Candie with her naked molting look, and the blue/black daughter pullet on the right who I need to name still. 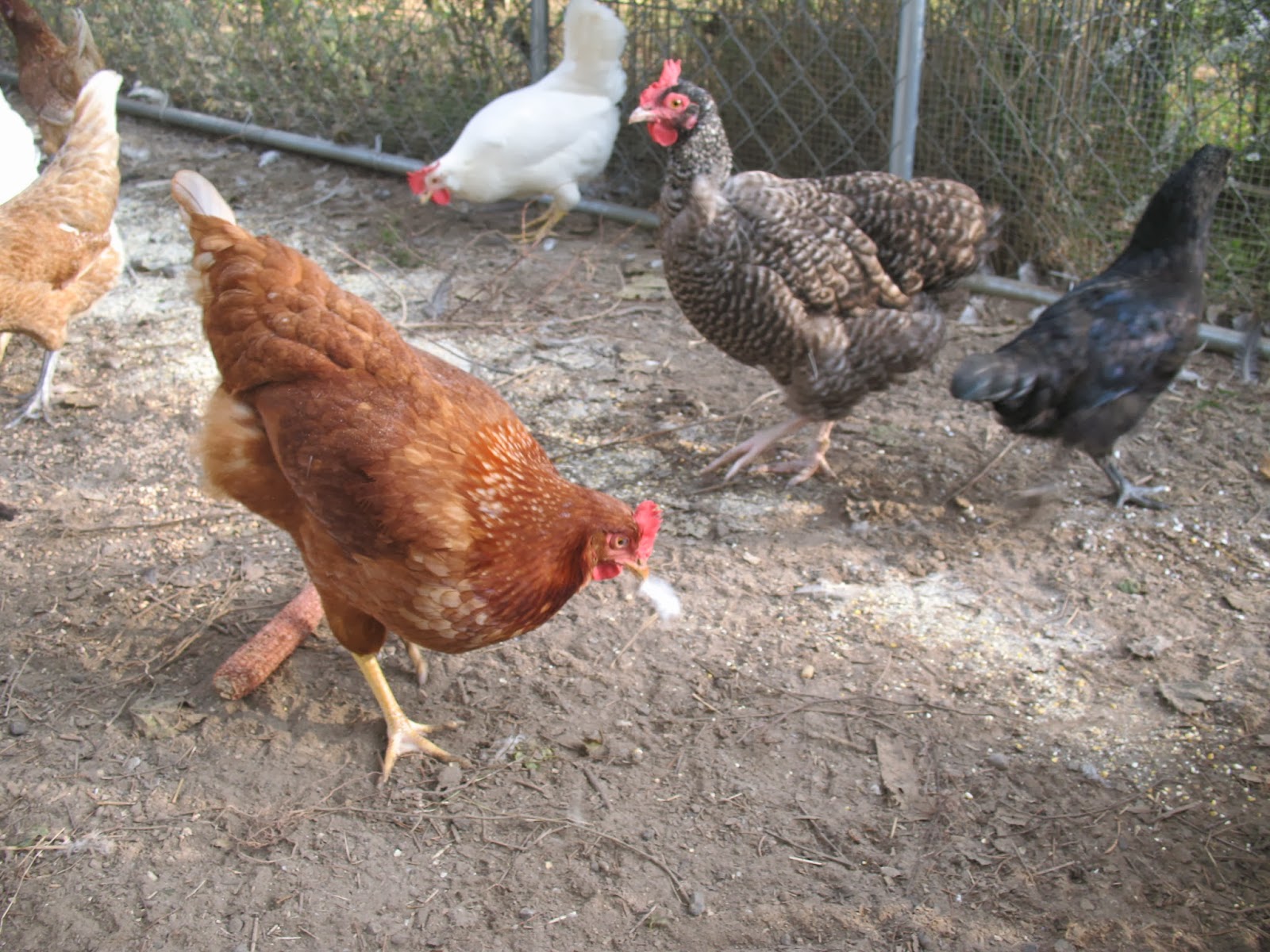 Isn't the blue black pullet beautiful?  It's hard to believe she's half Cuckoo Maran and half Americauna.

I have a secret to tell about her, too.  When she was a chick inside the egg, she couldn't hatch.  She tried and tried to peck out, she cracked the shell, but after a couple days she was too tired and gave up.  In the beginning she was peeping, but after a few days she gave up and was quiet.  I read everything online that said to let her be, let her die, she wasn't meant to survive, she was too weak to live, etc etc.  However, I couldn't let a living creature just die, so I helped her out of her shell.  I cracked little pieces off around where she started to crack it.  She moved a little in the beginning, but after a few hours she stopped moving again.  By the end of that day she appeared to be dead.  So I opened up the remainder of the shell and let her loose.  She just laid there like a dead baby for a few hours, but she was still alive.  I put her under the mama hen's wings with the other chicks and checked on her often, and after a while she came around and started moving.  She was weaker than the others for her first few days, but then she became healthy and active and was fine.  She seems perfect now, you'd never know she had a rough start to life.

Her sister is pure black but with a bronze glow to the feathers, and the sister has a muff.  The sister also has no comb! 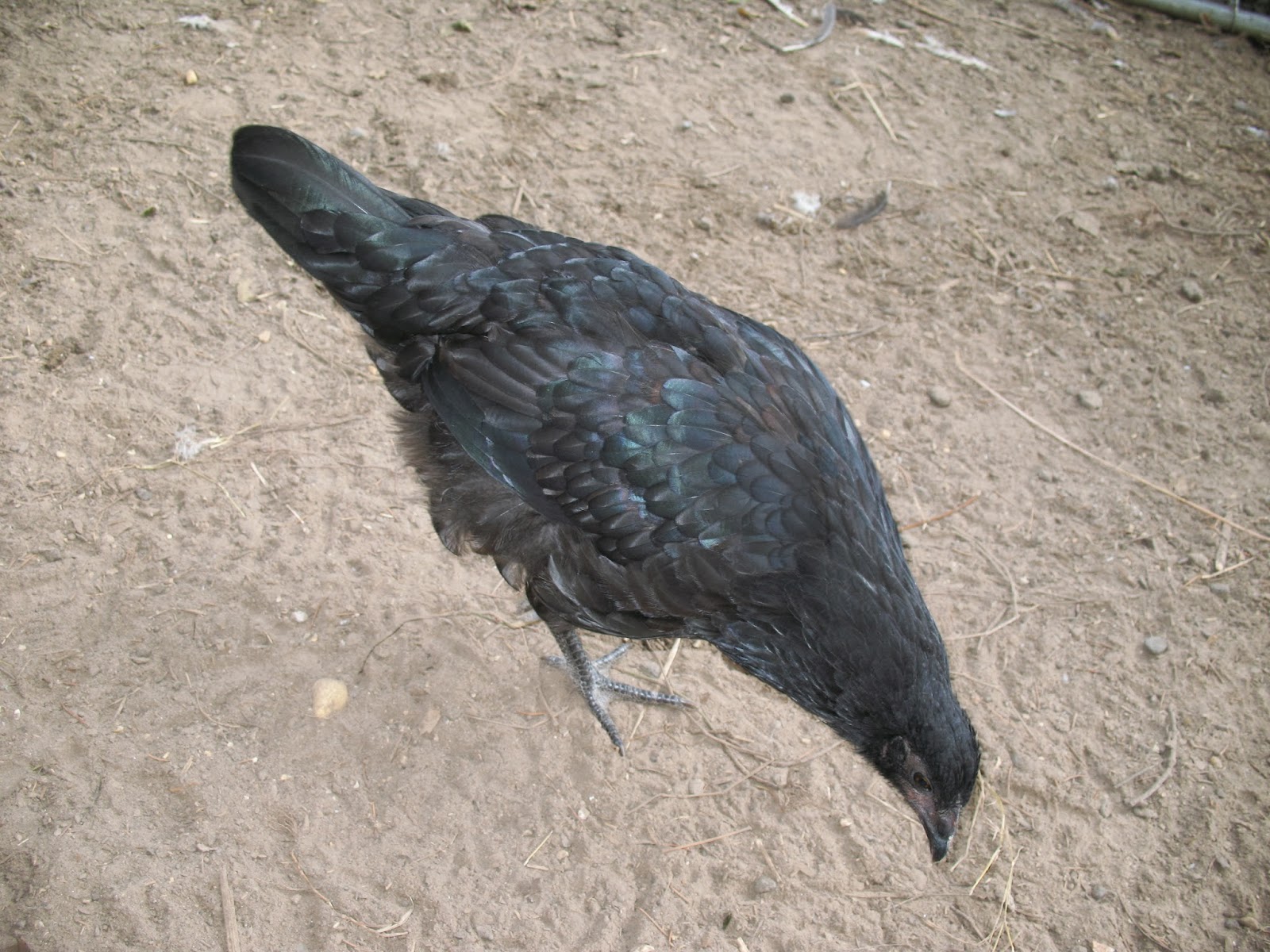 I welcome recommendations for names!

Ok, that's it for today's post.  I'll introduce more of the chicks and pullets in future posts.  Everyone seems to have a story and I'll tell you about them all!
at 9:45 AM 6 comments: