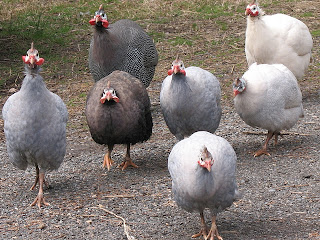 One of the guineas was killed Monday morning.
Presumed homicide.
Right on my front lawn.
And the body has not been recovered.
I checked the guineas at 6am on Monday morning, they were sleeping in the huge pine tree where they always sleep.  It was still dark out.
At 7am the sun was rising, and a crime scene was found on the front lawn.
BACKGROUND:
The guineas sleep in a tall pine tree overlooking the chicken coop.  Recently, since the time sprung forward, the guineas have been coming out of their pine tree bed early, before sunrise, and gathering in front of the chicken coop, honking loudly, until the sun rises.
VICTIM:
The victim was one of the 5 coral blue guineas.
EVIDENCE:
Clumps of feathers were around the lawn, and lead into the woods on both sides of the house.  A search party was arranged and the area was searched far and wide in both directions, but no body was ever discovered.  The crime scene was analyzed, but no evidence was found other than coral blue feathers.  No blood was found anywhere. And one of the coral blue guineas is now missing from the guinea gang.
WITNESSES:
The remaining guineas were all on the ground at 7am after sunrise, terrified after watching the murder of their brother.  They all stayed close to the chicken coop that day, under the protection of low bushes.  And the remaining guineas aren't talking about what happened.  Their normally loud mouths are shut. They hardly talk about anything anymore. They used to be so loud, but no longer does the sound of guineas echo on the hills.  Maybe they are in shock, traumatized from witnessing the murder.
SUSPECTS:
We don't know if the suspect was a coon, we have plenty of coons, but I cannot imagine a coon killing and dragging away a large guinea.
Or maybe it was a fox.  The guinea body could have been dragged into a unknown fox den to feed young fox kits.
Or possibly it was a great horned owl - one used to live beside the field down the dirt road.  But would an owl be able to kill and remove a full-size guinea?
It wasn't a skunk, no smell was noted.
But maybe a mink?  We've never seen a mink near the house, but one was found about a mile away.
Unknown suspects - they are many unsubs out there, lurking in the woods, beyond detection.
RESULTS OF INVESTIGATION:
This case remains open, pending further investigation.  It is believed to be a murder.  Since Monday the remaining guinea gang has started wandering the property again, but they are unusually quiet.  They have stopped sleeping in their former location, in the pine tree.  Now they sleep in dense overgrown trees which are covered in vines.  Possibly they believe the vines and overgrowth provide additional protection.  But a coon could easily scamper up the vines to get to the sleeping guineas if he wanted.  Makes me think they aren't thinking about coons, but brings an owl to my mind as the suspect.  An owl or a fox are the prime suspects.
Investigation continues...
at 11:52 AM

Oh no! So sorry! It's awful when murder occurs in the barnyard. Maybe you need a Sherlock Goat to help you with your investigations? I hope the other Guineas remain safe.

I'm so sorry, but at the same time love your sense of humor in your writing. Be safe Guinea flock!

Hmmmm, suspects everywhere. Hmmmm.
My first suspect would be an owl. Yes, yes, and owl. My brother just informed me that a owl swooped down and took off with one of his beloved ducks. So I am guessing if an owl can swipe a duck, then one can swipe a guinea.
Sending protective thoughts for the remaining guineas.

This is sad, but, unfortunately it happens. This may turn into a cold case file. Hopefully no others are taken.

After doing lots of CSI investigations involving the death of some hens, To me it sounds as if a Momma fox with kits has to be the perp. The babies should be in the burrow about this time of year and she is hungry after nursing said babies. Have you ever seen one take something, it is silent and they run in grab and float away. With the no blood just some feathers I would say it was something like that. Still poor Guineas.

Oh no! I had the same thing happen with one of my chickens. Just feathers--no blood or body.
Guineas look big, but I suspect they are mostly feathers like chickens are. Since your guinea is no where to be found, I also think a Great Horned Owl carried it away. OR---Do y'all have coyotes? They are the only two predators big enough to carry it away.

May it please the court, the great horned owl should be presumed innocent. My client is certainly capable of murdering a guinea, but let the evidence show that GH Owls weigh about 3 pounds. Therefore, one could not cleanly carry away a guinea in one piece. Innocent, I say, innocent!

Isobelle - Hmmm, maybe if I had a goat he would have been a witness and could have told me what happened. Or maybe he would have scared away the suspect before the crime occurred. That's a valid point, to bring in a goat or two to keep this from happening again... It will be brought before the judge, Randy.

CA Grammy - Thank you! I hope they stay safe!!! No more death!

AJOaks - One vote for the owl as a suspect. Thanks for the thoughts! we need all the help we can get!

Awwww, dangit. :-(
Sorry, Lynn - what a horrible thing to wake up to. I just don't know what to think about the perpetrator.
I, myself, am having horrible issues with neighbors' dogs - which makes me think dogs could be the culprit in your case? Do you have any stray or dogs who run free in your area?

Toni - Im thinking that it may turn into a cold case file because we don't have proof. But as long as the predator is out there, it will probably happen again. I just don't know how to stop it if it's a wild animal. We live in the woods, we moved into their woods. And brought dinner for them. Sadly.

Farm Girl - Personnally, I think it was a fox. They're fast, and they are everywhere. I've never seen them hunt anything other than mice, though. But I can't blame them for feeding their babies, can I?

CeeCee - no coyotes in this area. At least, not that I've ever heard about. We did have that owl who lived down the dirt road, which isn't even half a mile away.

Danni - Hmmmm, that's something I didn't even think about. Wow, there are some dogs around, although I haven't seen any near the house. This will be considered. I hope it is a dog, that went back home and was punished for bringing home a dead guinea, and now the owners wont let it loose again. Thank you for the ray of hope, however small. I needed some cheering up tonight! :)

Its a good thing "Criminal Minds" is on tonite - we'll see how they profile their unsub and see if it matches with your crime scene.

In the meantime, I'm going with a fox. Our stupid fox snatched up all 3 of my guinea hens last summer.

And you know - those silly guineas screech like howler monkeys UNLESS they are being attacked...they they are silent as church mice. Whats with that?

Sorry for your loss. Lemme know if you want to round up a vigilante gang.. I'll ride with ya.
;-)

Isn't it weird that guineas are loud unless they are being hunted. Strange birds... I hope all mine aren't picked off by a fox. So sad...

I just may take you up on that vigilante gang offer!!! Thanks!!

I am so sorry. The guineas are so free spirited that is is sad to see them changing their routines.

After reading this I went outside tonight and scared all my guineas out of the trees and back into the coop for the night, just in case.

i would be heartbroken! one time i had a huge owl fly close maybe 8 feet above my head a couple of years ago. it was dark except for the dusk to dawn night light...i saw a huge shadow and looked up...they are silent...who knows which predator it was...so very sad...can't remember which fox either the gray or the red climbs trees. not both...

thank you for sharing with us, I conceive this website truly stands out : D.

Chai Chai - I WISH I could get my guineas to sleep in the chicken coop. They are too free-spirited, they love their freedom.

KK - Once I had a bat bump me in the head when it was flying by and I was out walking at night in the pitch darkness. I was terrified, I dropped to the ground, my hands flew up above my head, I dropped what I was carrying!!! Of course I screamed! I think I would have a heart attack if an owl flew above me!

Anon - Thank you, it's nice to have visitors!

So sorry you lost a guinea! Hmmm, the flew clumps of feathers even further confirms my belief it was GHOs!