It's been a week since I posted about the chicks - they are growing up.  They are getting feathers, tails and combs.  They grow so fast.

There have been some tragedies - we lost 1 chick and 1 guinea keet because of the momma hen.  The guinea flew over the mesh barrier that divides momma hen's side of the coop, despite the fact that the barrier is 6 feet tall.  Needless to say, momma hen doesn't like guineas.  That night everyone got their little wings trimmed.  Then another day momma hen crushed one of her own chicks by jumping on it by mistake.

We used to have 1 Araucana which seemed to have a twisted leg when he was real small.  Luckily that grew out & is all better now - she's running just fine.  One yellow Bantam chick had one tiny speck of black on a wing feather on each of her sides, and for some reason the others started pecking at the black dot on one of her wings.  Within just a couple hours she lost half her wing. 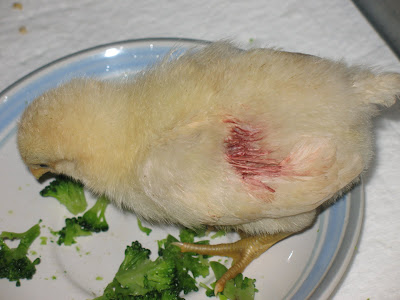 We immediately separated her from the other chicks, brought her inside & created a chick infirmary.  After giving her a bath we determined it was only her wing which was damaged, no injuries to her body.  She wasn't very happy about being separated from the clan, screamed constantly when we weren't holding her.  She would sing beautiful songs when we were with her - she sounded like a songbird.  The first day she wouldn't eat or drink, so we brought in another very calm, small chick from the coop during feeding times, and the friend encouraged her to eat & drink.  We had to be very careful the other chick didn't peck her, and the friend couldn't stay unsupervised in the infirmary with her.  Eventually her wing healed up, feathers grew back, and she looked almost normal again.  Because she still hated to be alone, we played XM radio for her, and eventually the other chick moved in with her full time until she was all healed.  She still had a black spot on the feathers on each of her wings - we carefully trimmed it out and then she went back in with the flock.  She's doing fine now; we're going to have to keep on eye out for her spots to make sure she doesn't get attacked again.

Momma hen with her chicks 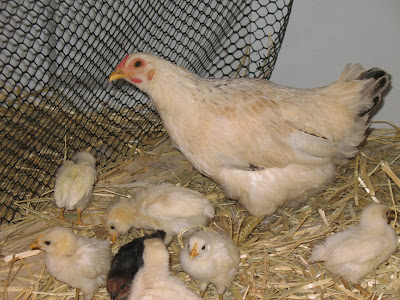 The injured chick all better now 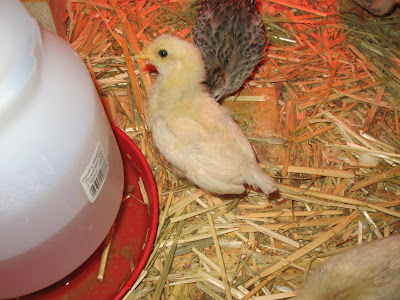 My favorite little man, the leghorn, has a bigger comb than everyone else. 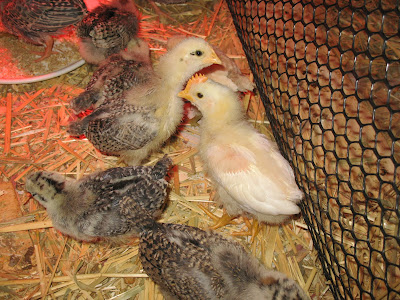 Some of the chicks love to sit on my arms - here I have 2 of them, and 3 others are waiting to jump up 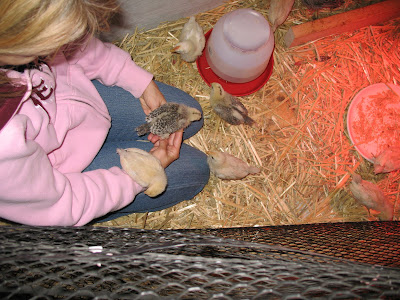 The chicks have grown so much in the past week!  I consider the 18 chicks without a momma hen and the 5 guinea keets to be "my babies".  The hen is momma to her 8 chicks, which are maintained separate from my chicks.  My chicks are much friendlier than the others, they love to be held & fed.  They run to us when we enter the coop, and taste anything we feed them.  The other chicks with the hen are timid and eat only what momma hen approves.

The baby chicks love treats.  That's how we've taught them to come to us - we give them a treat at least once a day.  They love squash, broccoli, corn, lettuce, spinach, and especially earthworms.  We cut up the veggies into tiny pieces for them.  The earthworms are their all-time fav.  The chicks with their momma are not too sure about eating the veggies, but they also love earthworms.

The baby chicks are developing feathers on their tails & wings.  They have learned to roost somewhat, at least when they are awake.  One of the funniest things about the chicks without a momma is how they sleep - they lay down flat on the ground.  We thought it was because we started them in a glass aquarium which had a heating pad underneath.  They would fall sleep flat out on their sides or stomachs, with necks stretched out and heads laying on the ground off to the side or in front of them.  And they would all sleep on top of each other, in a big pile, chick heads & bodies everywhere.  But even after they've moved into the chicken coop, they still sleep like this.  If they fall asleep on the short chick-size roost in their chicken coop, their heads eventually fall to the ground when they pass out, causing them to fall off.  Our chicks & keets take sleeping serious, I guess.

The guinea keets get along fine with the chicks - we were wondering/hoping all would go well with them growing up together.  The keets are somewhat older/larger and are much more aggressive when it comes to eating treats.  We just have to make sure there's always enough treats to go around so no one gets left out.


This shot is kind of red because I took it under the red heat lamp in the chicken coop. 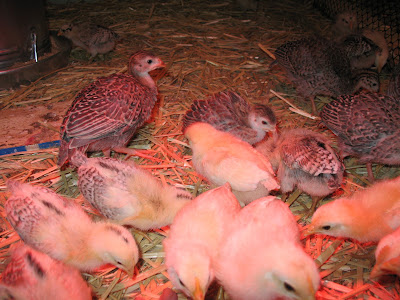 Chick sitting on my legs, others looking for treats from me 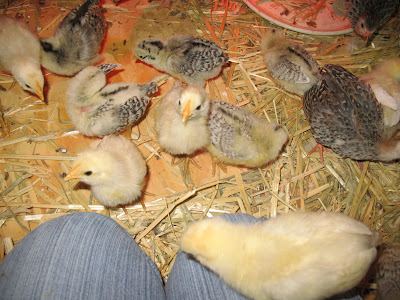 Momma hen and her babies on her back 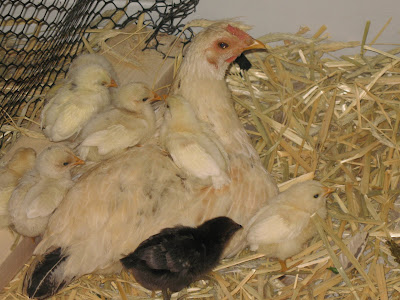 The chicks love to warm themselves under the heatlamp with their wings spread out like this. 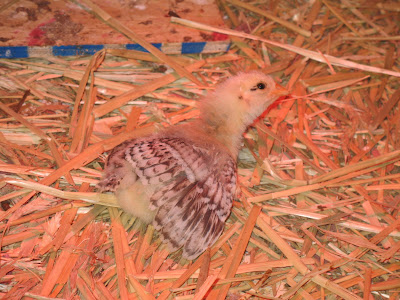 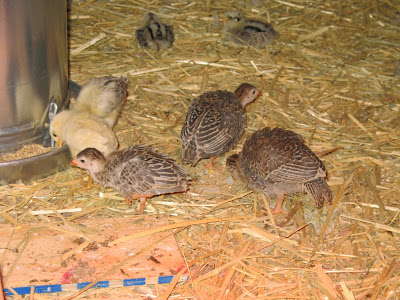 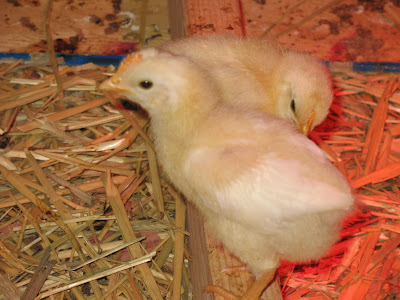 This chick is getting sleepy 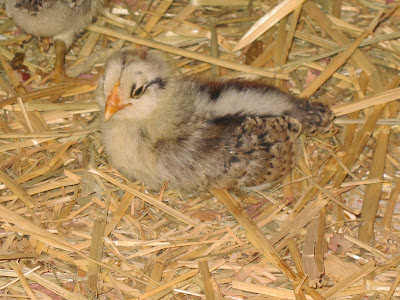 Last Saturday the chicken coop/barn/shed was delivered.  Before delivery we had to cut down low hanging tree limbs off many trees in the area where the building was going, and also above the entry road for the truck to drive.  It was a cold and rainy day on Saturday when the buidling was delivered. 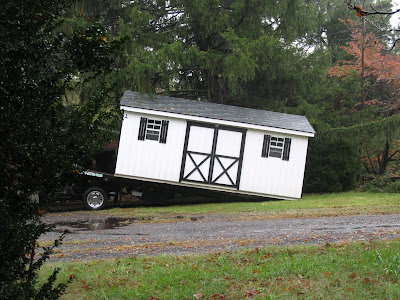 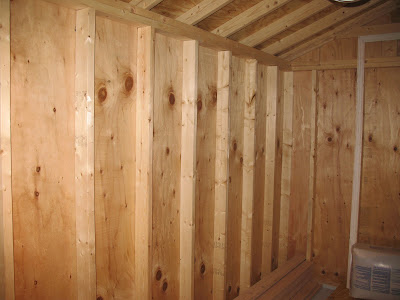 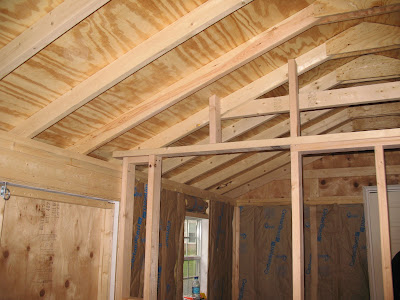 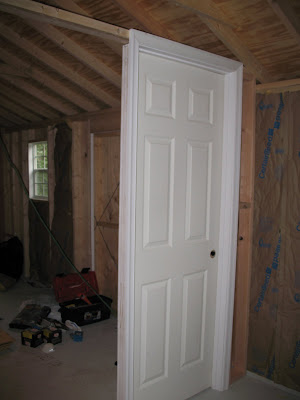 We then put up plastic chick separator mesh to keep the chicks we have raised so far without a mother separated from the hen which has 8 chicks.  We didn't know how the hen would deal with all the additional babies and especially with the guinea keets.

After putting down straw, heat lamps, feeders and waterers, finally the big moment came last Tuesday evening.  My baby chicks were big enough to live in the chicken coop by themselves.  They were so excited - they ran all around and tested their wings.  They nibbled on straw and ate food from the big feeder.  It was the biggest day of their lives, and they were so happy. 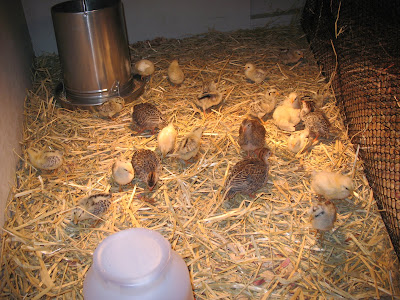 The momma hen loved the freedom, too!  Her babies were very excited to see the other babies.  At first she tried to control them by keeping them near her, but eventually she let them run near the other babies.  The mesh netting keeps them separate, but they can see each other.  Here one of her chicks gets a free ride on her back. 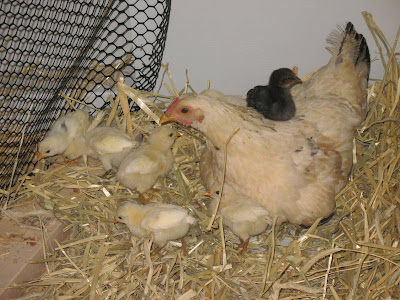 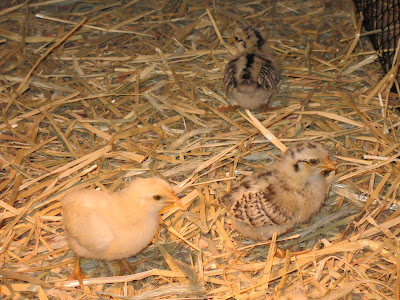 Today we increased our flock by 1 white Leghorn chick and 5 Guinea keets.  Randy wanted Guinea hens because they are good bug-eaters, and we have ALOT of ticks outside in the summer.  We plan on letting the birds free-range when they are adults.  We got the Guineas and Leghorn from an Amish family - we really didn't want the Leghorn, but they gave it to us for free because it was raised with the Guineas & they didn't want to keep just one chick.  The Guineas and Leghorn chick are larger and more developed than our Bantam and Araucana chicks, but we put them all together so they will get used to each other now.  The Guineas already have feathers; the Leghorn is still a puffball, but has more developed wings than our other chicks.

So, to recap, now we have 5 Guinea keets, 1 Leghorn, 7 Araucanas, and 10 Bantam chicks, plus a Bantam hen with her 8 chicks.  Hopefully in spring we'll have eggs!!  The Araucanas are called Easter Egg chickens, because they lay blue and green eggs - should be interesting.  I was told the Bantams lay brown eggs and the Leghorn has white eggs.


Here's one of the smaller Guineas (the brown one in the pic) and the white Leghorn chick standing tall. 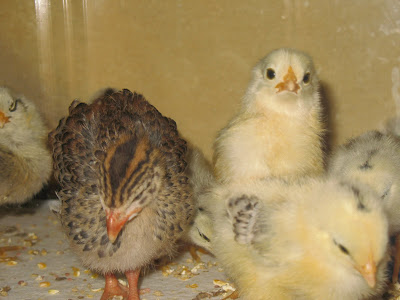 Here's one of the Guineas standing tall. 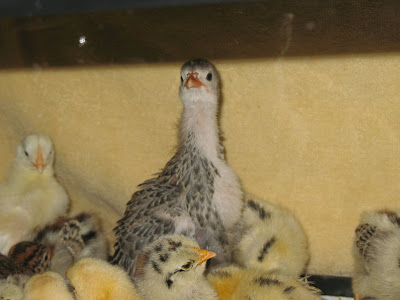 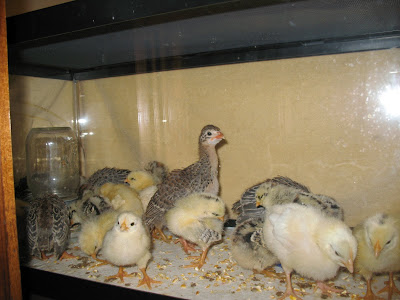 We got the barn/chicken coop delivered today, but it needs some work done before it's usable as a chicken coop.  I'll keep you posted on the progress.
at 5:17 PM 5 comments:

We got a huge box to keep the hen & her 8 babies in until the chicken coop is ready.  We put screen across the top to keep the hen in.  She is happier with more room, and her chicks are, too.  They love to scratch the floor.  She talks to them, and they really pay attention to everything she does.  Her babies are very healthy and are growing fast.  I am trying to think of a name for the hen, but haven't come up with one yet. 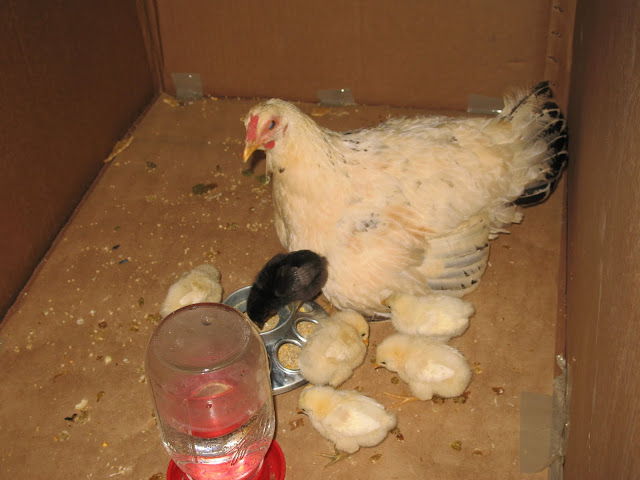 The 17 chicks are still so cute - little puffballs.  They are in a huge old glass fish tank with a heating pad on low underneath to keep them warm.  They are uncoordinated, but very curious & get into everything they can.  They are serious eating and pooping machines.  3 of them had poopy bottoms, which I was told could be bad for them, so I cleaned those little guys twice a day.  I didn't realize I'd have to clean poopy chick bottoms!   They love to roost and will stand on anything we put in the cage. 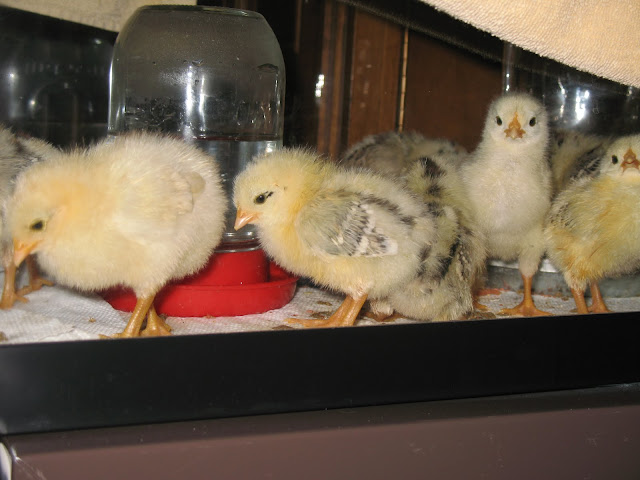 One of the Araucanas seems to have a leg problem - one of his legs are stiff and the toes seem to to point in an odd direction. He is often uncoordinated. Yesterday he seemed listless.  I gave him water from a dropper to ensure he was drinking yesterday, and today he's much more attentive and is doing a little better.  I am keeping an eye on him.

We bought a barn/storage shed/chicken coop today & sealed the floor of it.  Tomorrow it will be delivered.  It was built by the Amish in Pennsylvania.  We will have to do some work to prepare it for the chickens when we get it, so the chicks & chicken are still in our guest room for now!
at 5:47 PM 3 comments:

Yesterday we got 25 chicks and one hen.  We weren't planning on getting chicks or a chicken so soon, but we went ahead & got them.  We got:

Also we got 1 Bantam hen with her 8 chicks

We got them from the Amish farm market which isn't too far away from our house.  The 17 chicks without a mother are separate from the hen and her chicks.  The 17 chicks are much more friendly and bold than the ones with the hen.  They'll sit on my finger, nibble at anything immediately.  They drink so much water and seem to eat endlessly when they aren't sleeping.  These chicks are alittle smaller than the ones with the hen.

Here's the hen with her chicks.  Her chicks are more scared, if I go near them, momma hen spreads her wings & the chicks climb under to saftey.

7 chicks under momma's wings, 1 to go

We are now busy planning & building the chicken coop!  We need to get these guys out of the house!

This One's for Mom

My Mother has been visiting us this past month on vacation.  We stayed busy while she was here, running here & there, going to the farmer's market, going to dinner, driving around the property on the ATV (yes, she drove on the ATV!), and we even had time to cook and bake.  We all had fun, and we all even caught a cold, too!  She went back to her home again a week ago.  I miss her already!

Here's some pics of her cats, Alex and Katie when they were visiting.

Mom & I this week

We went out driving today & passed this HUGE old oak tree cut up in someone's lawn.  I thought it was awesome because it was so large ~ I wondered how old it was.