Went out this morning for a quick walk, excited it wasn't raining.  It's been raining for days here in Maryland.  There was a morning fog; it was so beautiful.  I woke a herd of whitetail deer who were sleeping in the field - look down the path to see a deer bounding across the road.  I got a few more pictures of the deer, but they were tough to see thru the fog. 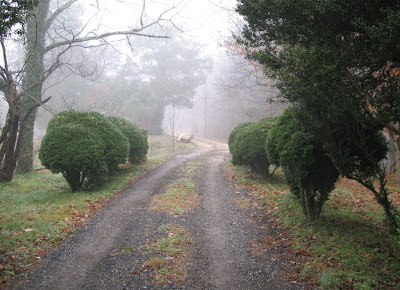 Morning fog on the field 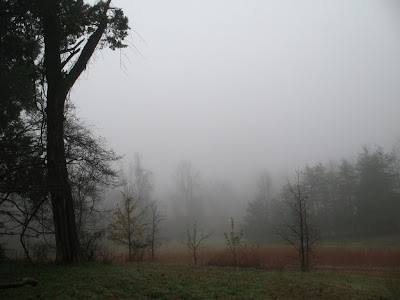 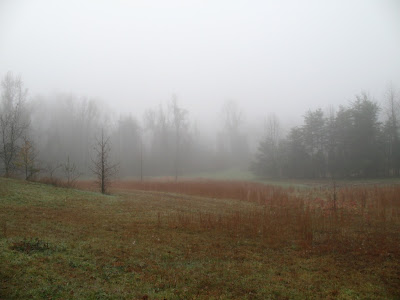 It's been 40 days since we got our chicks, and we are having an epidemic.  The chicks have gotten some sort of upper respiratory infection.  They get puffed up, lethargic, and lose their appetite.  It appears to slowly be affecting most of the flock.  One chick has died, several more are very sick.  A few chicks seemed to not be well early on shortly after we got them, and we moved them inside to the infirmary in the house and paid special attention to them, hand feeding and watering them, and soon they appeared to get better. 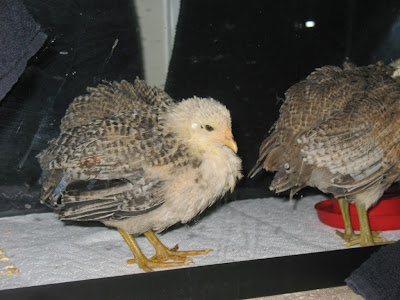 Then they got sick again when they were outside in the chicken coop.  At first it was just one sick chick, then suddenly two weren't normal, and we were worried.  Then overnight six got sick... Time to panic!  We called a thousand vets, it's tough to find a vet who deals with chickens.  And of course this happens on a Sunday, and right before Thanksgiving, too...  We continue to hand water the sick chicks with an eye dropper.  They have lost their appetite, and we can't force them to eat... 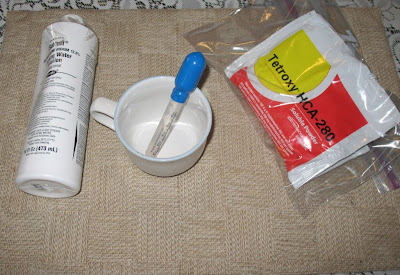 The local feed store sold us some antibiotics and some antibacterial solution, too.  We started with the antibiotics in their water; maybe later we'll do the antibacterial solution, but not now.  Today we gave all chicks a good dose of antibiotic water from a dropper, even those who appear to be healthy.  Some of the healthy chicks loved drinking from an eye dropper - we just had to hold it in front of them and they gobbled the water.  Several of them drank the medicine-water heartily from a mug which we set on the ground.  The sick ones we had to force them to drink.  Poor birds.  The guinea keets are all fine, as are the two biggest chicks.  The infection affects the small and weakest birds first.

We did finally speak to a local vet who deals with livestock, including chickens.  He told us upper respiratory infections are common if we bought from folks who may have had an infected flock.  We didn't know the people from whom we bought the chicks - they came from an auction.  He said the mother hen we bought could have been a carrier of the infection, even though she appears to be healthy.  The vet confirmed we are doing everything right - medicating the birds, keeping them warm, all we can do is wait and hope the chicks get healthy again.  He did say the chickens would be strong and resistant when they got better from this infection.

In the past few weeks the ladybugs have returned to our house to hibernate.  To the inside of our house, that is.

Last year was our first autumn in the house and we were shocked to find hundreds, maybe thousands, of ladybugs migrating inside when the weather first got cold.  Our home isn't well insulated and the ladybugs find a way to get inside.  Last autumn we collected them in jars and took them away.  We exterminated the house last spring, but the ladybugs still returned, although this autumn we have less ladybugs than last year.  In the past few weeks we have collected them in jars once again and let them go down the street - I think we got rid of most of them now.  It seems once we remove them they do not come back.  They are mostly on the sunny side of the house walking on the walls, but they also get everywhere in the rooms on that side of the house.


Here's a ladybug on a sneaker shoelace. 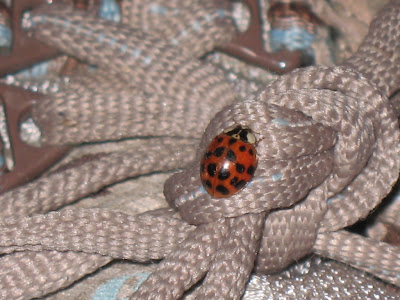 Here are a group of ladybugs in a corner of a room by the ceiling. 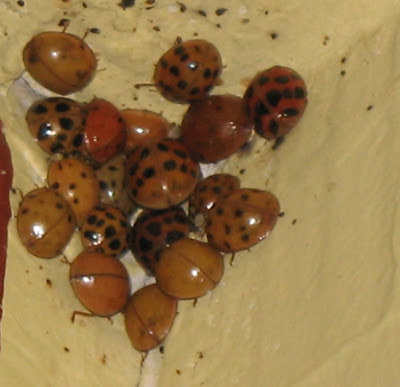 Some of the ladybugs have spots, some don't have spots.  Although I don't hate ladybugs, I really don't like them inside my house, and I'm happy we got rid of them for now!  I think if it were any other type of bug I'd really freak out!  Goodbye, ladybugs...
at 2:27 PM 6 comments:

Another Tree Across the Road

The other night I was driving home from work late at night.  It was dark, cold, and pouring rain.  It had been a long, hard day at work, and all I wanted to do was get to my peaceful, quiet home, eat a good dinner, and get some sleep before going off to work & starting again early the next day.  And then I saw it - the largest tree ever fell and was laying across our dirt road, blocking the only way home.  It was so discouraging to see that tree.  Why do trees only fall across roads at the worst possible time?  There was no way to drive around the massive tree.  It was a huge, old, dead tree.  The recent rain brought it down and made a muddy mess of the road around the fallen tree.

I couldn't get a picture of it as I didn't have my camera with me, and it was so dark and raining it would have been tough.  I called my husband, who luckily was home, and he drove out from home to "his side" of the tree and surveyed the situation from there.  It was no problem for him.  He climbed over the tree and brought me a change of clothes from home so I didn't destroy my work clothes, I changed in the car, then we both climbed back over the tree and he drove me the rest of the way home.  While I made dinner, he and the neighbor made short work of getting that monster tree out of the road.  They cut it up with chainsaws and pushed it out of the way with the tractor.  It was amazing how fast it was done.  What was I fretting about?  No problem for 2 men, a chainsaw and a tractor.

I took these pictures the next day when the rain finally let up. 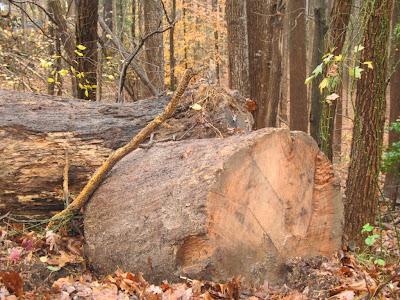 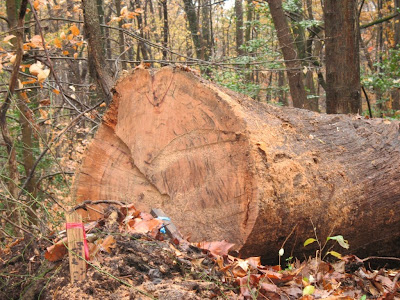 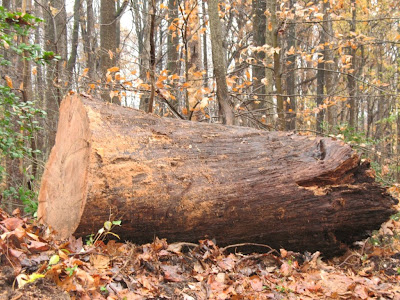 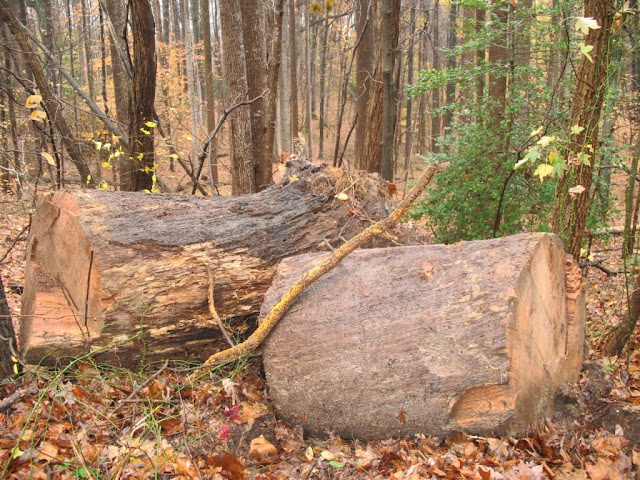 One of my favorite poems is The Road Not Taken by Robert Frost. I can't say these pictures are of a road not taken, because it's the only real road to our house, but it's a road less traveled than the paved streets.  And I love our place down the road less traveled. 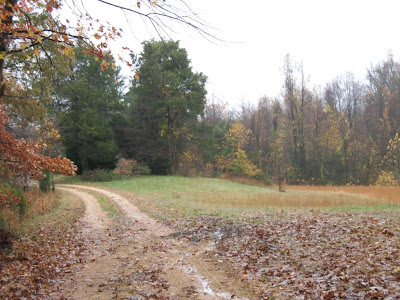 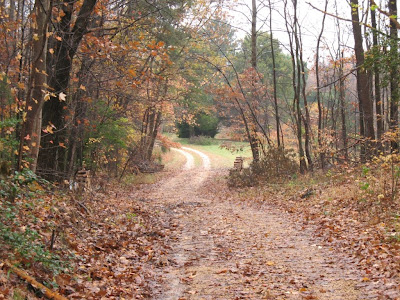 With all the rain we've been getting here in Maryland, our road is muddy in places. 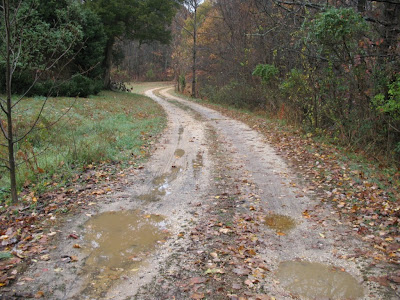 Field beside the road 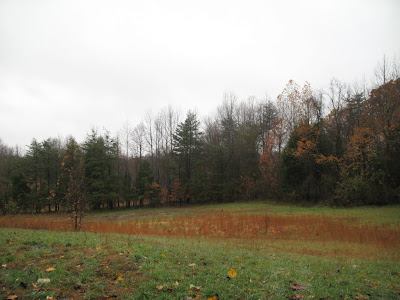 There's always wood to be split.  This pile is from a past tree that fell across the road; we just haven't taken the time to split it & put it in the stacked wood area, so it sits beside the road for now.  The leaves are falling - Autumn is pretty in the woods. 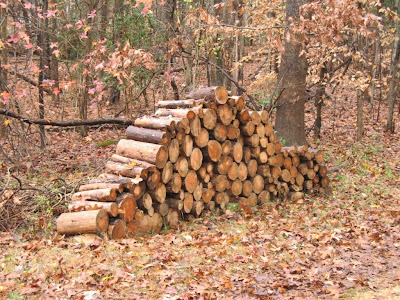 Wild Mountain Holly beside our road. 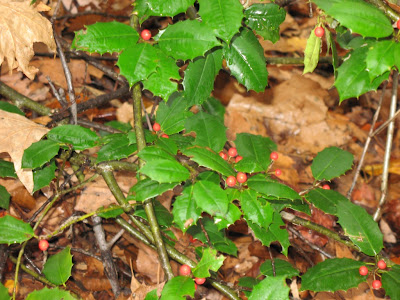 Autumn is here, we've been selling firewood.  Leaves are falling, deer are everywhere on our property.  And the chicks continue to take their fare share of our time every night.  It's been almost 3 weeks since we got the chicks.  We prepare treats (veggies like corn, broccoli, lima beans, squash, lettuce, raw spinach)  for them every night.  Sometimes we even found some earthworms for them - that always goes over very well!  It helps to make them tame when we spend time with them.  I've learned that they like the front of their necks & chests rubbed, now many of them line up to have their necks rubbed.  Even the wildest chicks (such as the little leghorn rooster-to-be) seem to calm down when I rub their necks.  Every now & then a pair of chicks ends up in the chick infirmary inside the house.  Just today 2 chicks were released back into the coop after spending a few days inside.  It seemed one of them was very weak, would barely stand up on her own.  She came into the infirmary & passed out on her side as soon as she & a friend were separated from the flock.  We learned chicks like to be with other chicks, so we try to bring 2 inside together.  The latest pair spent several days being monitored, were well fed and watered, and the one little girl got her energy back up & is spunky again.  I never thought raising chicks would be so complicated, but it's fun. 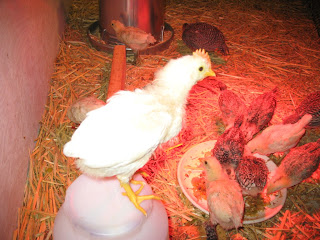 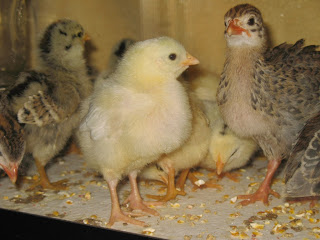 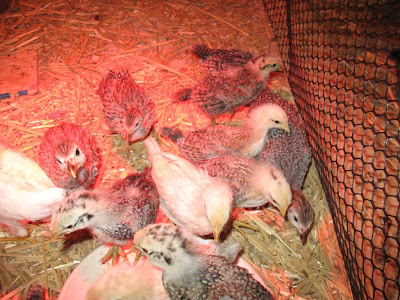