Autumn has hit us here at Razzberry Corner.  It sometimes feels more like winter!
Here are some photos and a video I took last weekend.
This is an old, tired tree at sunset.  To me it has such character. 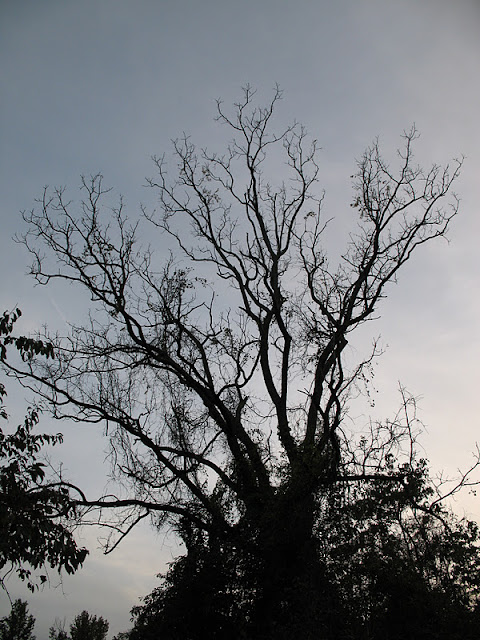 Look for the historic brick column in the photo below.  It lines our drive. 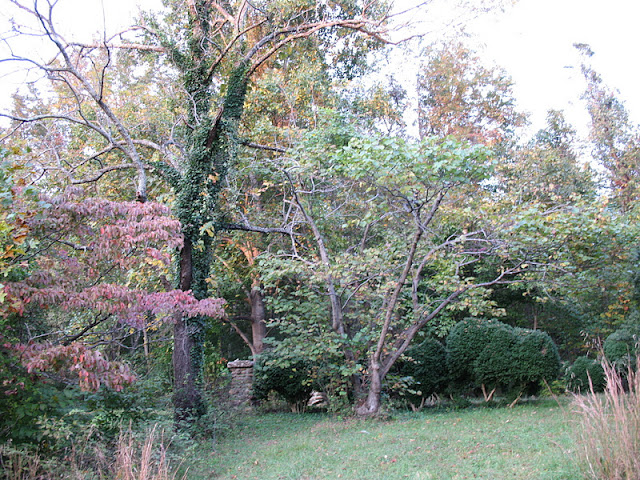 Walking to the front fields, through the trees and bushes... 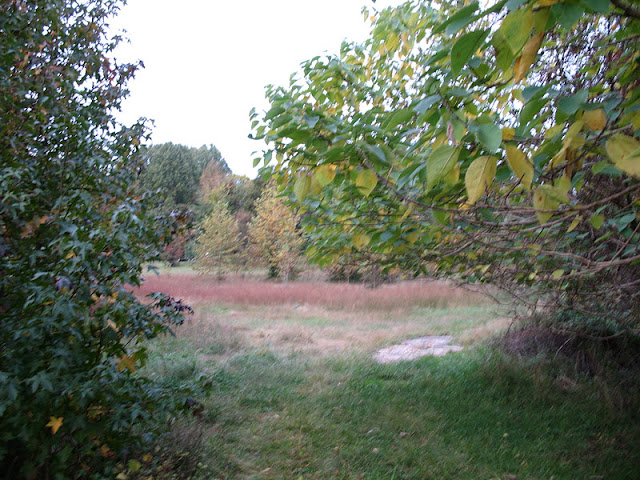 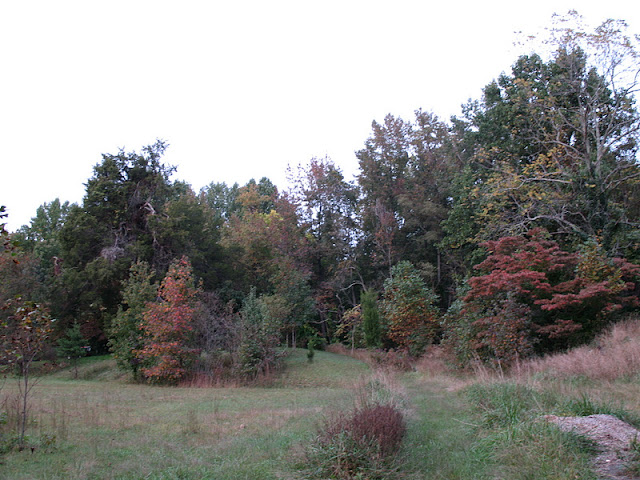 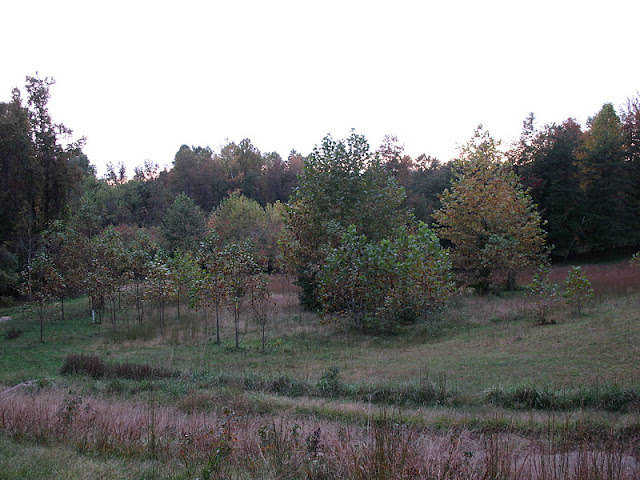 You can hear the guineas welcoming you in the below video!
The video is a panoramic of the front fields.
Have a good evening!
at 7:15 PM 11 comments:

We have 12 guinea fowl.  2 are adult males, born last year.  10 were born this May from eggs we collected and hatched.  And so we enter into autumn with a dozen guinea fowl.  I hope they all survive to next spring.  Last year was a tough year, our guinea flock dwindled down to 2 males.  Luckily in the springtime we collected quite a few eggs from nests we found in the woods before all the females were killed.  Every year I guess we will hatch eggs to keep the flock going strong.
My guineas.  They are so sweet.  And funny.  And noisy.
They come to me to be hand fed, although they keep about 10 feet away at all times.  They chase each other all around the house.  They entertain everyone who sees them.  They eat bugs around the house.  This young flock doesn't wander too far around the property, they stay pretty close.  The previous flock used to wander far and wide.
﻿
Today I found 2 guinea eggs in the woods ~ these are the first eggs I've found from the hens hatched in May.  The guinea eggs are the 2 top ones in the below photo.  The others are chicken eggs.
The news eggs are so small, as they are starter eggs.  Guinea eggs are smaller than chicken eggs, anyway, but these are exceptionally small.  The right egg is dirty - I didn't wipe off the dirt from the nest.  The guinea eggs do have little brown spots on them, but that one has brown mud, too!
Thank you, guinea girls!
at 6:00 AM 8 comments:

Breakfast is an important time here at Razzberry Corner!﻿
Jerry and Bobby, the outside cats, take breakfast seriously!

"Leave us alone!" they say.
Both cats are getting their thick winter coats, as it's getting cold out.  Jerry has been here since we moved into this house.  We still are not able to get too close to Jerry.  We will never be able to pet him.  Bobby, however, is a lovebug and loves to be pet.  Bobby loves attention.  We wondered if Jerry would get more friendly after seeing Bobby receive attention (pets) from us and actually not being killed by us.  Jerry acts like if he gets too close to us we'd kill him!  Jerry just watches from a distance when we pet Bob.
Both cats are well-fed, at least! 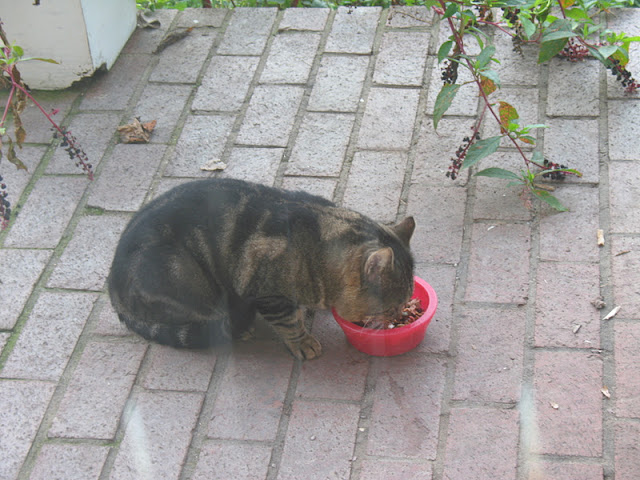 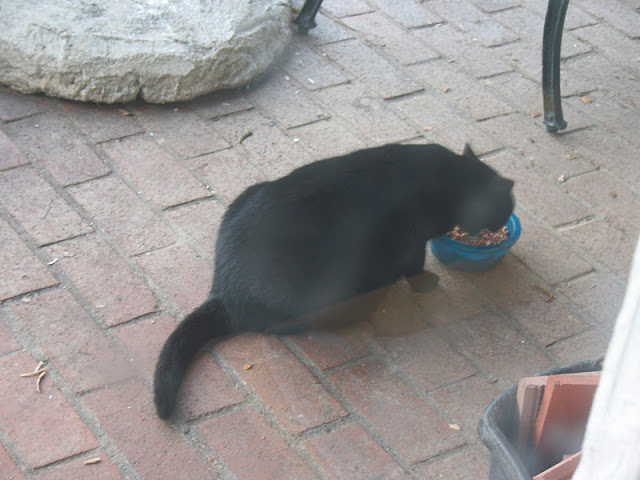 Good morning from Razzberry Corner!﻿
at 6:00 AM 6 comments:

The other day I happened to be hanging around the house, which is rare, and heard a loud "thud".  Prior to the thud I heard a lot of cardinal twitters outside my dining room windows .
Let me say that we have many cardinals around here, and cardinals have multiple nests/families throughout the year.  That morning I noticed the adult cardinals feeding the grown babies suet from our suet feeder.  The grown babies always love to be fed, even though they are adults themselves, and they tweet like little babies.
After the "thud" I found this grown male baby cardinal laying on the windowsill.  Evidently he flew into the window.  Hard.  He was shaking, his eyes wouldn't focus, his toes were curled up into a fist.  I didn't think he was going to make it. 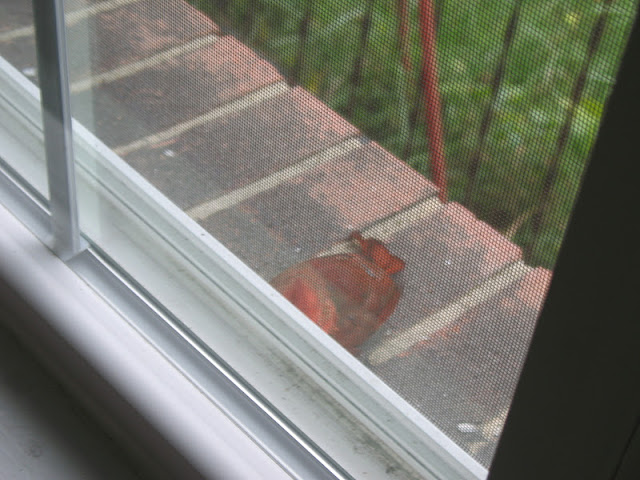 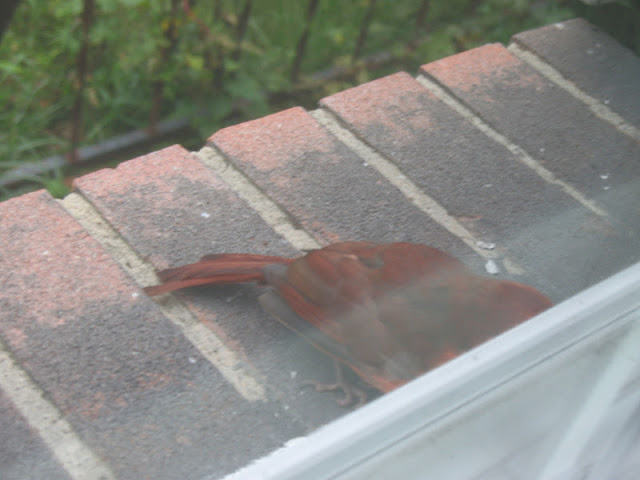 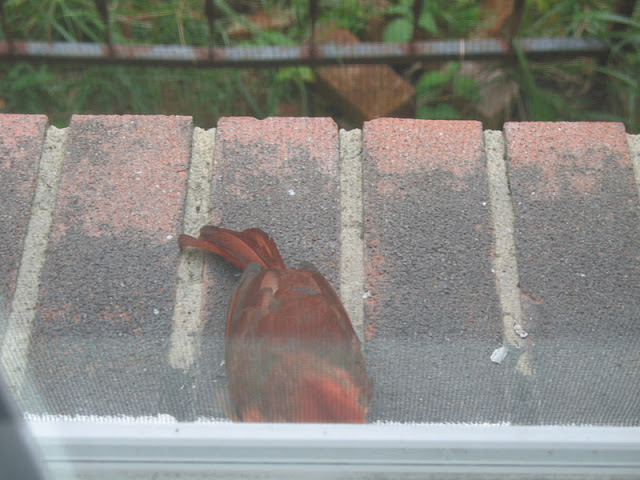 The little cardinal laid out on the window sill for quite a few hours.  I checked on him about every 30 minutes and could see him breathing.  I made sure my inside cats didn't notice him out there so they wouldn't torment him by staring at him through the window.  The outside cats weren't around, either.
When it started to get dark out, I figured the little guy had to be checked out.  He couldn't stay out there all night, the night animals would find him, and he'd be blind in the dark and couldn't attempt to fly to safety.  If he could even fly.
He was still breathing.  I tapped on the window, and to my surprise he was able to focus his eyes on me then!  He was coming around!  He still didn't fly away, but it appeared he was waking up, coming out of his stupor.  He looked all around, confused as to why he was laying on the windowsill.  After a few minutes he still laid there, and the sun was setting fast.  If he could fly, he had to attempt it immediately before it got too dark out.  Darkness comes upon us fast when the sun sets.
And so I started opening the window.  I was going to put him in a little cage or something where he could get some rehab until he was able to fly and go free.  By all means, I certainly didn't want to have a cardinal in the house, but I couldn't let the little guy just lay there and be eaten by an owl overnight.
The little cardinal wanted nothing to do with me!  As I opened the window, he immediately looked around, and with a loud baby cardinal twitter, he flew to the tree where the cardinals live!  He was better!  He didn't fly in a straight line, but he flew well enough to make it.  He left behind a huge poop on the windowsill.
The little cardinal boy lived to see another day!  I bet he had a headache!
at 8:05 AM 8 comments:

I was missing from the Razzberry Corner blog for the month of September dealing with no internet connectivity.  And then finally I got the internet back, only to have to go away on travel for my day job.  And, to make it even more interesting, while I was gone, there was a surprise surge and outage at our house which finally killed our old office computer.  That's the computer I use to blog and which has all my photos.  The computer's motherboard died.  It was an old computer anyway.  I didn't upgrade already because it was still running, although it was old and slow and tired.
And so I was gone another week on travel, and then home a week without a primary computer.
Yeah, I have other computers in the house, but the home office computer is the one that I always use on the blog.  And honestly, as busy as I am these days, I don't mess around on a computer when I get home.  That's what I've realized about having an old farm - there's always so much work to do around the house and property or dealing with the animals, that there's no free time to play on the computer.  Maybe I just don't want to deal with the computer when I get home, I do that enough at work.
I'm not complaining, just stating facts.
And so, this week, I got a new computer!  Yeah!  It's all shiny and fast and has cool features and I'm excited!  I'll have to setup my old hard drive in this machine so I can access my old files.  But right now, the new one is clean and empty and fast.
I'm posting some photos that I took with my cell phone while I was on the trip last week to
Key West,  FL.
I absolutely loved Key West!
It was a warm, tropical, happy place.
I saw this big, old iguana on the side of the road and HAD to get some photos.
I saw lots of smaller iguanas, but this one was huge!  He was approximately 10 feet long with the tail. 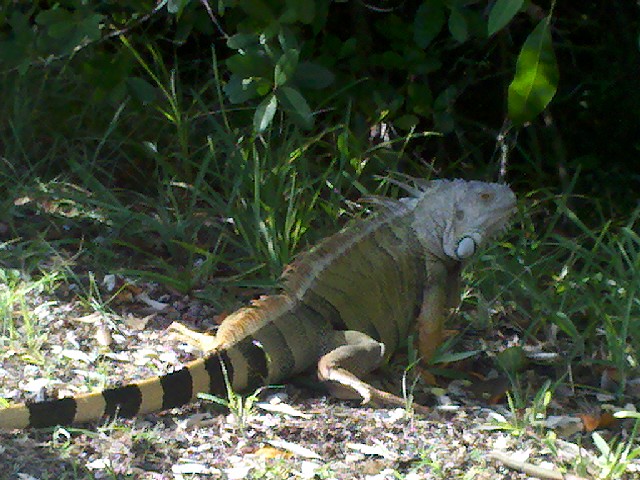 He probably could have chopped off my head with one swing of that tail.  I know their tails are very sharp and can cut you if they swing at you.  He looked like a hundred years old, I was so lucky to see such a big boy. 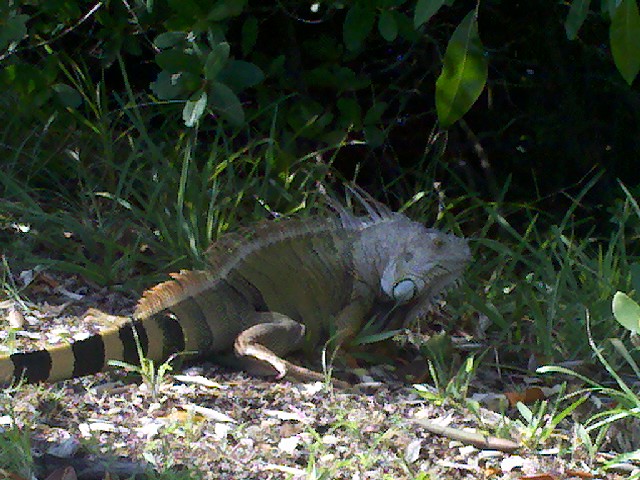 The biggest surprise for me in Key West was the chickens!  There were wild chickens all over the streets of Key West!  The locals said they were protected animals and were not allowed to be killed.  They are called Key West Gypsy Chickens.
It so amazed me to see chickens in the downtown area of Key West.  It made me feel right at home!
Here's a link to a webpage about the chickens:
http://sarah-goodwin-nguyen.suite101.com/key-west-gypsy-chickens-a100879
Once last week in Key West I was in the car in a busy intersection.  A big rooster and a number of pedestrian people were standing by the intersection waiting for the light to change so they could cross the road.  The people were talking, not paying attention, didn't even care a rooster was standing amongst them!  When the walk light came on and the traffic stopped, the rooster started walking big as day right across the crosswalk to cross the road.  The people noticed he was walking and followed along behind him and crossed the road.  I was speechless.  He lifted his legs high and proud and crossed the road.  I didn't get a pic of him because I was too amazed to move. 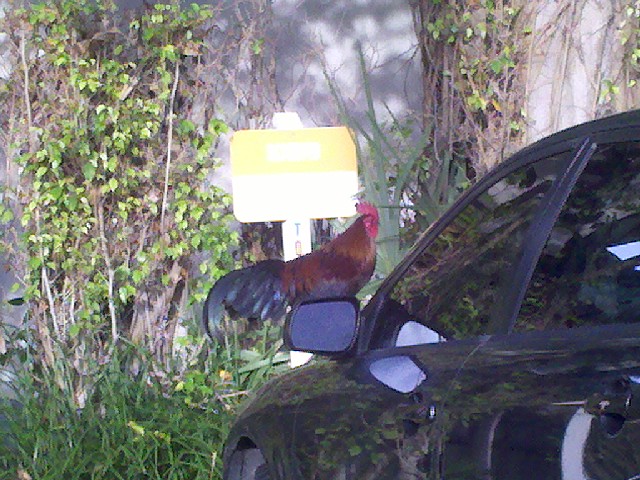 In the evenings the chickens roosted in the palm trees.  I looked around for eggs on the ground, didn't see any.  I was the only person amazing by so many chickens﻿ in a downtown area.  There were different colors of chickens; I seem to have only taken photos of brown roosters because brown was the most common color.  I noticed more roosters than hens; the hens were very small.  I watched the roosters having cockfights on a downtown pier one afternoon.  No one else seemed to notice.  I watched them walk amongst the people; no one else looked twice.  I did not see any chicken/car accidents or any dead chickens on the road, although I did see a human bicyclist get hit by a car and I did see a man laying drunk out by the side of the road.
It was an interesting place! 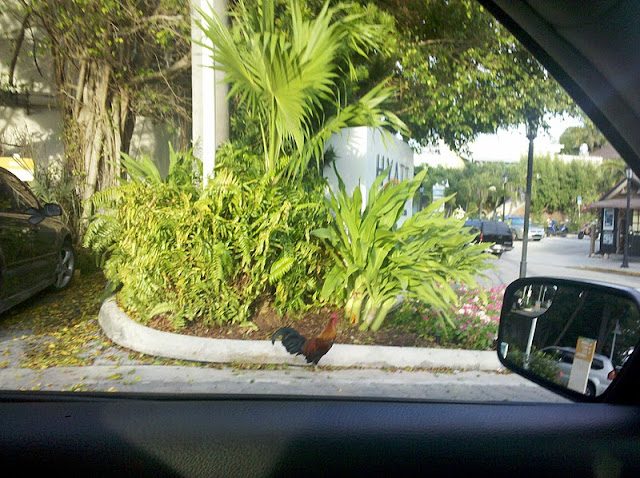 The Key West sunset was gorgeous.  As the weather is getting chilly at home, it was nice to get away to the tropics for a quick break.
Can't you just feel the warmth in the below photo?  (I was in my bathing suit when I took it!) 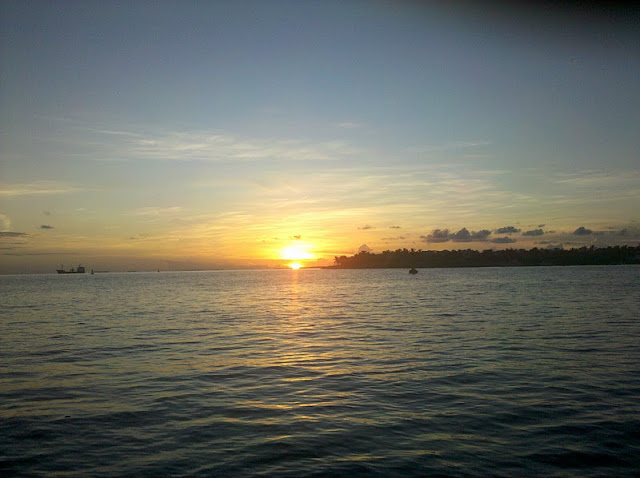 Alas, I am now back at Razzberry Corner.
Hopefully I will start back up the Razzberry Corner blog about all the going's on here at the farm!  Lots is going on!
Stay tuned!
at 10:30 AM 13 comments: