I'm recovering from having the flu the last 2 weeks. It's been a while since I was that sick.

I'm thinking about how I need to go clean the chicken coop, and I'm procrastinating.  It's cozy and warm in the house.  I eat an orange, trying to waste time, not wanting to go out to work.

It's a little foggy outside - we are having unseasonably warm weather.  It's supposed to be in the upper 60's, maybe even 70's today.  I looked out my kitchen window and saw these scenarios.  I have to smile.  The fog makes everything look like a muted painted picture.

At first my attention was directed to a pilated woodpecker.  I went to get the camera and returned to the kitchen window.  I missed the woodpecker, but saw Benjamin the farm cat and the guineas.  They all get along well, the guineas don't mind Benji. 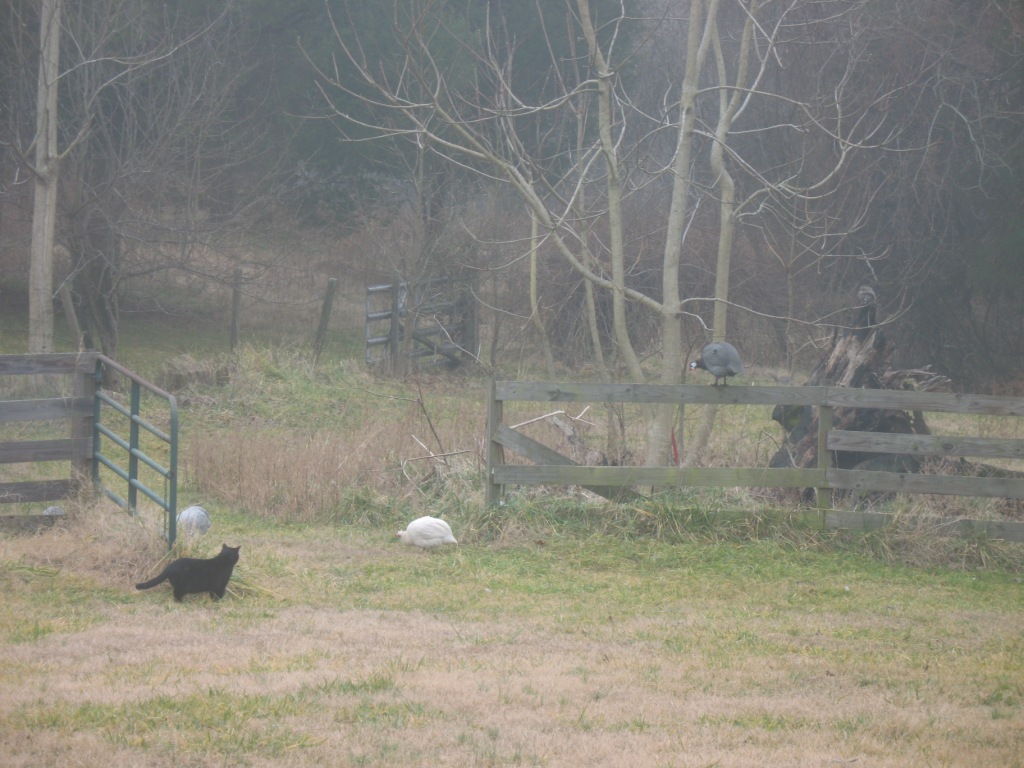 Benji was hunting mice and squirrels when the guineas showed up in the yard.  He went and greeted them, then went off to continue his farm cat duties. 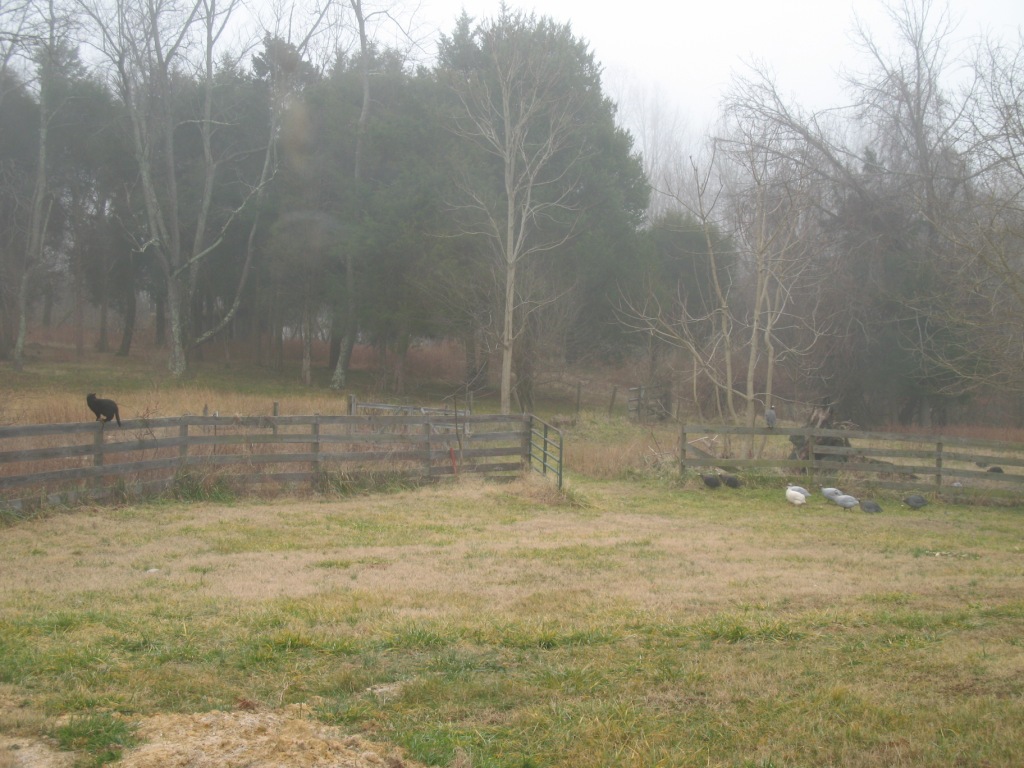 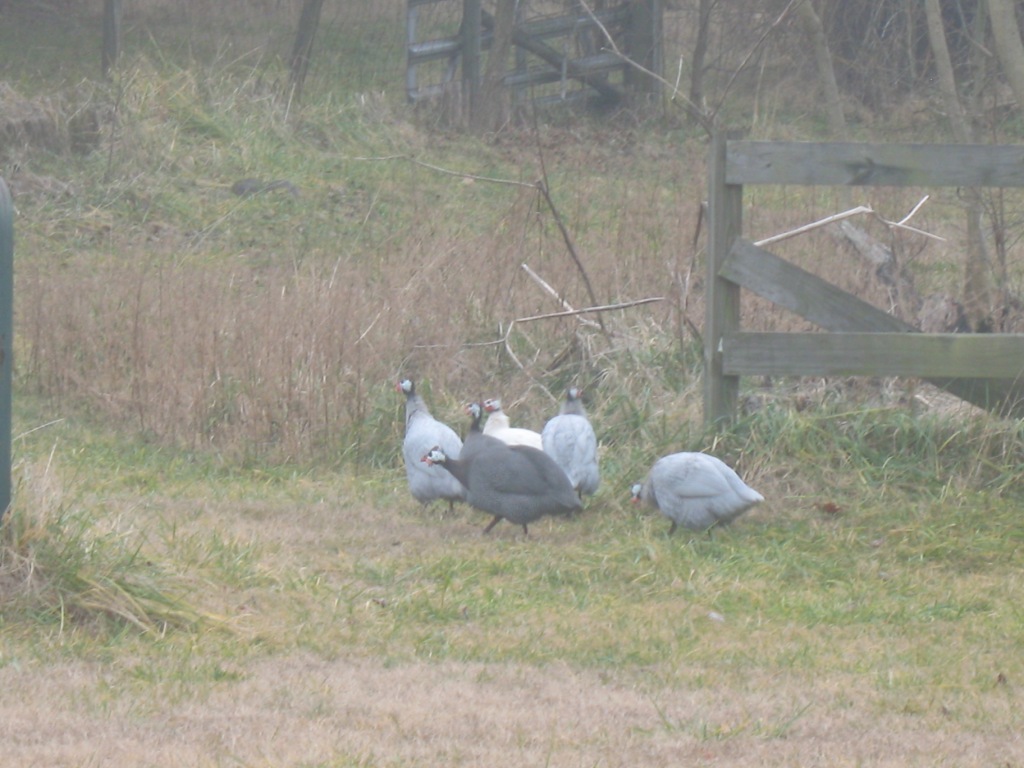 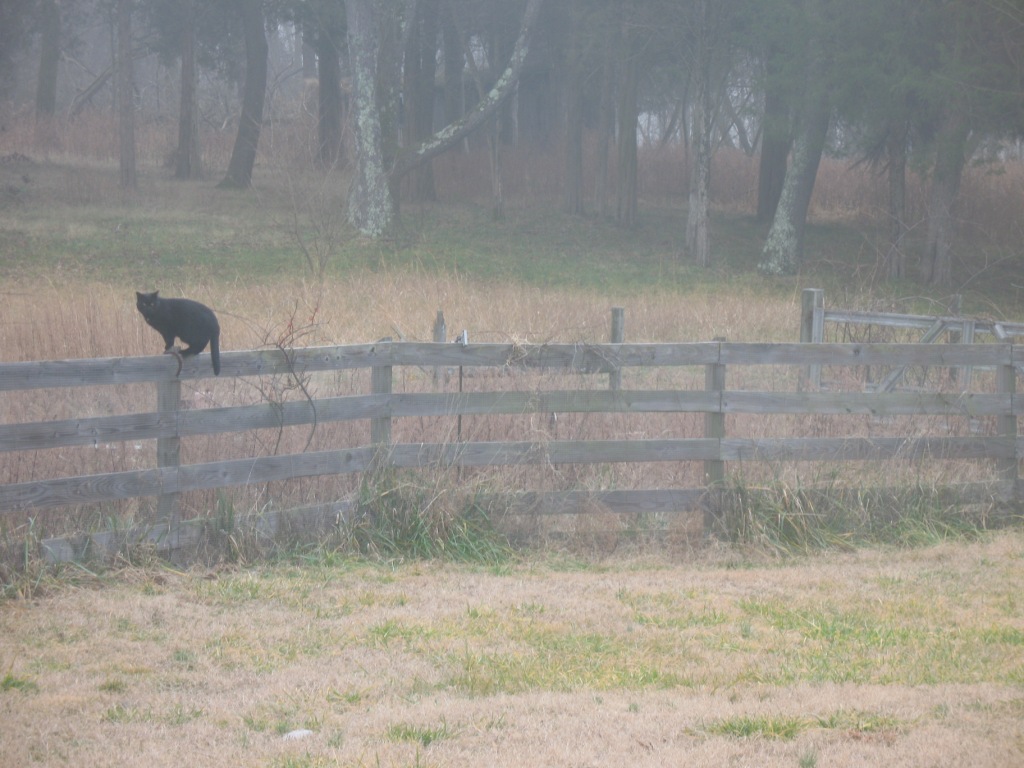 Benji has a very thick coat for winter, as he's an outdoor only cat.  He wouldn't have it any other way. 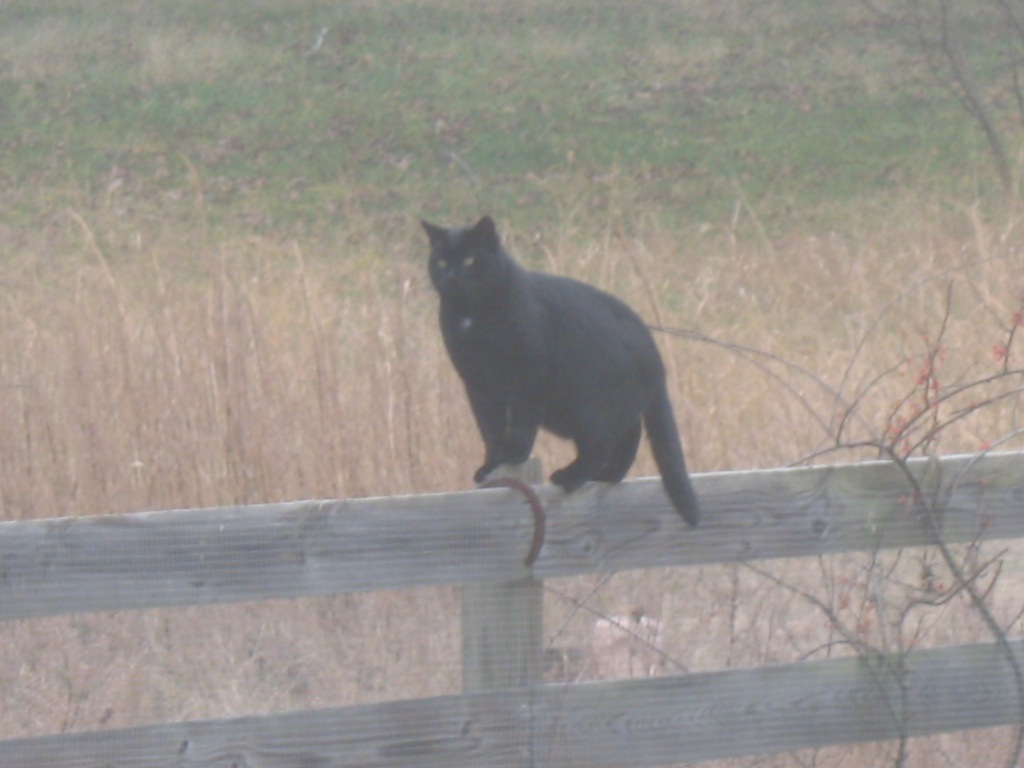 It's going to be a great week.  Hope you take a moment to see how beautiful life is and enjoy it.
Now I'm going to get to work on cleaning that chicken coop...

This blog post has nothing to do with the Razzberry Corner farm, but it just struck my fancy, and so I'm writing it.  I read today about "vocal fry" or "creaky voice" in women.  I thought it was so funny, but interesting.

Listen to this podcast, specifically at 4:30 when the guy tells the girl to "be obnoxious".  Also at 23:25 a clip from a Mae West film is reviewed to hear the creaky voice.

They call it creaky voice in linguistics.  They go on to say that women use different voices to get specific results.  Linguistics is very interesting: different vocal characteristics, or voice qualities, different meanings.  They say creaky voice is specific to American women, specifically to young up and coming professional women.  The men's discussion and reaction in this podcast are quite funny if you listen to it all the way through.

Right now I have a cold, so I have a "breathy voice".    I better watch out, I could be saying things I don't actually mean!

Have you ever found yourself using creaky voice on purpose?  Get your creak on, women!
at 8:36 PM 3 comments:

Update to "Live chicken with a broken neck"


Back on 22Dec12, I posted about how Cinnamon hen suddenly had a broken neck out in the chicken pen.  She was listless and doubled over in the chicken pen, not eating for days, not moving much at all, keeping her distance from all the other birds.  I brought her into the house into seclusion, so no other bird could pick on her when she was hurting or worse, so no rooster could attempt to mount her, which is probably how she got the broken neck in the first place.  The roosters hold the hen's neck with their beak and sometimes can be rough on the hen if the hen struggles and attempts to run.  And Cinnamon is a small bantam hen, the 2 roosters are bigger than her.

Cinnamon stayed in the bathroom, which is warm and dark.  At first she didn't want to eat much.  She wiggled her head and neck around and it had a terrible kink in it.  After 3 days she was eating better, but still doing the terrible looking neck wiggle every now and then.  We moved her from the warm bathroom outside to the infirmary coop under a heat lamp, where another hen was placed with her to keep her company.  We had to make sure the visiting hen was lower in the pecking order than Cinnamon; we didn't want anyone picking on her when she was injured.

After 4 days in the infirmary coop Cinnamon seemed to be much better.  She perked up as soon as she was with another hen.  We rotated in various hens to keep Cinnamon up with the chicken gossip.  You know how hens like to talk and gossip.  Most chickens do like to be around other chickens.  Every now and then you'll find a chicken that doesn't like to spend time with other birds, but that's unique.  Cinnamon started eating much better when she was in the infirmary coop.  She also started roosting in the infirmary coop, not just sitting on the ground.  Those we all signs that she was getting better.

Finally on the fourth night, one week after she was separated from the general flock, she was put back in with the flock to roost at nighttime.  She's been doing fine ever since.  She still has a kink in her neck, but she seems to be pain-free now.  She's been hanging with the other hens, eating normally, roosting at night, no problems.  And so, it seems a chicken can survive getting a broken neck.
at 5:00 AM 8 comments:

I have decided to make a technical section here in Razzberry Corner, named Razzberry Bytes.  I'm into keeping it simple. This is the first official post in Razzberry Bytes.  I'm going to discuss technical issues, things we've all experienced, about computers and tablets, maybe even about our blog hosting programs, etc.  I welcome all feedback.  We all need to know about computer-related issues.  I don't think this will be a big part of Razzberry Corner, but it's just a way to separate out the technical posts.  Let's get started!

I have the Beachbody Insanity workout on DVD, which I love, by the way.  You're supposed to follow one DVD every day.  However, I hate lugging around the DVDs when I travel, and I travel extensively for work.  When my friend in Japan saw my box of DVDs in my suitcase she laughed out loud at me. I also lug around a full size Windows OS laptop while I travel, and play the DVDs in the laptop.  More to follow in a later post on my recent quest to downsize the laptop to a tablet or ultrabook...

And so I decided to transfer the DVDs to the laptop.  I installed WinX Free DVD to MP4 Ripper by Digiarty, which I easily downloaded.  There's a ton of programs out there that will do the same job, the one I used worked fine for me.  The WinX Free DVD to MP4 Ripper read the tracks on the DVD.  I told it where I wanted to place the newly created MP4 files.  It didn't take that long at all and it created beautiful streamlined MP4 movies for me to play on the computer.  There were several options in the program if I wanted to tweak it, or I could leave it on the default settings. No more lugging around DVDs!

Since that was so easy, I got the idea that since I carry around an iPod everywhere I go, I should put the MP4 files there, too.  My iPod is 64GB, it has plenty of space available.  I know the workout, I've done it a lot, I don't need a big screen.  Sometimes it's cumbersome to carry the laptop to the gym if it's just me doing the workout.  So I copied the MP4 files to my iTunes Library on the computer, and they showed up under movies.  Excellent.  Then I tried to drag them from my Library Movies to my iPod below in iTunes, and it said they were not in the right format.  After a couple minutes research I realized in iTunes I had to click on the movie in the Library, click Advanced, then create iPod or iPhone version.  There also was an option to create an iPad or Apple TV version.  Now this conversion takes a while.  I think it takes the same amount of time that it would take to play the video.  Then, in the Library Movies section, I had 2 copies of each movie.  I dragged the newly created iPod formatted one to the iPod.  I could have synced up the iPod, but syncing takes a while and I didn't want to mess with any other files.  To me it's easier just to drag the new files where I want them.

There you have it.  All in all, it was a piece of cake to make MP4 files from the DVDs.  Those MP4s played perfectly on the computer.  It was slower but still not complicated to get those MP4s onto my iPod.  In iTunes I made sure to name the video files how I wanted them named.  It renamed them all to "insanity" and I renamed each file to be the specific workout name.