Last Saturday night a fox attacked our guineas and mangled a female.  She survived, somehow, by the Grace of God.  I call her Broken Guinea.  She still is missing much of her feathers, but her wounds have healed and she is able to walk and fly now.  She had a rough few days in the beginning of this week.

Yesterday afternoon I looked out on my back porch and saw the most horrible creature eating cat food.  I have to assume it was a fox, but it certainly didn't look like any fox I've ever seen.  It was all bones and skin.  I have never seen an animal so thin, even on those infomercials on TV asking you to save the animals.  It looked more like something you'd see on a horror movie on TV.  It's jaws were tight, it's lips barely covered it's long fangs.  As it ate the cat food it closed it's bulbous black eyes, appearing to really enjoy the dry kibbles.  It's tail was just a thin stick.  It was missing much of it's fur, but what fur it did have was the color of a red fox.  It looked like I have always imagined the creature called the "Jersey Devil" to look.  It looked like a small demon.  It sent a chill down my spine, and sadly, my heart went out to this creature.  I cannot imagine how any animal could be that hungry, starving even.  Aren't there things for fox to eat out in the woods?  Mice, rabbits, grass, moles, whatever?  Things other than my guineas?  Are there that many fox in my woods that some of them are starving to death?  It was a horrible, sad, sight.  Is it wrong for me to take pity on the monsters killing my poor guineas?  I called Randy over, and he, too, saw the pitiful monster.  He said fox pull out their fur to make dens for babies.  She was gone into the woods before Randy got outside.  I wish I could have gotten a photo of her.

Last night I awoke at 12AM to hear a guinea screaming her death scream.  I'm getting to know that horrible scream well.  Randy and I flew outside and eventually found one of our female guineas flopping around in the backyard.  Her head was all mangled.  She died a few minutes later.  We picked up her body and put it on the front porch where the fox wouldn't get her.

We looked all around the house for the fox.  We went up in the front yard where the guineas roost and attempted to count how many where in the roosting tree.  It appeared one female and one male were missing.  Something must have chased three of the guineas out of the tree, and onto the ground, where the fox hunt.  And then we heard more guinea screaming from the backyard!

We ran around back to find the fox with "Broken Guinea" in his mouth.  Broken Girl was putting up a huge fight, the brave bird.  This fox was not the Jersey Devil fox that I saw earlier, it was a normal fox.  Somehow, the amazing Broken Guinea Girl, managed to get out of the fox's mouth and flew straight to Randy, knowing that he would protect her.  Randy didn't have a good shot, as he had the guinea in his face, by the time he got around the bird the fox had escaped into the woods.  We collected Broken Guinea, who was terrified to be caught, and locked her up for the night in the infirmary coop.  She was hysterical, which is understandable.  She literally flew out of the jaws of death a second time.

We hunted far and wide, the fox was gone for the night.  Why did he leave the first guinea still partially alive in the backyard?  Maybe just hearing us coming out the door scared him enough to drop her?  We don't know.  In the morning all the guineas were accounted for, minus the dead female.  We let Broken Girl out, as she was hysterical to be cooped up, and the male guineas outside were hysterical listening to her screams in the coop.  Now we have only 6 guineas:  2 females: Broken Girl and her sister, 3 light-gray colored males, and one white male.  Our flock keeps getting smaller and smaller. 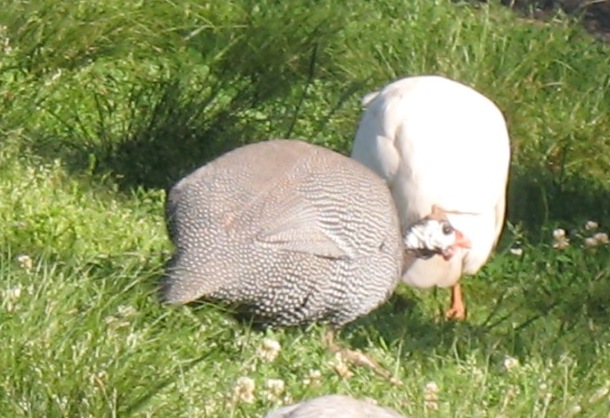 This is so sad, and there is really nothing you can do. Heaven help any guinea girl that tries to sit a nest around your place.

gosh, it is war right now around your place. When I was a kid, and we had guineas the same thing happened. One by one something got each one. What ever it was even got our peacocks. I would have felt sorry for the fox too. It sounds like she might have lots of babies. I know the mother fox that used to live here had six, I did want to catch one and tame it so bad. I knew where the burrow was and I would stand on it just to hear the little puppy barks.
I do hope you get the killer fox.
I hope you get to rest today, I am glad that other guinea cheated death a second time.

Chai Chai - But she wasn't sitting, that's what's upsetting. This time thr guineas were roosting in the tree and somehow fell/flew out of the tree at night. We check the nest to ensure no one sits overnight. We made that mistake once!

The strange animal may be a fox with mange or hyperthyroidism. Animals with hyperthyroidism can't eat enough to keep weight on and often have hairloss.

Sorry to hear about your fox troubles. Thankfully we haven't had too much trouble with the foxes/coyotes/bobcats this year. But things like that can change in an instant.

Oh my heavens! You and your poor guineas are going through hell! I just found out that here in California we can call on the Department of Forestry and they will come and trap and remove animals that are causing havoc on your property if you are raising animals such as chickens or goats or sheep, etc. My daughter has lost a few of her chickens to what she thinks may be foxes so she's going to be giving them a call. I wonder if there is such a service in your area?

you have nothing to be guilty about... you have just done your best
the hardy guineas will survive like my four did... not as many as you would like but if they can be caught at night, they perhaps are the more stupid or weaker birds.... the majority will survive x

This really sucks. Hugs to you and I'm sorry for guinea girl. :(

Such excitement! The kind you don't need! Glad Randy was there! That skinny fox sounded dreadful! I alwayscwondered what the Jersey devil looked like!