Saturday night we slept with the windows open, as we usually do since the weather is so nice right now.  At exactly 3am we heard a bird screaming bloody murder.

I asked, "What in the world...?"
Randy replied hurriedly "A female guinea was sitting on the guinea nest!"

I knew what was going on.  There's a guinea nest out in the back yard where the female guineas have been laying their eggs.  Friday night one of them decided to sit overnight on the eggs.  Randy chased her off the nest and she roosted in the tree, unhappily, with the other guineas.  Saturday night he let her sit on her nest.  The nest only has a few eggs, every day we remove the newly laid eggs.  Normally a guinea hen will wait till there's about 40 eggs to start sitting.  But I guess one of the guinea girls wanted to be a mother, even if it's just to a couple babies.  Randy thought that since the nest and eggs had not been disturbed by wild animals in the past month, that maybe it was safe.  Maybe the night creatures didn't know about it, or for sure they would have eaten the eggs by now.

Well, a fox found the nest and the guinea hen.  Guineas are totally blind at night in the dark.  The guinea was easy dinner.

Randy looked out of an upstairs window and saw the fox trotting off across the backyard, guinea in mouth.  The fox stopped and readjusted his bite on the poor bird, then went through the fence and into the woods, bird in mouth.

Randy quickly ran outside and fired off a couple shots in the night air.  More than a couple.  Luckily we don't have neighbors, as we are out in the woods by ourselves.  Well, we live with the animals, obviously, in their territory.  Anyway, the fox was already into the deep woods, gone from sight.

We quickly ran to the wooded area on the other side of the fence where the fox headed.  We attempted to look for feathers hoping to follow a trail.  We only found 3 feathers, no trail.  It was so very dark.  The woods are so very thick, brush is abundant.  The forest is not just dense trees, it's trees and bushes and grapevines and rosebushes and grass that's waist-high.  I can imagine the ticks.  Spiders had made webs throughout the woods and got on my face and all over me.  The grass and brush was damp with heavy dew.  I quickly was soaked.

We searched and searched, up close where the bird was last sighted, way deep into the woods.  I attempted to go to every woodchuck hole I could remember in that section of the woods, thinking maybe the fox was now living down there.  No signs of the fox anywhere.  No guinea anywhere.  Way far away I heard dogs barking, yapping.  Maybe they were foxes?  Fox pups getting dinner?  We ran and hunted for an hour through the thick woods, scanning everything with bright spotlights.  The dogs I could hear were so very far away, at least another mile away.  It could have been a neighbor's house, his farm dogs were awoken by our noise miles away.  Dogs are keen, aware of their surroundings, even miles away.  I can't imagine a fox would travel that far for dinner.  But maybe, who knows?

We woke a flock of wild turkeys.  They gobbled unhappily.  They, too, roost in trees.  A songbird started a solitary song in the thick darkness, awoken by our search.   I wish the bird would be still, so maybe I could hear if the guinea was quietly crying somewhere.  I heard crunching in the leaves in the woods, but discovered it was one of the stray cats, TommyCat, following us through the woods.  TommyCat followed us everywhere, watching from a distance.

The woods are so very thick with underbrush and leaves.  It was so easy to misjudge our location in the dark.  If I didn't know the woods so well it would have been easy to get lost, turned around.  It was SOOO dark.

Finally, at 4AM, we quit the search for the guinea, and Randy, TommyCat, and I turned back for the house.  TommyCat got an early breakfast for his work.  He's new here, but TommyCat fits in well already.

And then, at 7AM, who shows up but the guinea hen!  She is missing a patch of feathers and skin on her back, which is raw and bloodied, she's all wet still, and she's seriously hurting.  She can hardly walk.  But she is hanging in the front yard with the other guineas.  Every time we attempt to get close to her she painfully walks away.  She did eat some bread that we tossed to her, which is a good sign.  She's standing off by herself, but some of the other guineas are attempting to stay close to her.

I can't believe she lived!  Somehow the fox must have dropped her.  Maybe he was frightened by the gunshots and ran for his life, leaving his dinner behind.  I can't believe we didn't find the bird in our search.  I assume our loud and obnoxious presence in that section of woods for an hour kept the fox from coming back and finding the guinea hen, who must have been hidden somewhere in the dense brush.

I don't know if the injured guinea hen is able to fly, if she'll be able to roost with the other guineas tonight.  If not, I'll go catch her after dark and lock her up in the infirmary coop.  I wish I could catch her before, but I know that's not possible, and I don't want to hurt her by making her run from me.  If I catch her I'll treat her wounds and assess her for broken bones and give her aspirin water for pain. Poor bird.  I hope she lives.  She's probably in shock now. 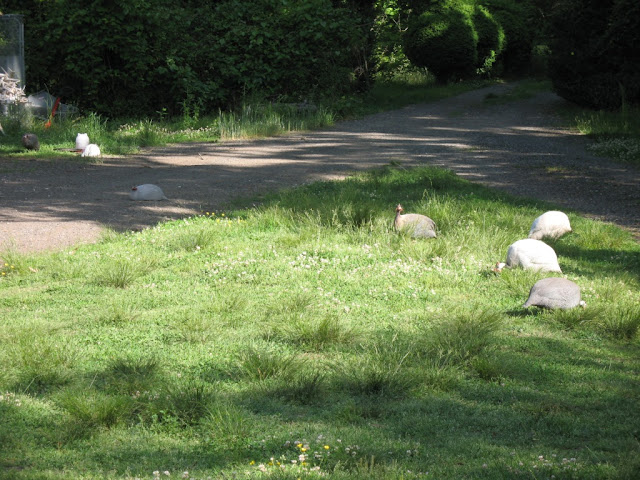 This last picture shows the injured guinea girl in the upper left.  She's a pearl gray color - darker with spots. To the right of her is the guinea waterer, then there's the white guinea boy to the right of the waterer.  The white boy has been near her all morning.  To the right more, in the middle of the driveway, is a lavender male guinea.  He's stayed nearby the injured female, too, but further away than the white boy.  I think the lavender male was her mate.  I think the white male may just want to take advantage of her.  Hopefully the lavender boy keeps the white boy from making any moves on his wife while she's in this condition.  And then there's some of the other guineas in the grass.

I bet that's the last time this guinea hen thinks about wanting babies.
I'll keep you informed if she survives.  She's lucky to be alive.
at 5:00 AM

Not another fox!!! I feel you because of course we've got a fox hanging around our duck/chicken run too. But my Mama duck survived her fox attack, so here's hoping your guinea girl survives hers! I'm amazed she got away. Sending good thoughts for her.

I am so glad she made it out alive. I just hate foxes, I know they have a purpose but they are just so destructive.
It is a war every day when you have fowl, to keep them alive and away from predictors. It is something that movie Fox and the Hound tried to ignore and the bad guy was us. :)
Foxes will always be foxes. I do hope she lives.

Wow, what an exciting story! Hopefully that fox got the hint that it's not a good idea to have supper at your house. Hope she does ok!

Poor guineas! The wilderness is a harsh place. At this rate, you might wind up just buying a whole new batch of guineas.

A miracle escape! Catching the guinea girl to put her in intensive care is going to take a minor miracle as well. I sure hope she makes it!

I can't believe she made it. That was lucky.

ah what an awful but very well written story! i pray your little girl heals perfectly. have you thought about getting a great pyr? my friend has two and several guineas and many chickens and ducks and has had great luck with no losses. i read from another blogger last year the same thing happened to her chicken. good luck!

I held my breath while reading this post. I have been through this same scenerio on three different occasions. Gladys, Iris and Henny Penny, three of my hens all got carried away by a fox, however, I am happy to report all three survived their attack. I hope the same outcome happens for your guinea, sending well wishes from Maine, Julie.