Visitor In the Chicken Pen

The other day Randy went out after dark (it gets dark here so early these days!) to check on Danni, the hen with the broken leg, who's in her own coop.  It was cold so he decided to put up a board blocking her viewing window outside to the chicken pen, to keep the cold wind out of the infirmary coop.  There's a heat lamp in the coop, but when the wind blows it still gets very cold in there.


And so he went out into the very secure chicken pen to put a board up across the outside of the window into Danni's coop.  Now, remember how secure and safe this huge chicken pen is - it was built years ago and is impervious to all outside intruders.  It has a wire roof, it has concrete and also rebar buried down even deeper underground around the fenceline so nothing can dig under.  No way no how.  And it's huge.  We can walk around in there.  The chickens can fly in there.  There's hills and trees inside the chicken pen. 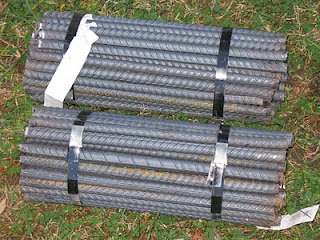 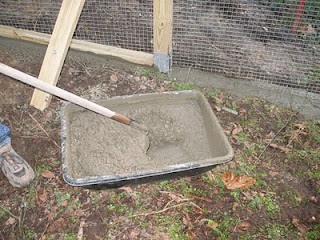 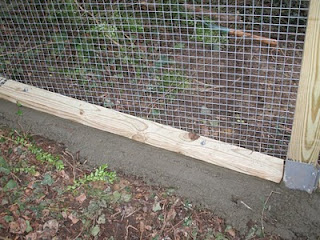 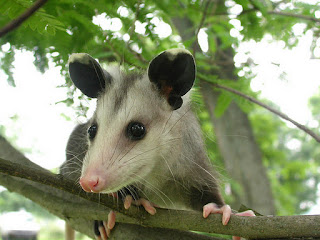 And as he walks by the chicken feeder in the pen, he notices something odd.  He walks on by, there's no way THAT could be inside the chicken pen.  Then he stops, turns around and goes back to the feeder.  There, eating from the feeder, is our resident teenage farm opossum.

We have acquired this young farm opossum.  He was raised in his mama's pouch and then on his mama's back last summer.  Mama used to eat from the outside cat bowls.  And now the baby is always eating from Bobby cat's food bowls.  Bobby and him are BFFs.  We chase him away every night from the food bowls.  Chase meaning, we walk up and tap him on the back with our foot, and he ambles away.  I don't like opossums, I think they're mean and ugly animals, but this one is sorta cute, if a opossum can be cute.  I haven't seen his mama in a very long time.  The photo here is not of our opossum, I found it online.  But it's cute like our Little Opossum.

Randy picked the varmint in the chicken pen up by his tail and carried him way deep into the woods before tossing him down.  I was surprised Randy didn't "take care of him", but we usually don't kill animals that pose no threat to the farm.  This opossum had a choice to enter into the coop where all the chickens were sleeping in the dark and have chicken dinner, or eat the chicken food outside.  He chose the grain.

Now, how did that guy get into the chicken pen???  There's no holes in or under the fence.  All we can figure is that he squeezed through a very small area around the gate, because he's a very small opossum.  He would have had to work at the squeeze part.  But if he can squeeze in, then skunks, small fox, weasels, little owls, young raccoons, who knows what else can all be partying in the chicken pen.  And in the 3 years that we've had chickens nothing else ever was found in the chicken pen.   If Little Opossum went into the pen during daylight, I think Muffin, the lead rooster, would win the inevitable varmint-rooster battle.  Muffin can kick some butt if he wants.  I know from being on the losing end of that battle.  We always leave the chicken door open so the chickens can put themselves to bed in the eve in their coop and they can go outside in the pen at will in the morning.  If any critters make their way into the pen, they can walk right into the coop when all the chickens are sleeping and are easy targets.


So, the last few nights, we've been closing the little chicken door and opening it in the mornings.  Little Opossum was caught eating Bobby's food again last night, but he hasn't been seen in the chicken pen again.  However, this little guy will have to be relocated soon.  We just don't have time to open and close the chicken door every eve/morning.  If he got in there once, I can't trust that he won't do his magic act again, and maybe that night he will not be full of Bobby food already and will decide on chicken dinner. Sorry, Little O, you will be losing your farm privileges.  You're lucky to not have lost your life.
at 8:44 AM

Oh wow, you really don't want varmints visiting a sick chicken. The opossum kind of look creepy, don't they? Like a big rat.

I'm an animal lover. I had pet squirrel when we lived in the 'burbs. Thought raccoons & possums were cute. All that. Until we moved to the country and everything started eating our chickens. Yes, we free range, and understand that's the trade-off, but when we started finding the opossums INSIDE the coop, they were goners. If they couldn't satisfy themselves with the abundant chicken feed outside of the pen, then they were not welcome here.

Is is possible that the possum has been around so much that Muffin doesn't consider him a threat?
That could be the explanation for the varmint sneaking into the chicken area before the gate was closed?

Hope you have a quiet weekend. ♥

The possum visit could have been a disaster, hopefully it learned its lesson and won't be back.

Kessie - No one could get into Danni's private coop. She has a window with wire across it. But if a opossum is in the chicken pen, he could have walked right into the primary chicken coop. I agree with you that opossums look like big rats. They are nasty animals.

CR - I agree, they are not welcome critters. We'll have to get this little guy outta here asap! I was just so shocked to hear about him in the chicken pen that we thought was so safe. We tried to free range, but lost a chicken a day to foxes. We wouldn't have any chickens left! That's why we made the huge fenced chicken pen.

LindaG - No, Muffin wouldn't allow any animal around. Muffin hates the cat Bobby, and Bobby is always around outside the fence. If Muffin sees a bird fly too close outside the pen he's warning the flock. There's no way he'd get accustomed to the opossum. Plus, I only see the opossum at nighttime after the chickens are sleeping. I think the opossum squeezed in thru the fence around the gate into the chicken pen after dark. He's such a small opossum, but it still would have been a tight squeeze.

Chai Chai - I don't think he learned his lesson. He's already been back eating the cat food since he was caught in the chicken pen. If he has no cat food he'll probably go back into the chicken pen for the chicken food. One day he'll realize the chickens are easy pickings in the dark coop, and once he gets the taste of chicken, he'll always return. He needs to go.

I know we have them but I have never seen them around my chickens. I know they do love my ripe tomatoes in the summer. I still don't like them. When my grandmother was alive she would put out cat food for them.
I really like the cement footing around your coop. It is just amazing that guy got in your coop. I know though they can get through the smallest places. Now that it is cold, it is harder to keep those varmints out. We have the foxes around now.

Now that he has found the men, he's going to find the chickens... you need to relocate him now!

I never realized we had opossum here in Maine until one night I noticed something hanging by it's tail on a Rhododendron bush. The next thing I noticed was it's teeth! I agree the opossum needs to move on and find a new home, poor Danni has been through enough! Greetings from Maine, Julie.

That's not good a good visitor to have in the coop. :)