Yesterday Danni the Hen was put to death.  She had previously broken her leg, but it appeared to be healing well.  Then yesterday when I came home and ran into the infirmary coop to check on her, I found her sprauled oddly on the floor, cold to he touch, even though she was under a heat light, and moaning terribly in pain.  She must have fallen on the leg and re-broken it.  I think she was in shock. It was time.

I had been working with the chicken, bringing her in the house, feeding her treats every day.  She'd have other friendly hens visit her inside her coop - Jade spent a lot of time with her.  (But she had no visitors when she somehow re-hurt herself yesterday).  She was able to get around by hopping.  She wasn't in any obvious pain.  She enjoyed tasting various foods.  She taught me that chickens have a sense of taste.  She'd taste every new food by licking it with her tounge, if she liked it she'd eat, if not, there was no way I could get it into her beak.  She liked cooked spinach, surprisingly enough.  She liked her grains - bread, cereal, oatmeal.  She liked green beans and of course corn and brocolli.  She didn't like tomatoes.  She was moody - in certain moods her tastes varied.  When she was happy she'd sing little soft songs.  She wasn't a loud bird, she was a very gentle, quiet bird. 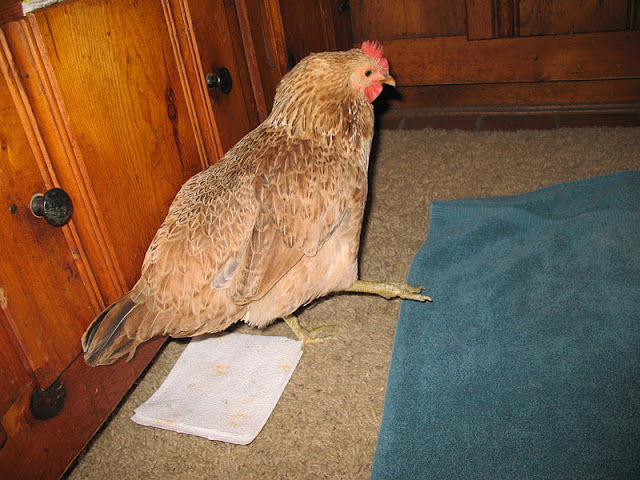 Danni loved to be rubbed under her wattle and she really loved a good back-of-the-neck massage.  The stepstool was put beside her to help her balance.  She learned to lean on the stepstool.  The napkin is under her butt because she never pooped when she was sitting beside her stool eating or hanging with me.  She's always jump up and run off to go poop.  I quickly learned to put a napkin under her butt. 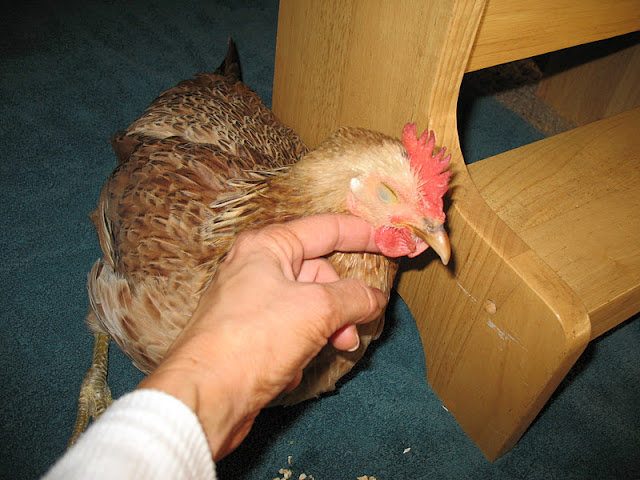 Danni had a hard life, with her broken toe, broken neck, then broken leg.  She must have had weak bones.  I think we may have a daughter of Danni's - we hatched our own eggs last year.  Jade, Genny, Nutty or Cinnamon could be daughters of Danni.  But none of them are as sweet as Danni.  None of them have her exact personality.  None of them ever broke any bones, either.  Poor Danni Hen. 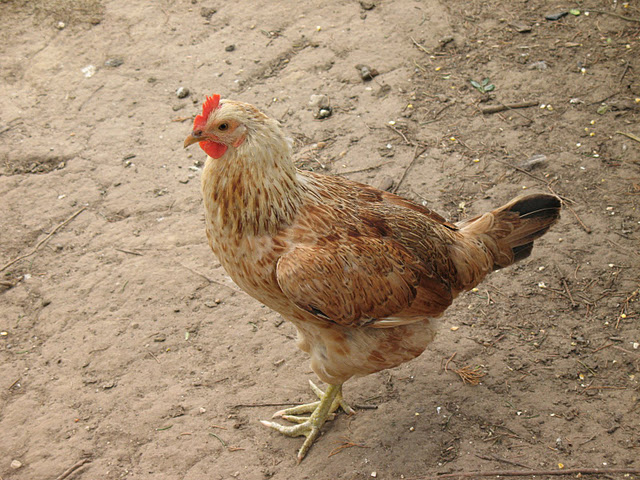 I'm so very sorry that Danni has not made it. You gave her a wonderful, special time in her last months. She was beautiful and just a lovely lady. xoxoxo

I'm so sorry, Lynn. You did an extraordinary job trying to nurse her back to help, and I'm sure she felt like the most loved hen in the universe. And she was a beautiful little chicken. Big hugs to you! I was very sad to read when I saw the title of this post in my sidebar. You guys are the best chicken-parents on earth.

She had a great life, pampered until the very end. I know it's a sad time for you, but keep on going gal.

You couldn't have taken any better care of sweet Danni and I know she knew she was loved! We do become so attached to our girls, don't we? May you rest in peace, sweet Danni Hen!

you tried your hardest
well done

I am so sorry to read this news, know that you did your very best to save her, she is now at peace. Sending blessings.

So sorry you had to put Danni down. I know how you love your chicks!

Oh my! I'm so sorry. You gave her a good life. My sympathies go out to you.

:-( Oh no, I'm so sad!
You have been so wonderful, Lynn, in your love and care for your Danni-hen. That poor, sweet girl.
I love the picture of you rubbing her under her wattle with her eyes shut, clearly loving every second of it.
Gosh, these critters get under our skin, don't they? It's so hard when we can't make them well. :-(
((hug))

Sorry. I know you loved her and did all that you could. It is a hard to decide when to give up and let them cross the bridge. Sorry you had to make that decision.

Nat - I try. You know I love my silly little chickens. I know you love all your critters, too!

Carolyn Renee - She was a pampered chicken, that's for sure! I remember when she broke her toe I used to turn on XM radio for her because she sang along with it!

CAGrammy - I get attached to all animals. That's my problem.

LindaG - Thanks! Hugs back!

Country Girl - Such is life on the farm, right?

Danni - Thanks so much for all your guidance. I really tried to save this little bird. She did love those wattle and neck rubs. I liked that picture, too, because she was happy for a moment.

Matt - When I found her cold and stiff and screaming in pain, there was no hesitation. I even attempted to give her aspirin water for her pain before she was put down. Poor bird. Nothing should suffer.

So sorry, Lynn. Danni was a well-loved hen and no doubt she knew it. You did everything you could, and above and beyond what many folks would have done for her. She was a very pretty bird.

I'm sorry Danni had to leave. It's not easy to lose any of them, but certain hens are just a little more special.