Our guinea flock has been feeling their oats lately.  We used to have 4 Rhode Island Red roosters, which are large birds.  We had to separate them from the chickens due to too many mating injuries with the bantam hens, and the only caged area when the boys could range didn't have a full roof or ceiling.  The roosters couldn't fly out, but the free-ranging guineas could fly in.  And those guineas didn't like those roosters one tiny bit.

Every day the guineas would be in the rooster pen fighting.  The guineas always won, despite the fact that the roosters were larger.  Even the guinea HENS would fight the roosters and win!  Once I found all 4 roosters in the corner of the pen, tails up, heads down, huddled down hiding their faces, while the guineas attacked them and ripped out their tail feathers!  I didn't know guineas were so mean.  They seem to be territorial - if there's anyone new in the area, they want to chase him away.  The guineas rule this farmyard!

Yesterday I heard alot of mad guinea screaming in the back yard and found the flock attacking a small buck.  The buck didn't like the guineas one bit.  He took off running while I tried to take photos of the guinea vs deer action.  The guineas won the fight, the deer took off and the birds actually chased him away!  I didn't get many good shots, but got a few that weren't too clear. 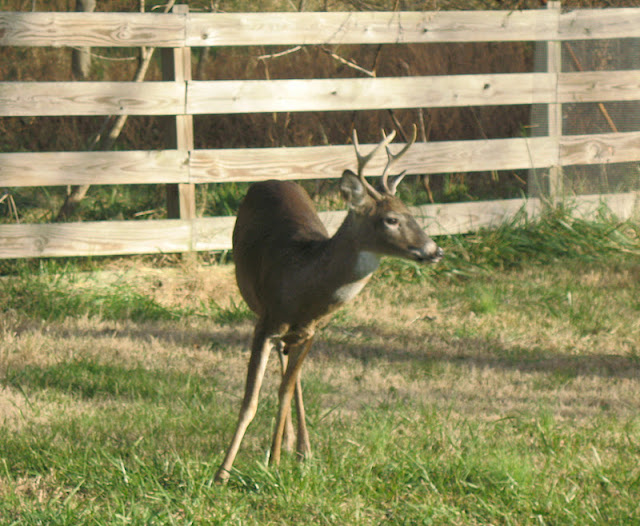 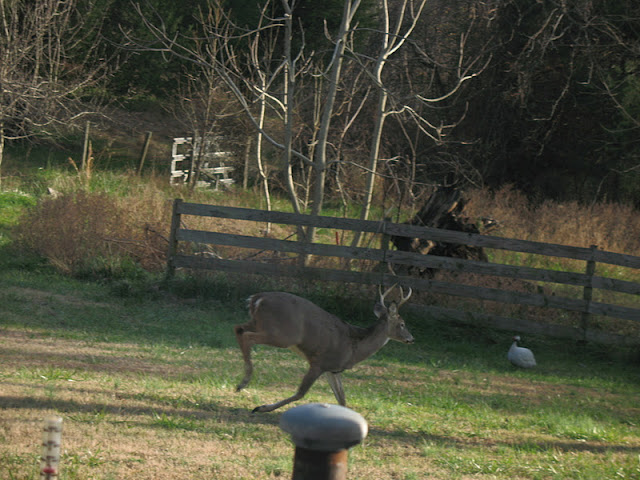 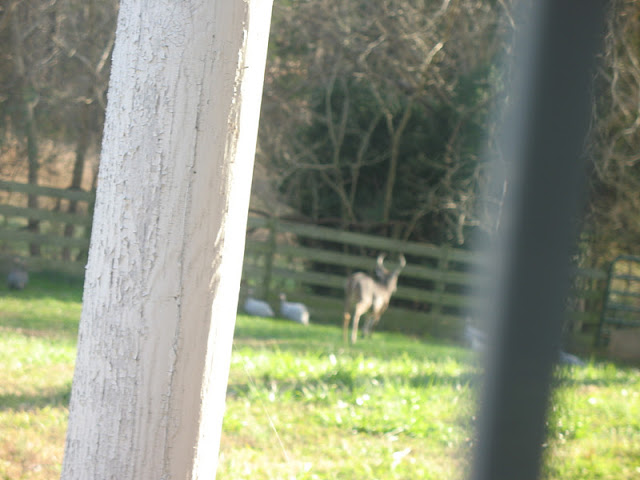 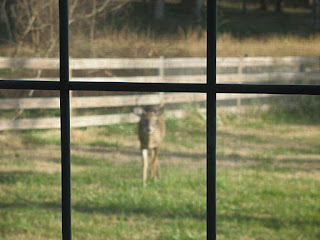 Earlier yesterday I watched the guineas chase a woodchuck out of the backyard.
Woodchucks should be sleeping underground anyway, it's cold out there!
Let the games begin...
Guineas 3
Everyone Else 0 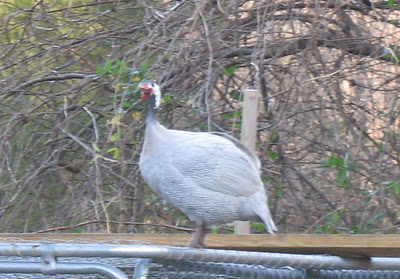 The guinea games will continue every day around Razzberry Corner.
at 6:00 AM

They chased off a deer?? Oh man, that is hilarious! I'll bet you sit and laugh.

My guineas have been being mean and bossy to the chickens lately, I may need to get another coop to separate the flocks.

The guinea's here have no problem with the sheep, goats, or dogs, maybe they just don't like outsiders?

I guess that makes the guineas good protectors?

Chased off a deer? I would have loved to watch that Guinea Game!

I know when we had a guinea she hated our rooster with a passion. She would grab him by the comb and drag him around the yard.
That makes me laugh that yours have chased a deer and everything else.
Now if they could just beat the owls.