Recently, for approximately the past week, I've been getting guinea eggs from my adult guinea hen that look like the egg on the left, which was laid Saturday.  It has a weak spot in the shell, which is shown in the top picture (picture #1).  Around the weak shell area the egg shell is whiter in color, not as brown.  And the egg is sort of flat, not as round as normal.  I always pick up my eggs the same day they are laid; Guinea Girl always lays in the chicken coop.
Saturday Picture #2 shows the other side of the same egg, which has a white spot in the shell color, but does not have a weak shell.
Now, let me provide some background ~ Guinea Girl was born in Oct 2009.  She's a very regular egg layer, usually laying every afternoon.  Rarely does she take a day off.  Her eggs have never been soft, in fact, I usually have a tough time cracking them.  The shells are like rock.  The guineas are somewhat friendly, and I've watched Guinea Girl lay an egg in the coop several times.  Guinea Boy is always by her side, singing.  She sings, too, before laying and after.  The male makes a nest and gets out of the way.  When the egg is laid it is soft and rubbery, within minutes it hardens into the typical rock hard guinea egg shell.  I picked up Saturday's egg when it was still warm and just starting to harden.

Here's Guinea Girl's egg from Friday.  The soft area actually has a hole pecked in, but the egg is not eaten.  In fact, the inner membrane is not broken.  All of the guinea eggs for the past week looked like Friday's egg: flat shaped, pecked, but inner membrane not broken.


Here's the other side of Friday's egg, showing the white colored shell.  Since this has been going on for almost a week, we of course increased the calcium for all the birds, guineas, keets, chickens, and chicks by providing oyster shells.  They are scattered all over their pen.  If we provide it for them, they eat it, and chickens scratch in it.

So, what is going on?  Why are my guinea eggs soft-shelled, broken, and flat???  I have researched this online but have not gotten any good answers.

Is Guinea Girl starting to peck her eggs when they are still soft (just laid), which is making them broken and flat?   But what is causing the thin shell?  Oddly, when I entered the coop on Sat, the egg was thin-side down, and Guinea Boy was sitting on the floor beside Guinea Girl, who was singing up a storm after just laying.  Guinea Boy was on the other side of her, further away from the egg.  Maybe a chicken is pecking the eggs after the guineas leave the coop?  I usually don't pick them up immediately after laying, a chicken would have had access to the egg on the floor for a few hours.  But that still doesn't answer the thin-shell question.  The birds are eating alot of calcium, at least the chickens are.  Maybe Guinea Girl is wanting to be broody and is sitting on the egg for a while after laying, which makes it flat and causes the thin shell because it hasn't hardened before she sits on it?  Maybe she pushes it under her with her beak like a chicken does, causing it to break?

~Update~ On Sunday evening Randy found Guinea Girl laying an egg in the coop, he took the warm, soft egg right after she laid it.  It looked just like Saturday's egg, no hole it in, but with the weak spot and discoloration on both sides.  Quickly it hardened up, and when he arrived in the house with it in his hand, it had a hole in it.  The hole broke into it as the egg hardened by itself!


Because the chickens are eating so much oyster shells these days, it appears their eggs are turning very light-colored.  One chicken is now laying almost white eggs (Freckles).  Freckles' egg is the 3rd from the left, bottom row.  She used to lay light brown eggs before the calcium increase. 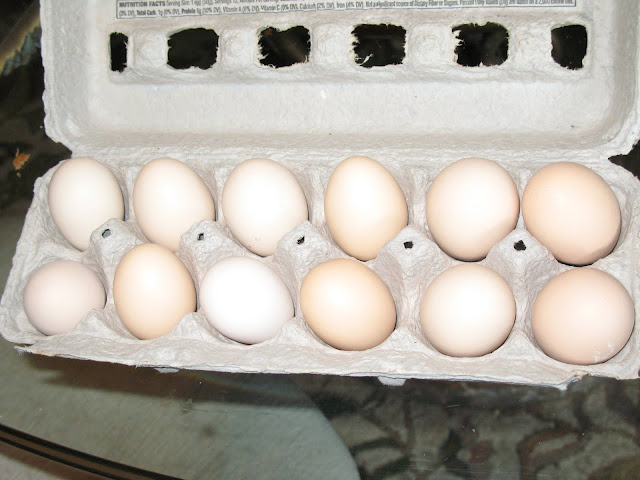 I'll welcome any ideas about Guinea Girl's eggs!
at 8:00 PM

I'm sorry I can be of no help, I too have egg issues.

I have no idea, but know my friend over at Rural Ramblings will know. She's had guineas for years.
http://www.ruralramblings.com/

Very interesting. My friend Lila gave me a dozen eggs from the farmer near here. They are various shades of brown. None real brown brown. He has guineas too. She said he said that the guineas were laying now, but they stop every once in a while. He doesn't know why. - You chicken farmers have interesting problems! LOL!

Wish I could help! It's very odd!

I'm another one stumped and with no answers. It is a fascinating problem though.

Sorry but haven't a clue as to why the eggs are like that.
I see John has already commented so if he doesn't know, well, maybe Danni does.
Always something going on when you have animals.
Hope you find the answer so you can share with us.

Brown eggs don't have softer shells then white eggs, do they? My friend said that when she went to crack a brown egg on the side of the bowl it shattered because she thought it would be tougher like a white egg and hit it too hard. I didn't think there was much difference.

CeeCee - now that we have power and things are settling down here again, I am going to ruralramblings for assistance! Thank you!

Barb - It's nice that you seem to be settling in so well in the new place!! I still cannot wait to visit! The thickness of the egg shell has to do with how much calcium the chickens are getting. Possibly your friend was buying eggs from chickens who didn't get much calcium. I've been giving my birds so much calcium that all the shells are very hard. Guinea Girl's eggs are like granite, except for the weak spot and the hole in the egg.

John Gray, Knatolee, Leigh, Cindy - I still have no idea, either. I am STILL getting guinea eggs like this. It's been over 2 weeks now. Guinea Girl is healthy and happy in every other way. I haven't had much time recently to think about the eggs, just have been collecting them every day, and musing over them. One day I'll find the answer, and it will probably be something simple, but I'll be sure to post it!