Who's the most handsome rooster?

Li'l Puff thinks "he's all that".  He has requested I remove the "Li'l" from his name and call him "Puff", because he's a big, bad rooster.  He's approximately 3 months old now.  He crows all the time, more than the big Leghorn rooster, Leggy.  Puff's voice is still tiny and squeaky, but he thinks it's just fine.  Puff doesn't really notice much difference between his crows and Leg's crows, although behind his back all the hens laugh at his high-pitched voice.  He "peeps" still - all the time.  None of the other chickens make that peeping sound still, except for Puff.  Everyone else is developing their adult chicken voices, but Puff is still stuck with a high-pitched "peep".  He's constantly strutting his stuff in the chicken coop, although he's smaller than many of the other chickens.  Puff believes his "hair" is so sexy; he appears to have moussed it up.  None of the other chickens have a puffy head, and they don't really like his 80's puffy look, but he doesn't notice.  Puff has picked a fight with every other rooster and most of then hens.  He lost most of the fights.  But in his mind, he was just being nice and giving them a chance to win a fight.  Puff still likes to snuggle with me, and loves his puffy feathers to be puffed up even more.  He's the toughest, roughest, little baby rooster with a puffy head. 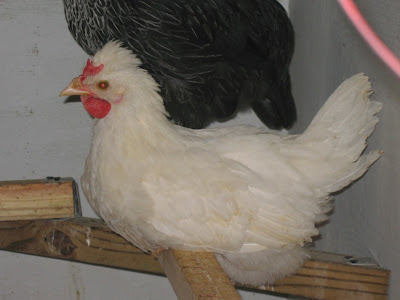 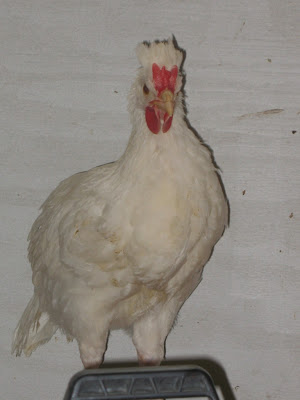 Rear view of that puffy head 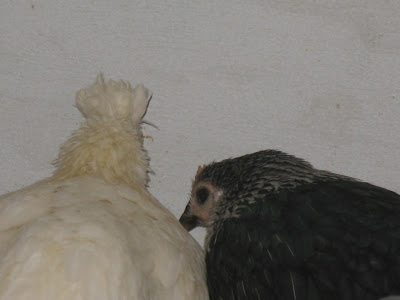 Puff and Betty, the black hen 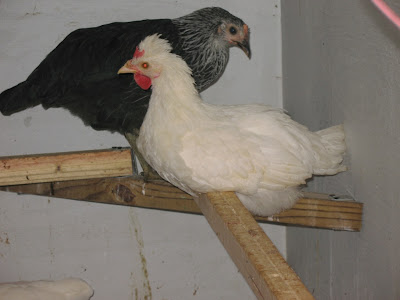 I believe Puff is a Polish mix, but I'm not really sure.  He is all white, most always has red eyes in photos, and has pinkish legs/feet.  He may be strange-looking, but I like having a unique chicken, and he certainly keeps me entertained!
at 5:00 AM

Li'l Puff, oh excuse me, Puff, sure is unique looking! I love his 'can do' attitude! Reminds me of that story about the little train who could. What a funny guy. Hopefully his big boy voice will come in soon so the girls won't point and laugh at him! :)

Puff is so cute! I love his head feathers! Mom's a writer, you should have her use him in a story!

Aren't chickens just the best. They remind me of people, they do things just like people. You are so right. They are very entertaining.

Puff- I am sorry to say my girls would probably laugh at you as well. But do know this, there would be a special place in my heart for you!

I don't know ...but those who do not love chickens are missing something. Love your 'lil' Puff story. I too love the deer post .. Because of the weather I have been seeing deer in my yard too. I am putting corn out for them. Unfortunately they wait to almost dark or later, so I can't get pictures..

I *love* that you have a rooster who loves to cuddle!
Looking at his sweet little hair-do, he certainly looks like he's got some "polish" chicken genes. And Pip, my white crested black polish rooster (that I had to re-home, used to have a much higher-pitched crow than Roopert, my big bad roo, does now.

Puff, you are SO handsome!

Looks to me as though Puff is growing up to be quite the rooster! I can't wait to get our chickens.

Cindy - Yes, I certainly hope he loses that tiny voice! But as much as he crows, maybe it's not that bad...

Linda - Yes, the chickens are entertaining, that's for sure! And more work than I thought...

Jalynn - Maybe I have the deer during the day, but you have the birds! You always show such great bird pics on your blog!

Danni - Now our big leghorn roo, Leggy, he REALLY loves to cuddle. He's my big baby boy. And he's still the man of the flock, too. Interesting that your Pip had a higher voice... Hmmm...

Leigh - It sounds like you are really preparing for your chickens!