A morning at the farm

June is here!  June is one of my favorite months.  Well, I love every month between April and September.  Summer is the best!

I've been busy here at Razzberry Corner.  The days have been flying by with no spare time to waste.  At the end of each day I drop into bed exhausted.  This type of schedule leaves little time to blog!

This morning I decided to take some photos of my activities and post them right away just to show you a morning at the farm.

I open my front door and find the guineas on the front porch eating the outside cat food.  They love cat food - silly birds.  They leave when I come out. 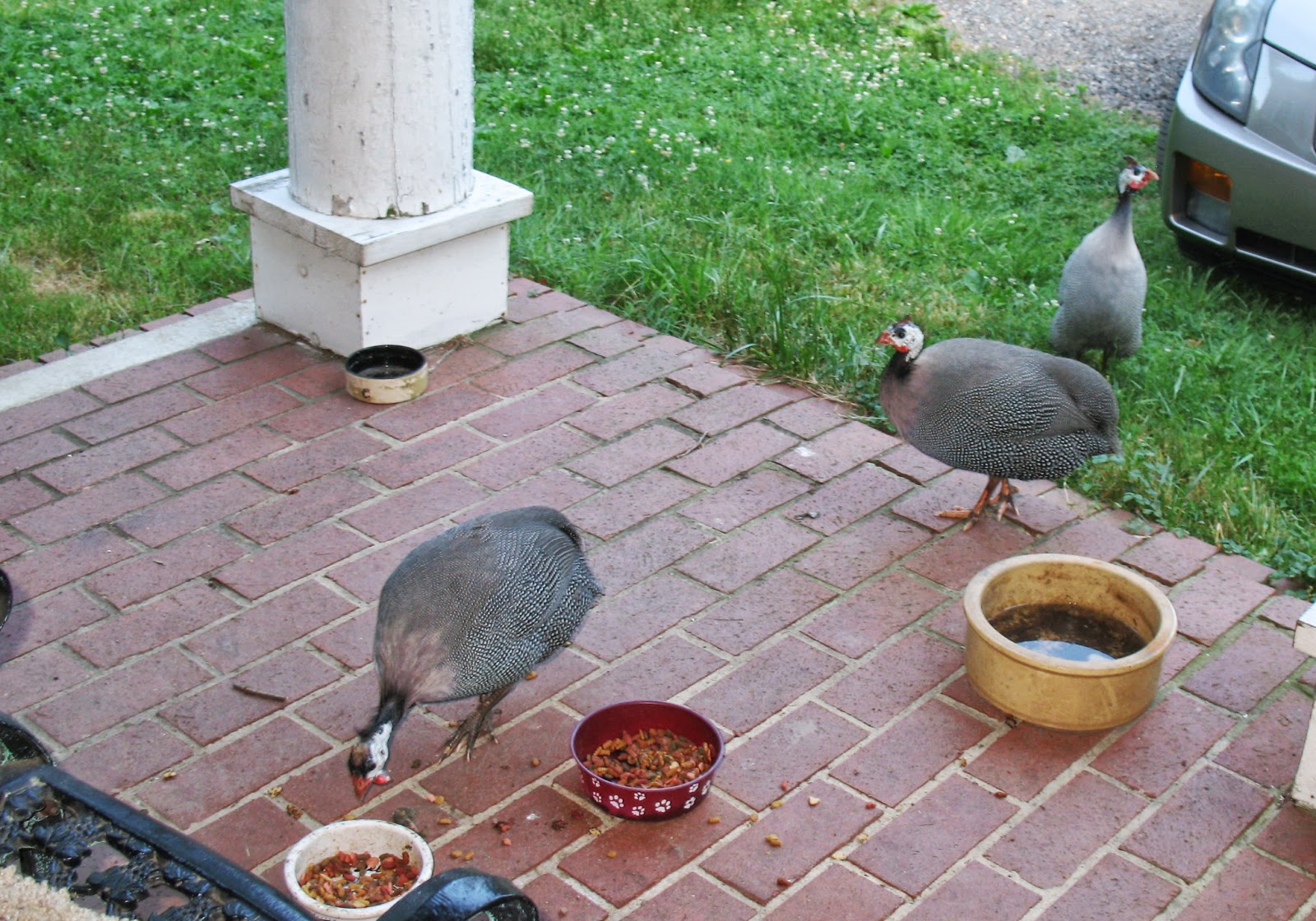 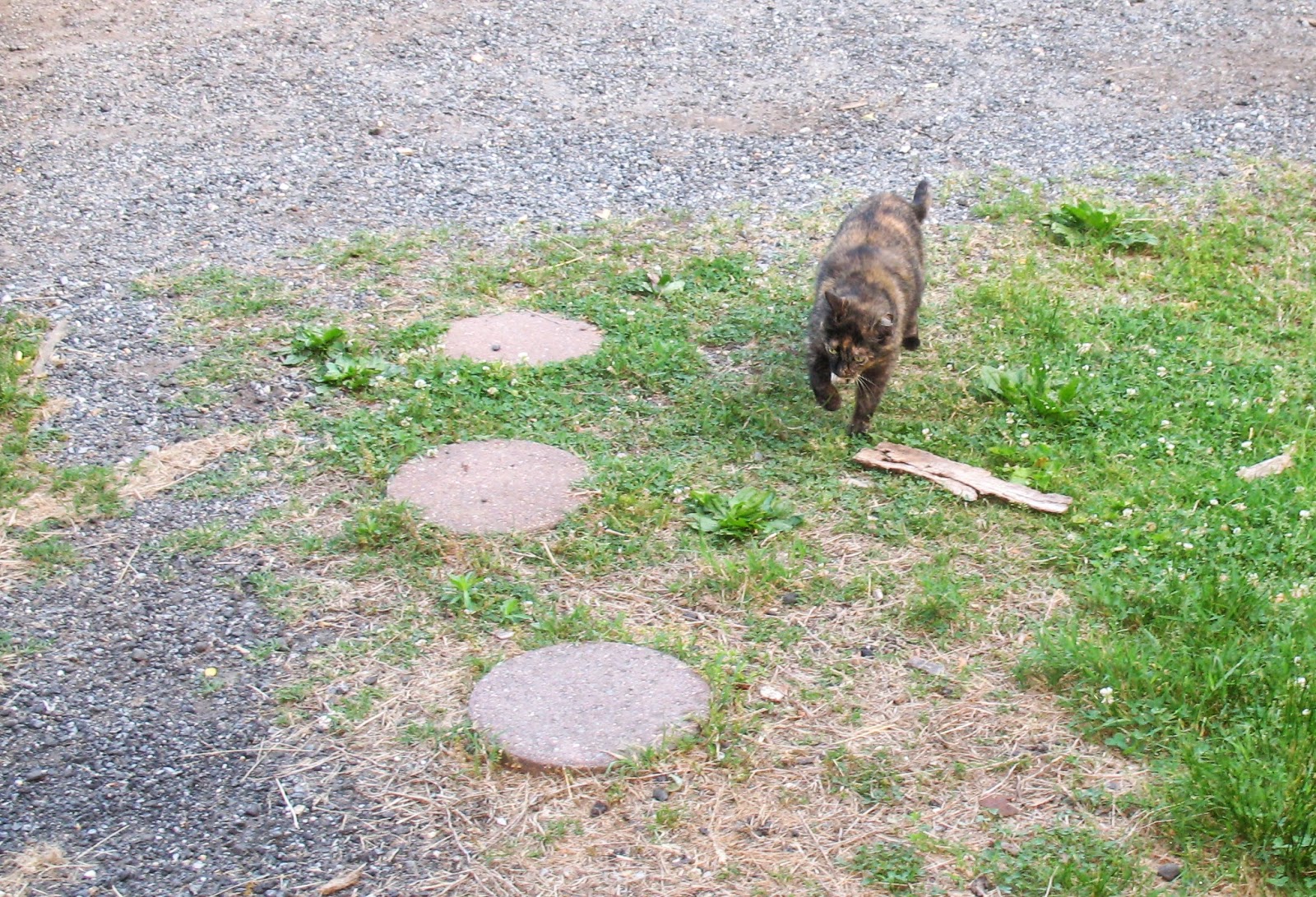 Sweet Brindle comes running to me as soon as I walk outside.  She's a darling kitty.

Benjamin comes up onto the porch, too.  Both outside cats love to be pet.  They are both shedding terribly right now, losing their heavy winter coats.  I end up covered in cat hair after petting them.  They follow me as I walk out in the yard, Brindle making little mews talking to me as I walk. 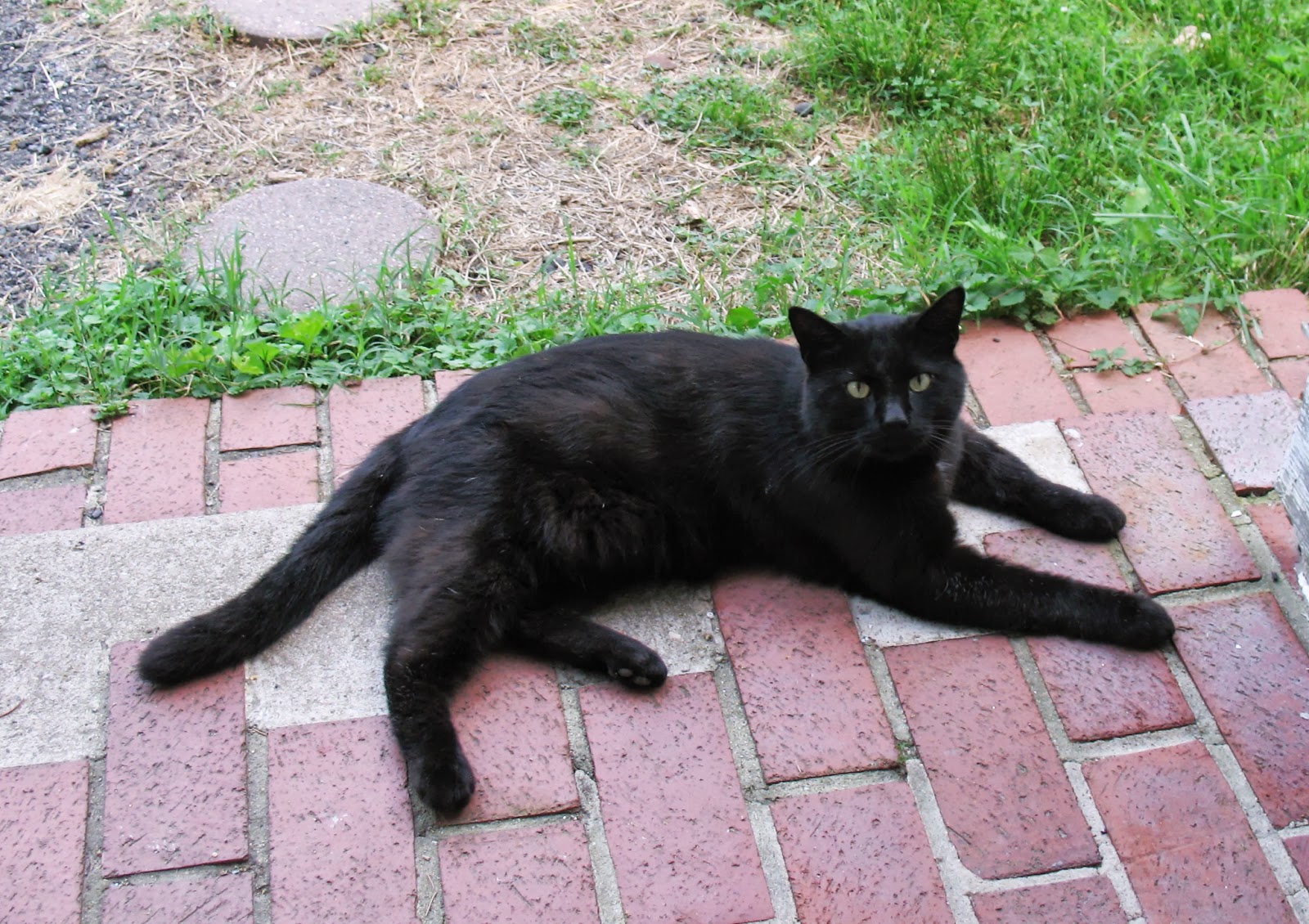 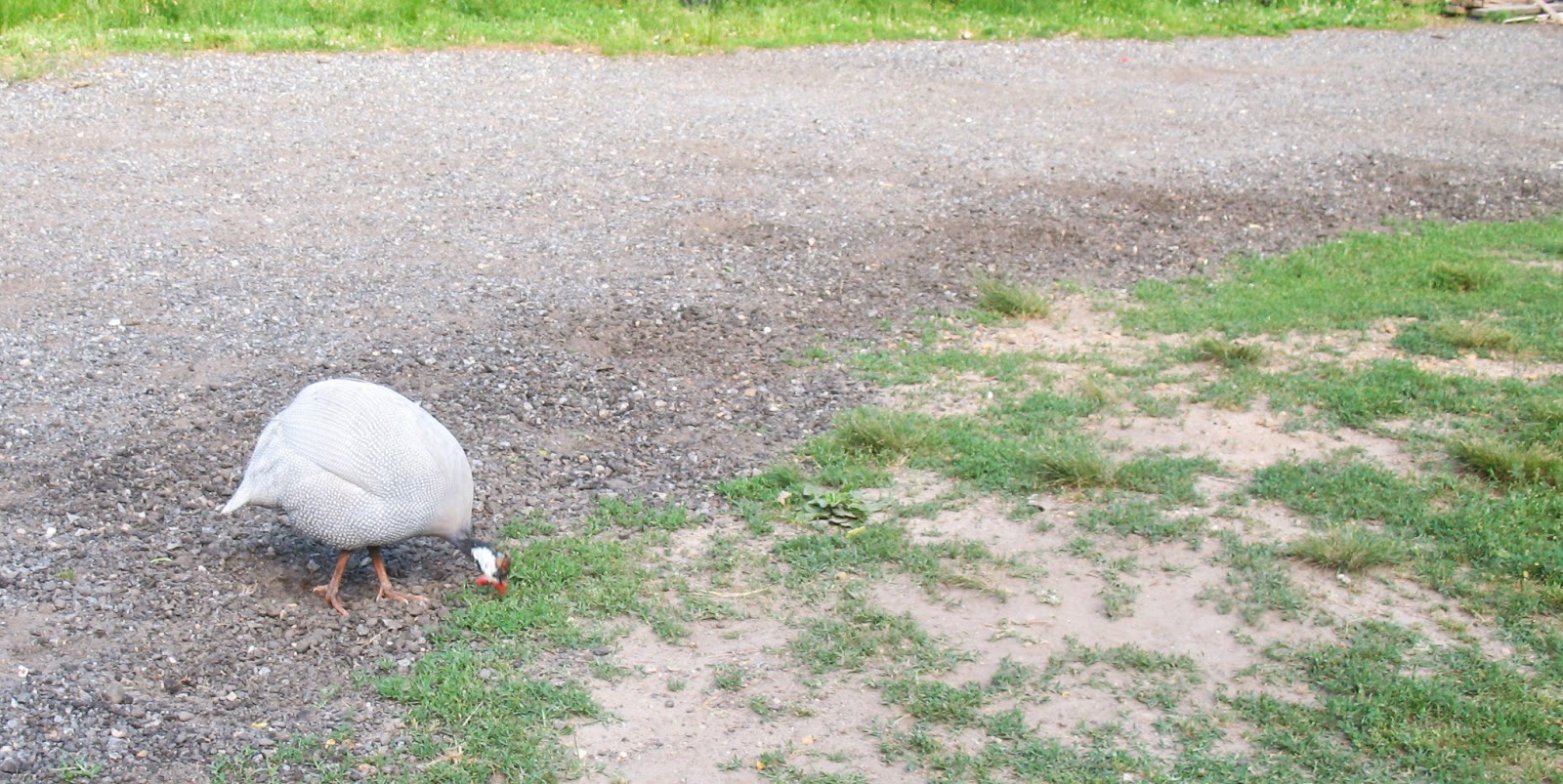 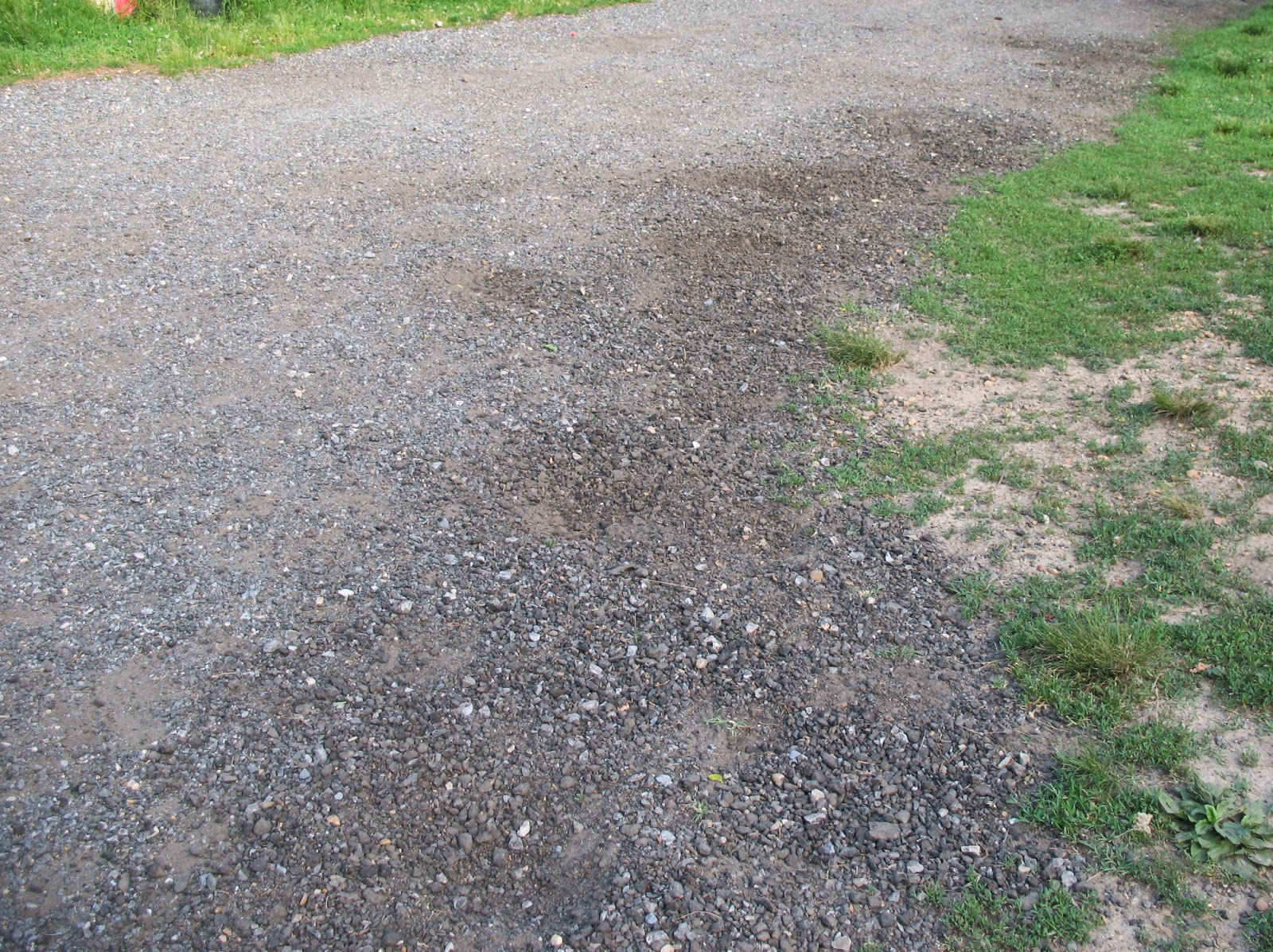 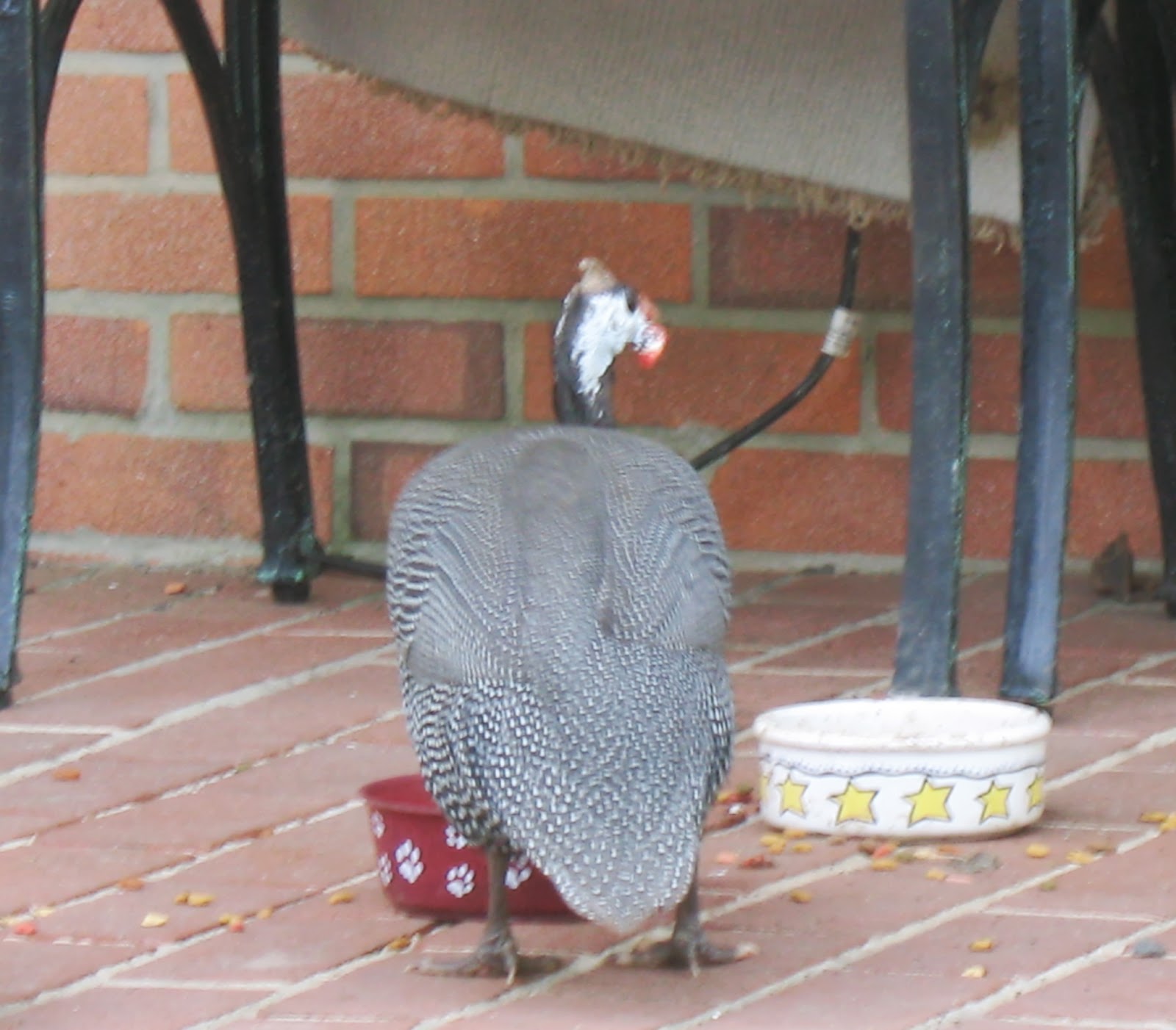 As soon as I walk out to the driveway one of the guineas sneaks back up onto the porch to continue picking at the cat food.


It is with a sad heart that I tell you we lost our white female guinea and my favorite - the dark spotted male to foxes in the past week.  They were my two favorite guineas.  The flock is incomplete without them.  The male guinea was the one that sang beautiful mockingbird songs in addition to guinea honks. 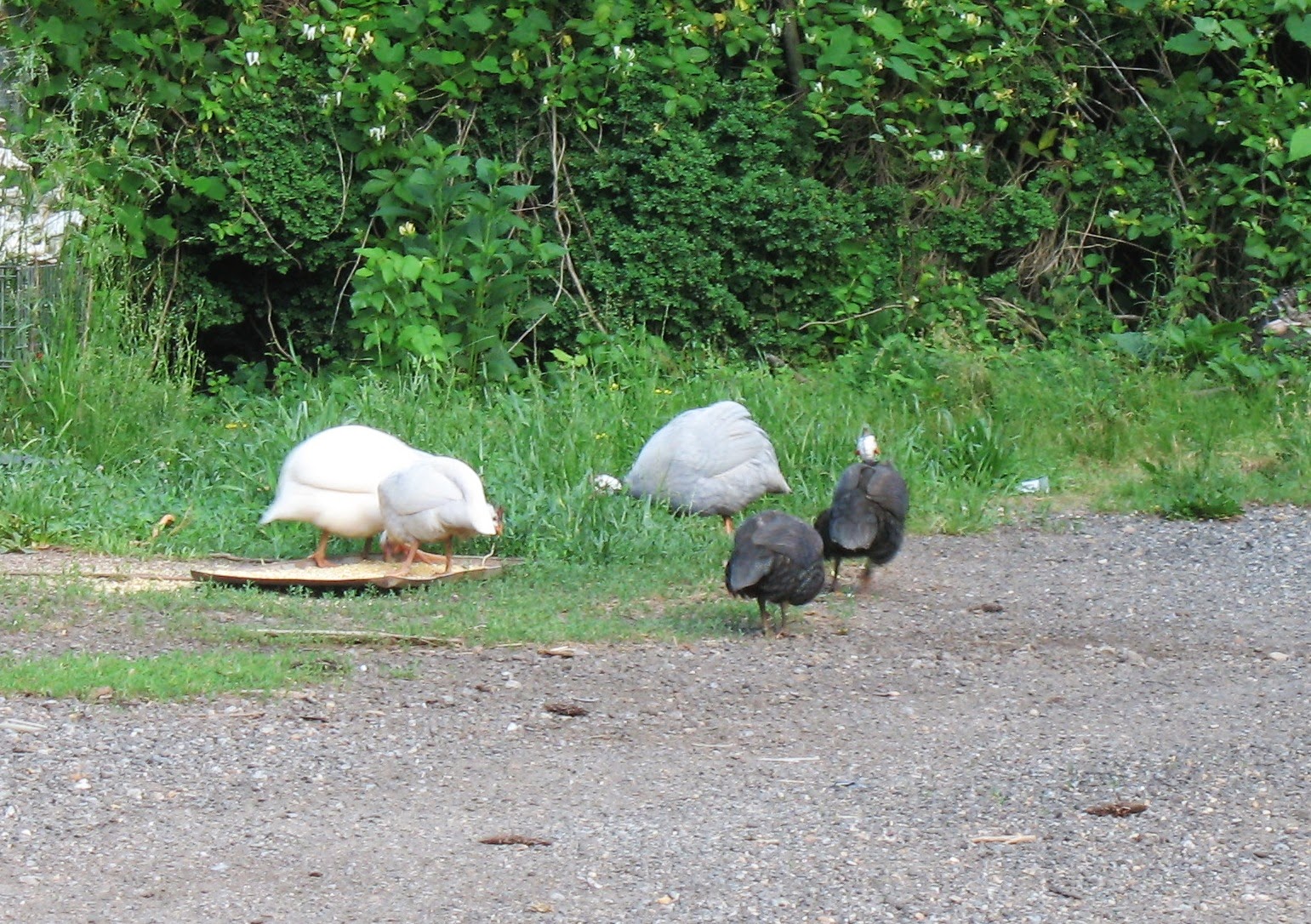 "Mew!" says Brindle.  This is translated as "Pet me!"  She loves to walk on my car, much to my husband's chagrin.  My car always has Brindle foot prints on it. 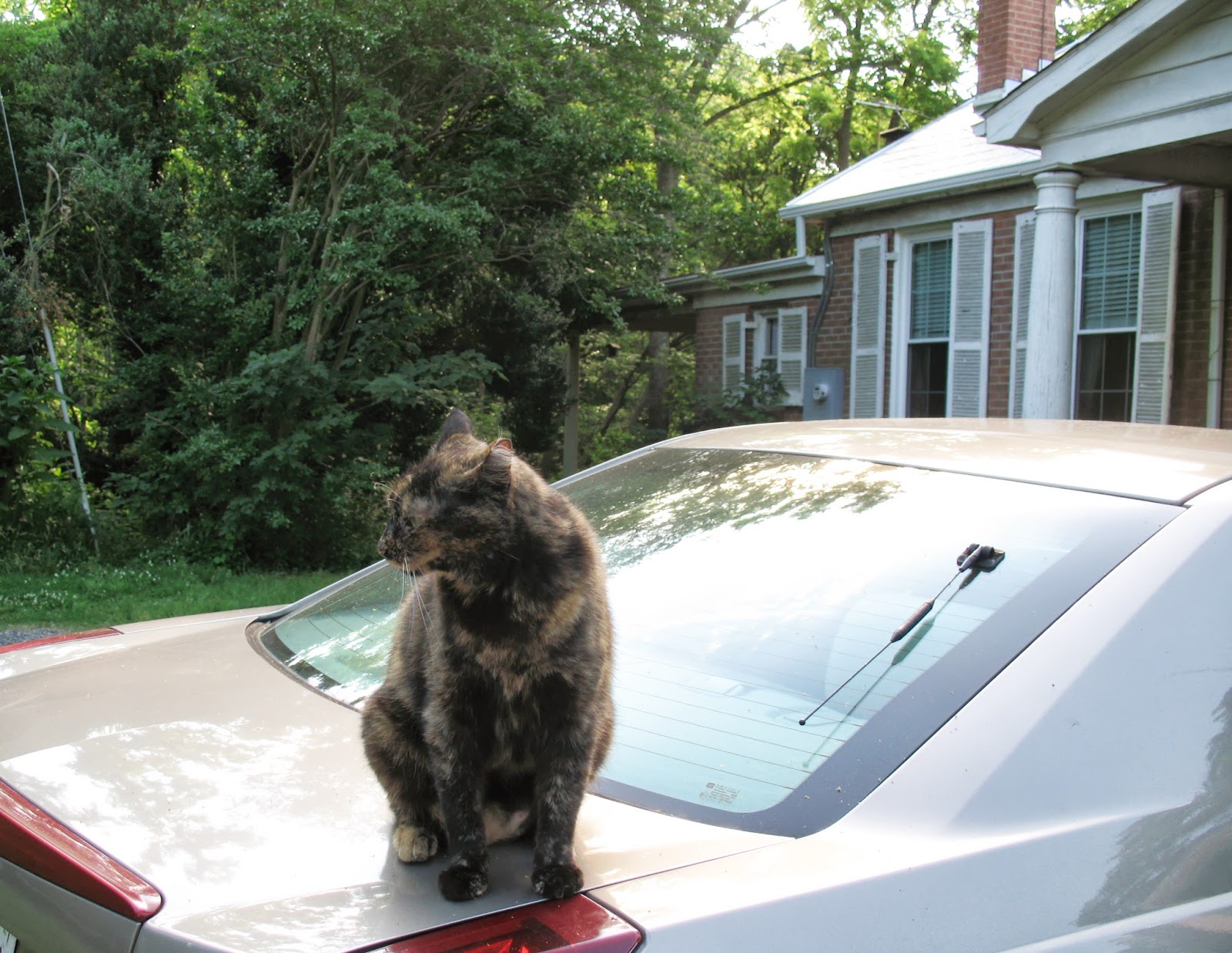 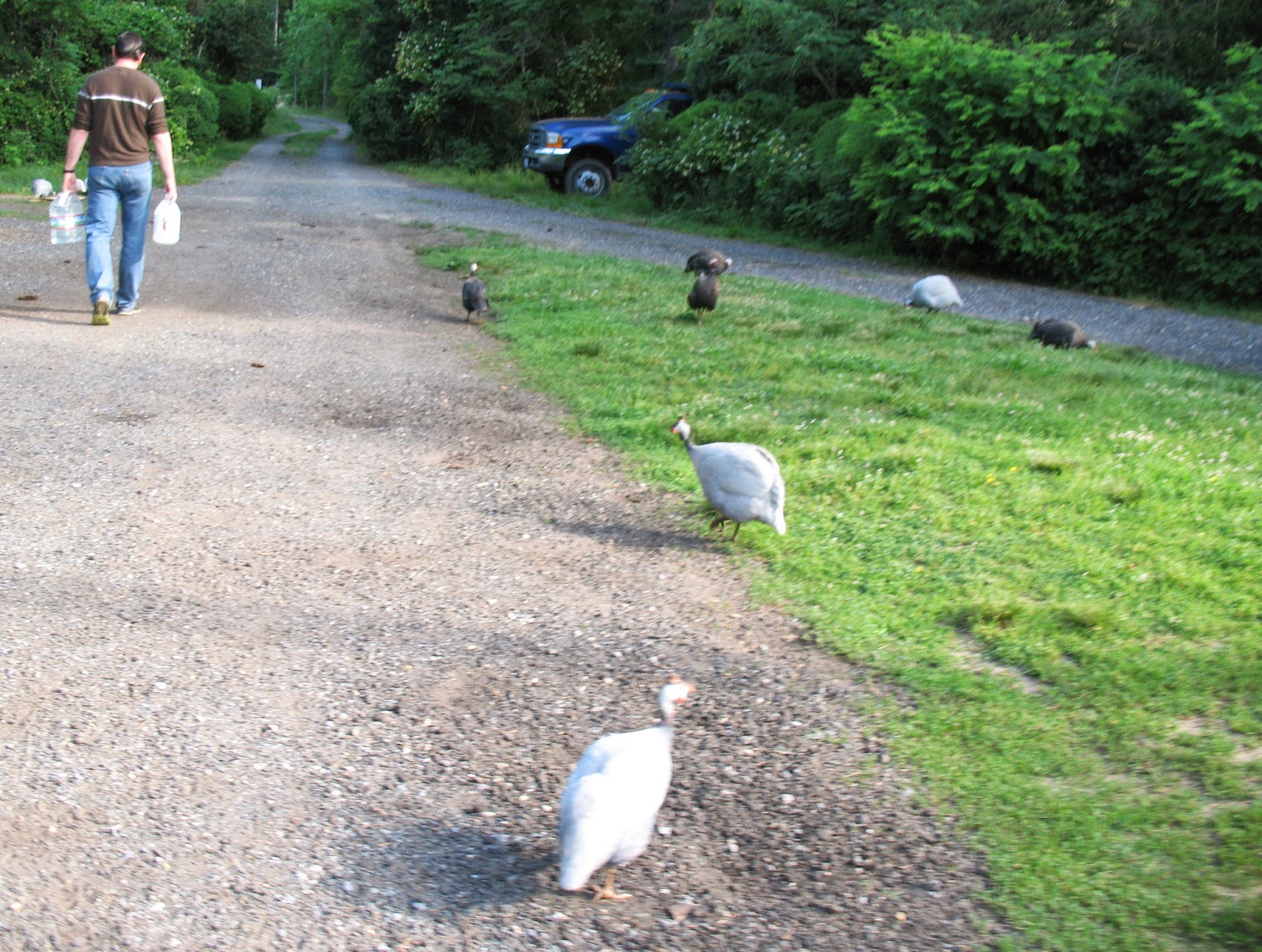 Randy comes out carrying gallons of water for the chickens.  I follow to get some chicken pics.

The chickens love when Randy gives them water and their waterer gurgles and he splashes the old water around in the pen.  They all drink  like they were dieing of thirst, even though they had water before.  It just wasn't "new" water, which tastes much better than "old" water, according to the chickens.

Here's Bonnie, the former shelter hen.  She's the big hen in the photo below.  Bonnie loves to eat, she just will not lose weight.  She is a pig when we feed the chickens treats- she stands right in the middle of the food dish and gobbles and wont let anyone else eat.  I have to laugh.  She had a hard life before coming to us and I'm glad she's happy and free now.  She is walking just fine now, she even runs sometimes. 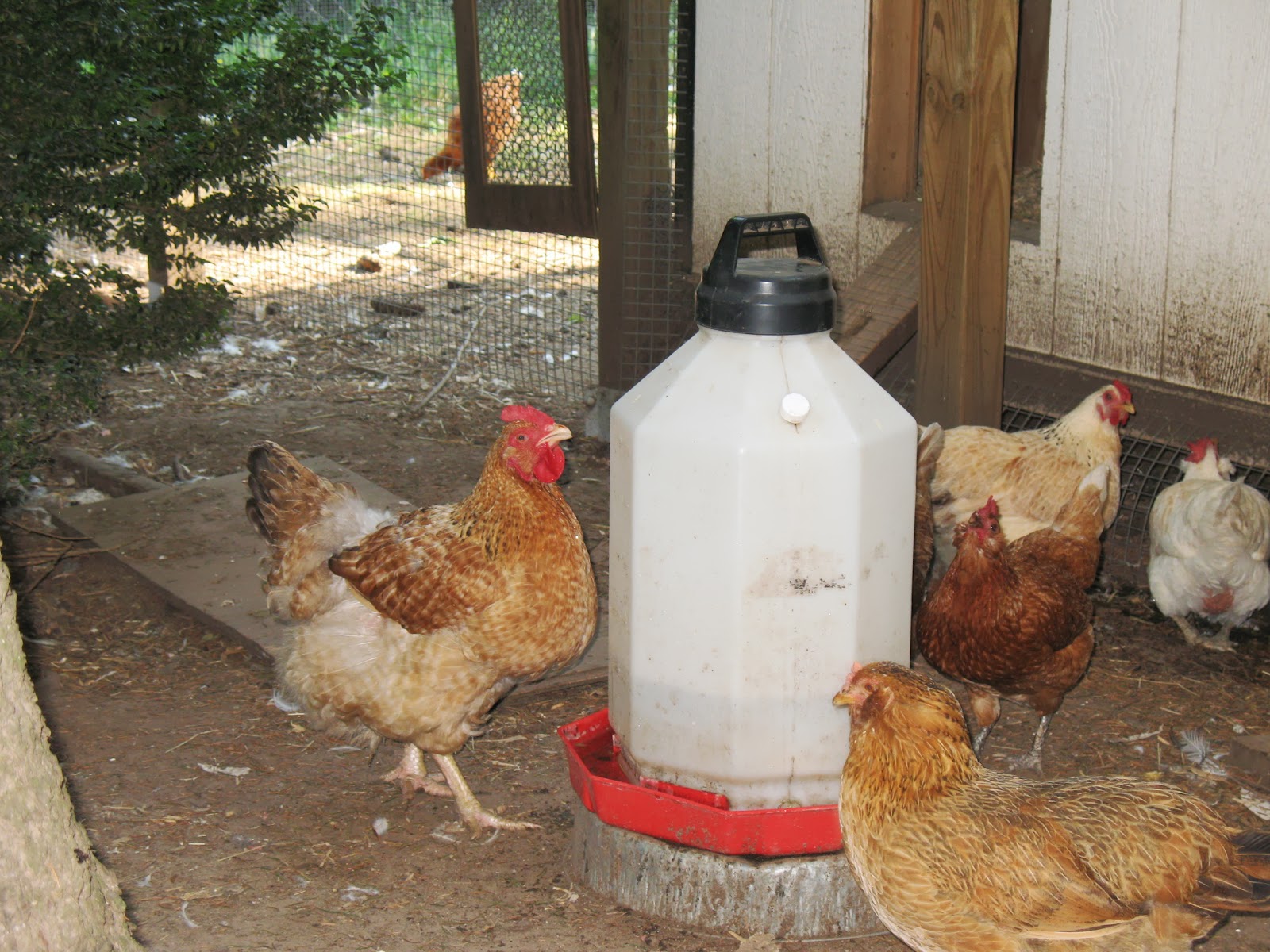 In front of the waterer is Virginia who we found on Craig's list.  Virginia used to lay green eggs, she's an Americauna, but she's stopped laying now.  Then Jade is behind her, who we raised from an egg - Jade used to lay both green and brown eggs (but now she's stopped laying, too).  Then Freckles is the yellowish spotted bird behind her, who was the original mama hen that raised our first batch of chicks.  And Zoner is the white bird with the naked butt, who is Freckles' daughter.  And you know, Freckles and Zoner both aren't laying now, either.  We have a lot of older hens.  Every chicken has a story, that's for sure. 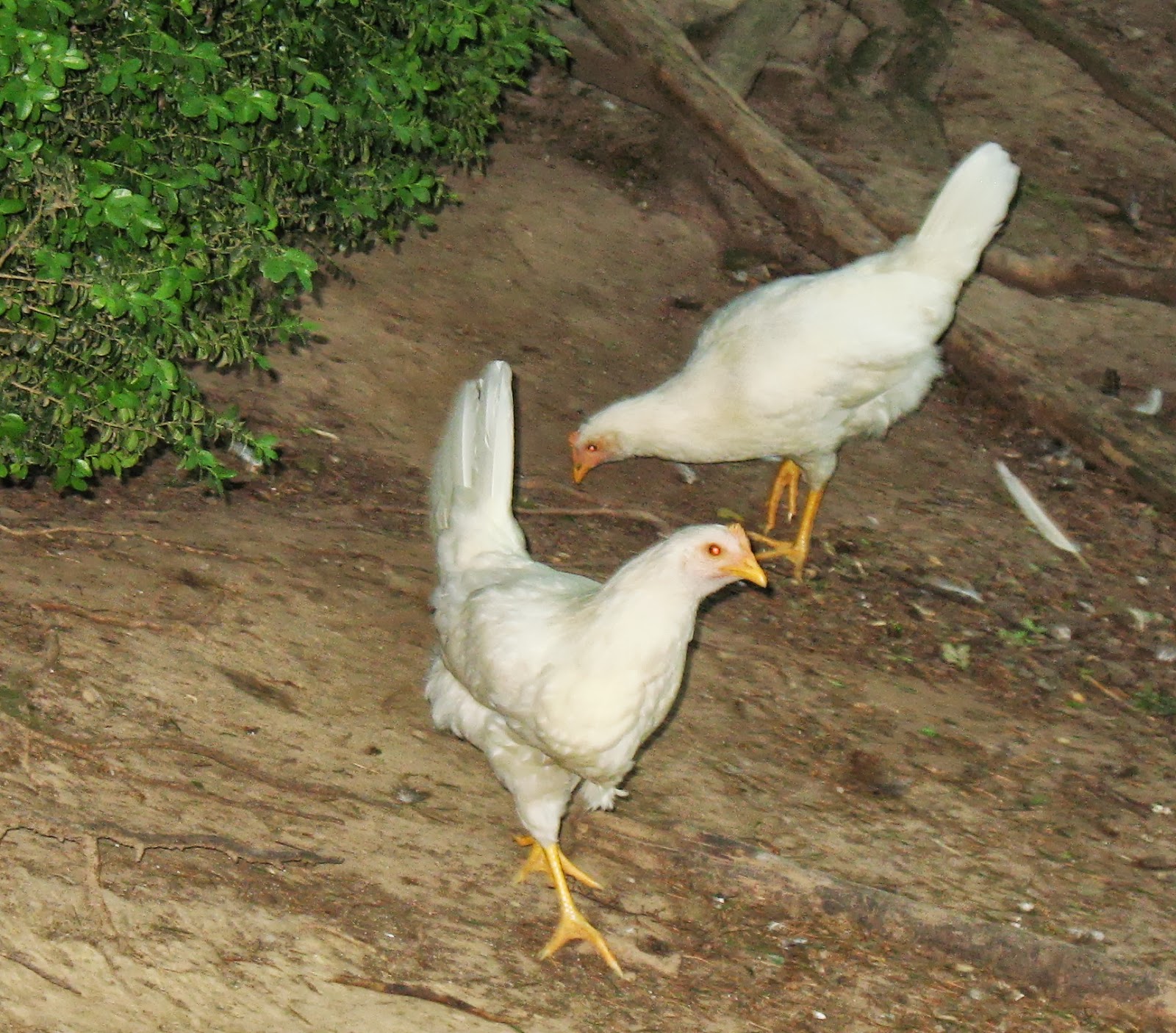 Because we have so many old hens we picked up 10 pullets from the feed store this spring.

The spring chicks have mostly all grown up.  Here are two of the four white leghorn pullets we bought.  I love them - they are so skinny and fast.  It's hard to get photos of the chicks because they all are always darting here and there. 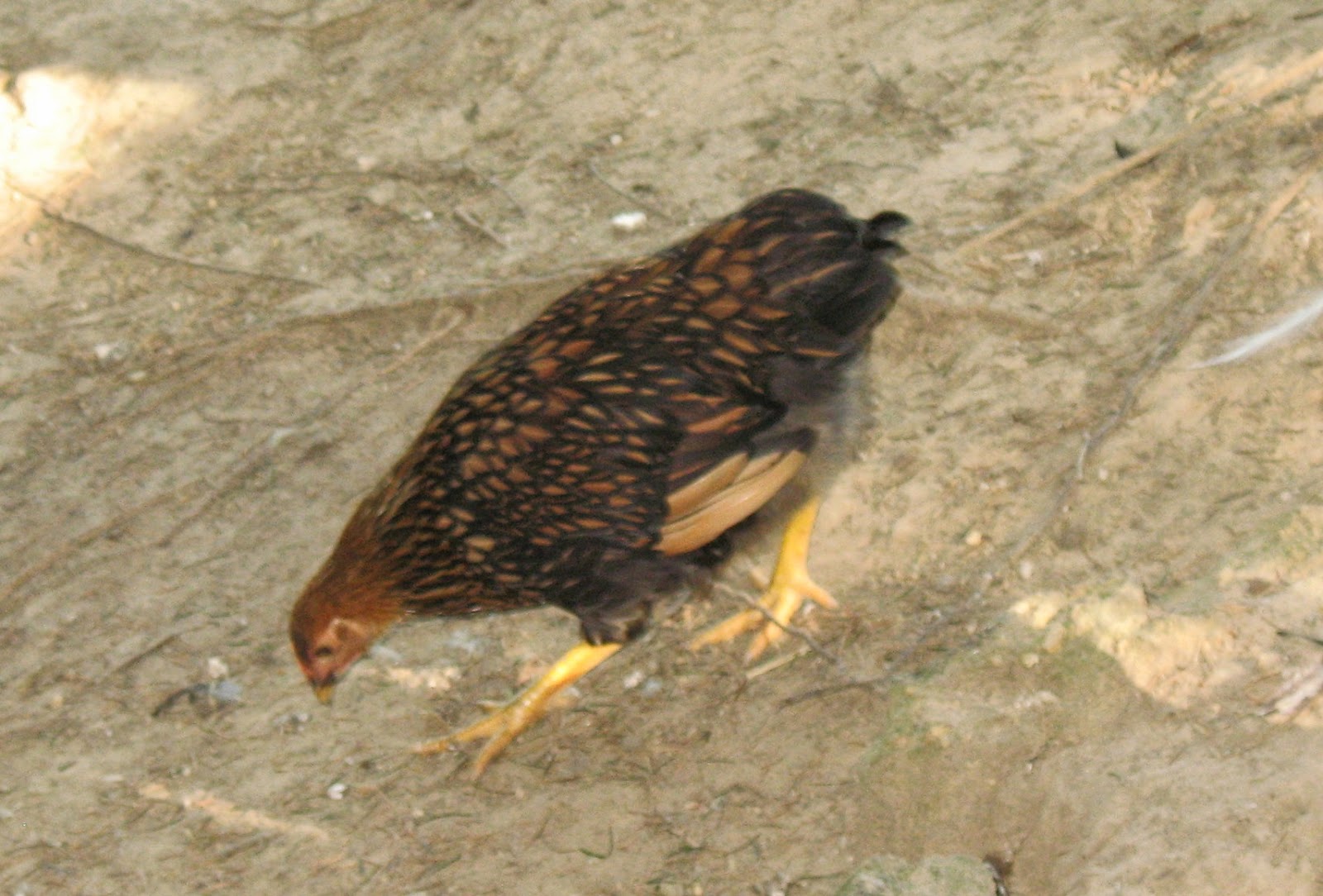 Below is who was supposed to be the third golden laced wyandotte pullet.  What's wrong with it?

First of all, it's a silver laced wyandotte, but that's ok.  I wanted golden, but silver would be fine, too.

But more importantly, it's a boy, not a girl.  We purchased pullets from the feed store, as we didn't want to deal with roosters.  We have 2 roosters already and don't need anymore.  However, this sweet little bird, who had become my favorite of all the chicks because of his cute personality, has turned into a cockerel.  He likes Leggy, the white leghorn rooster.  He follows Leggy around and has crowing contests with Leggy.  It's quite funny because he can't crow very well at all.  He sounds more like a cat choking, but he's trying.  So far he hasn't attempted to fight either of the 2 roos. 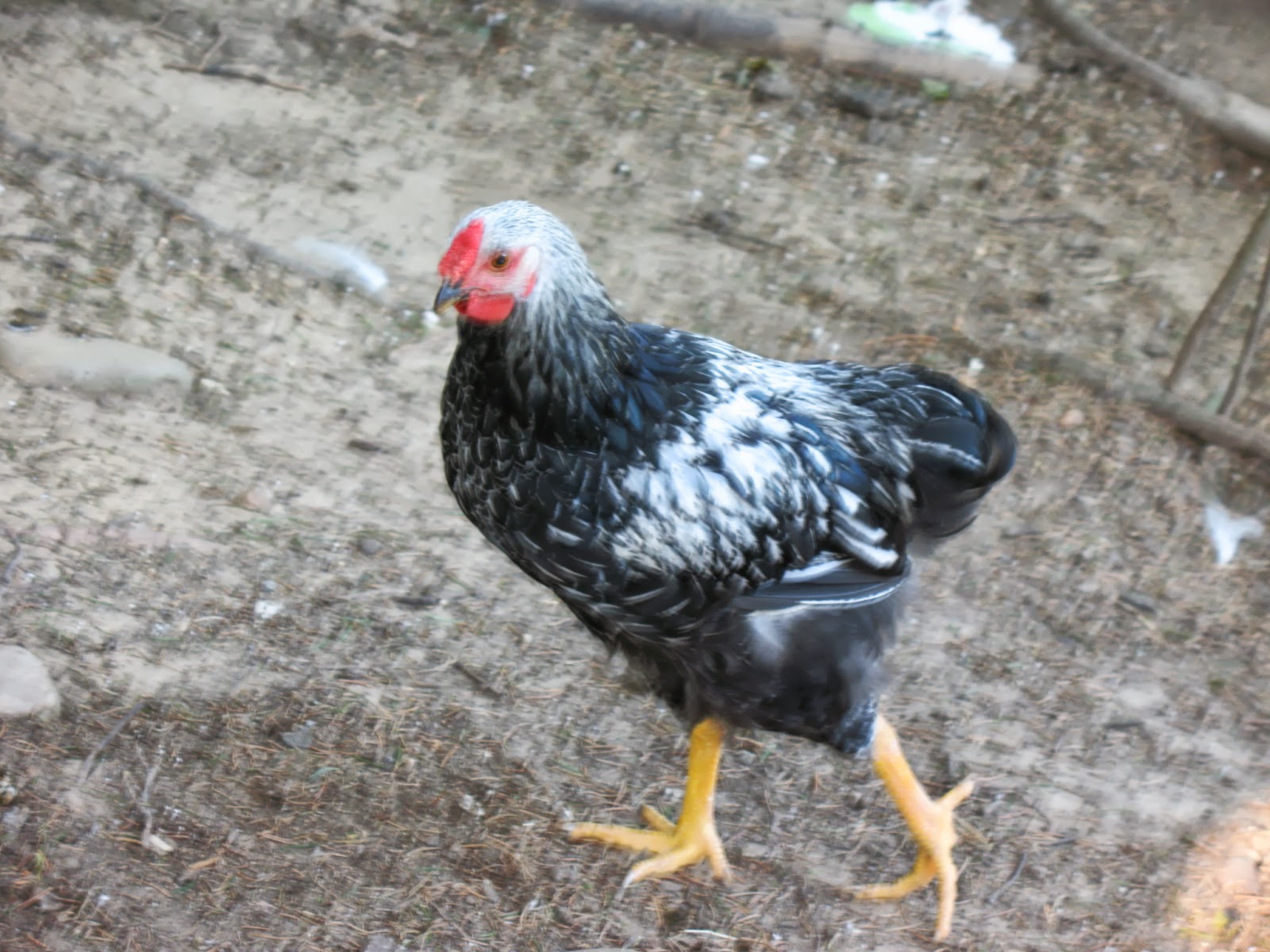 If he starts fighting and causing general disarray in the chicken pen when he gets older he will have to find a new home.  So far he's fitting in well so he's still here, but we are keeping our eye on him. 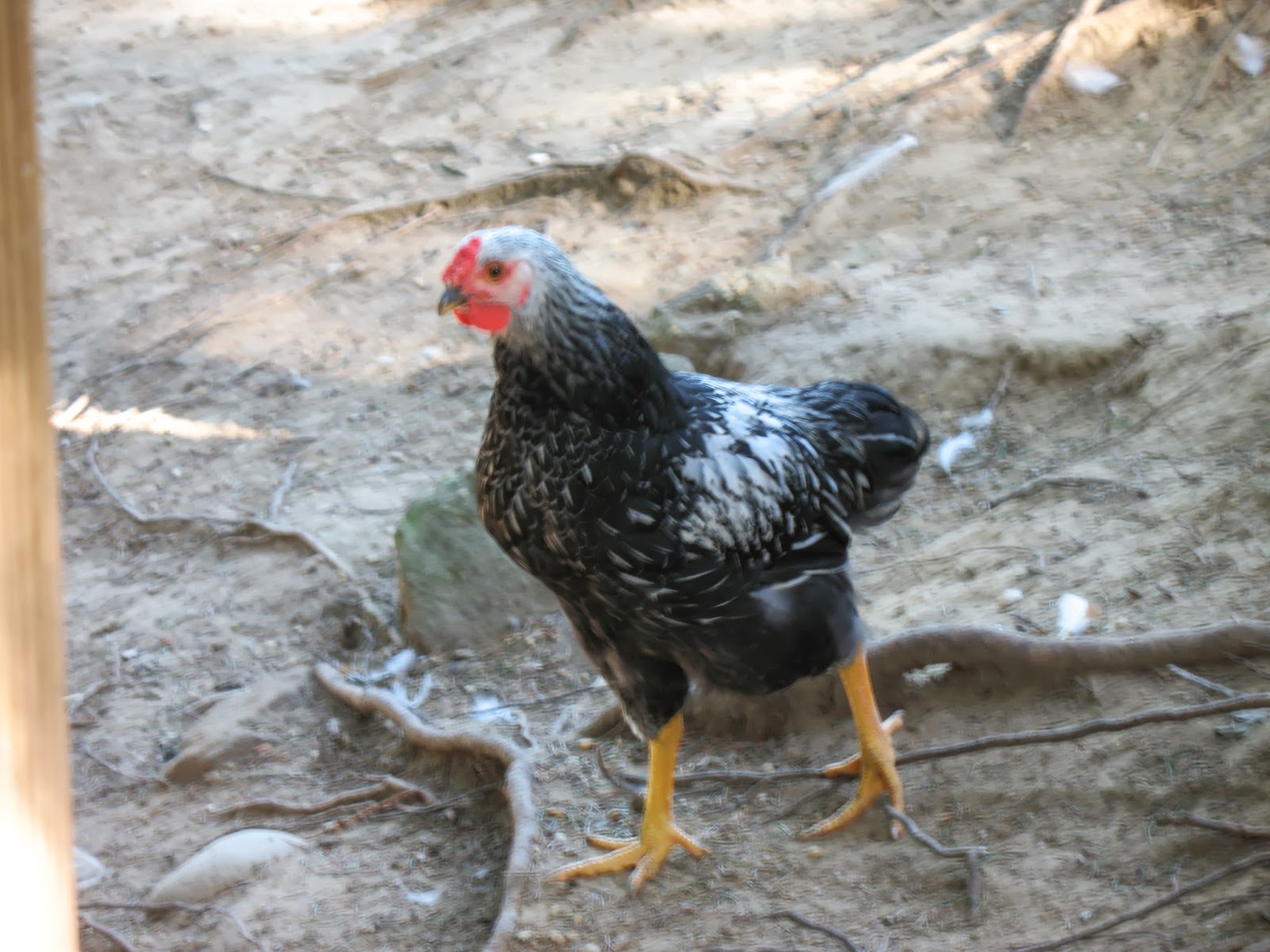 And that was 15 minutes out of my morning.

So sorry to hear about the guineas getting eaten! The rest of your chickens are looking good, though. Why do the guineas dig holes in the driveway? For dust baths?

Very nice post. It is always great to get caught up with you and your chickens and cats and guineas. So sorry that those foxes got your favorites.
I always love your chicken stories.

Great pictures of the guineas! Sorry for your guinea losses though. I find it hard to believe that wild guineas somehow survive on the African Plains.

Aren't the Golden Wyandottes beautiful. They are what we have (mostly).

Your flock and cats are all looking wonderful!

I've heard that three roosters are better than two. Time will tell! :)