Three weeks ago we found our sole guinea hen hatched 17 guinea keets in the woods.  We captured them all and locked them up in our chick coop.  Yeah, we had Brahma chicks and their adopted mama hen in there, they got pushed out to the general chicken population to make room for the infant keets!

And so we watched as the keets grew.  The keets learned that humans brought food, the mama hen learned to hate humans less, but she still hated being cooped up.  The private chick pen was reinforced around all sides with netting, as it was just chain link fencing, and the keets were tiny enough to walk right thru a chain link fence.

And then the big day came - it was time to let the keets out of the coop and into the chick pen.

The little sliding door has been closed the last 3 weeks. 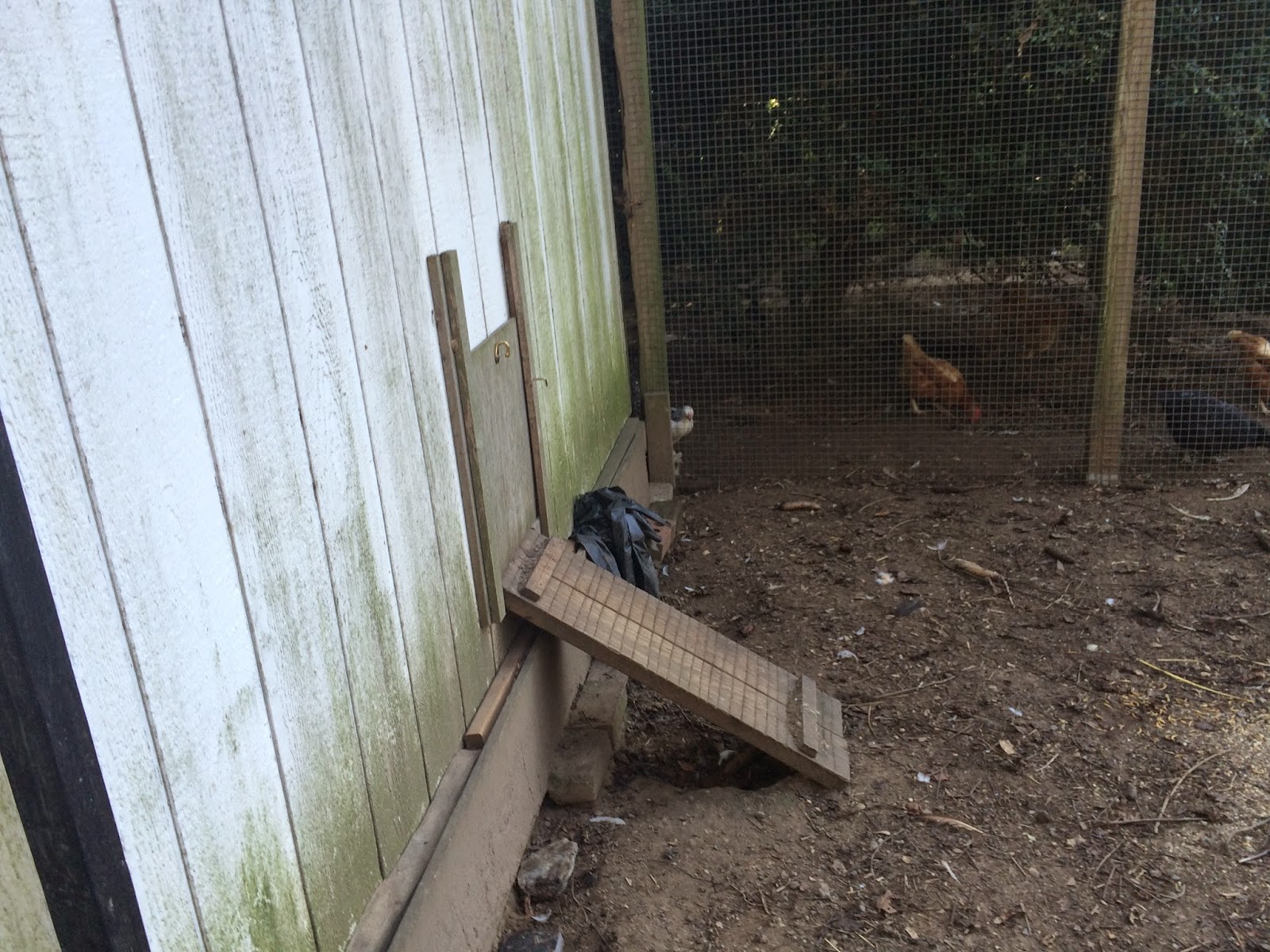 The chickens are watching through the fence going into the big chicken pen.  Everyone knows that something exciting is going to happen! 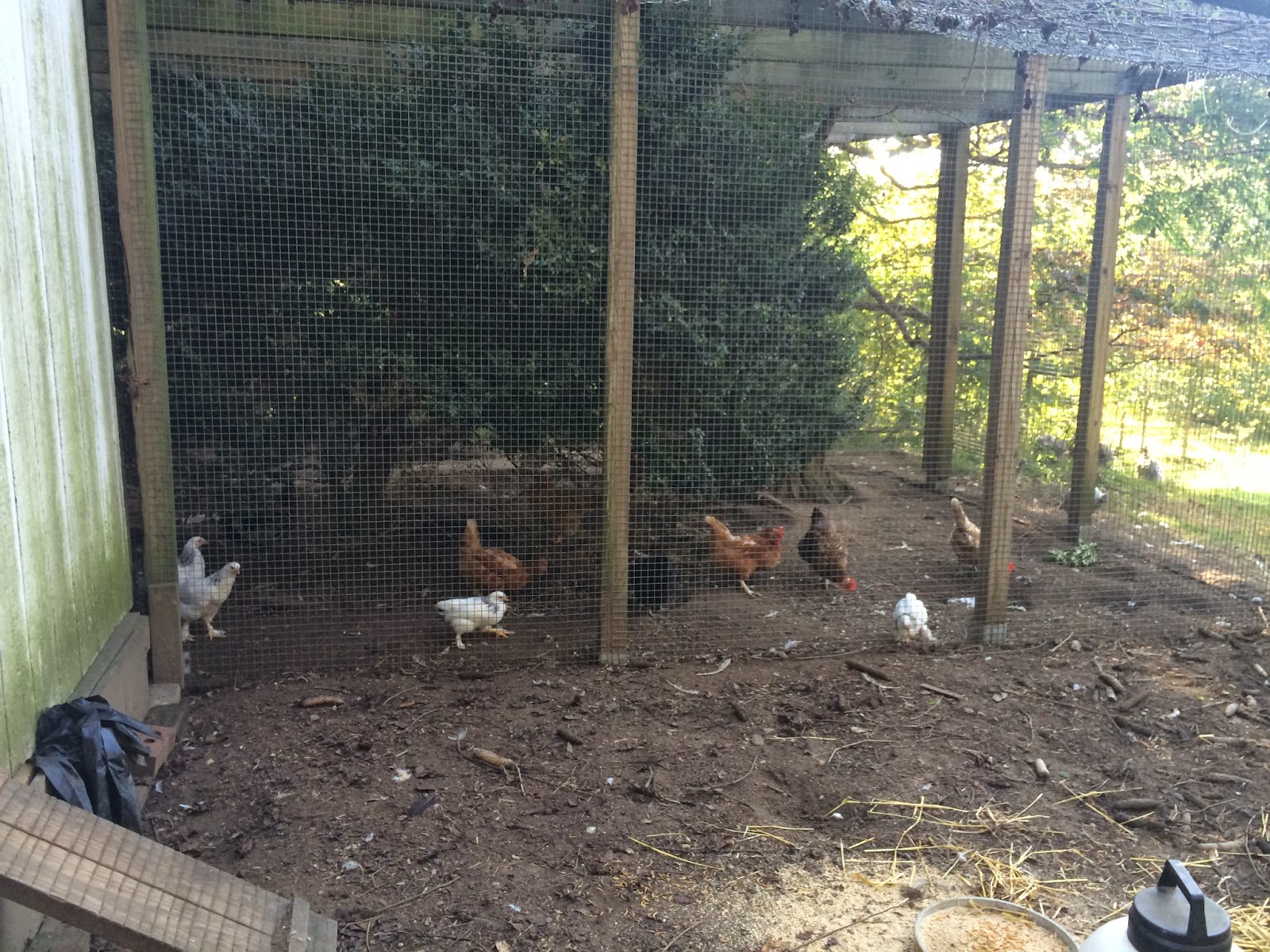 Here come the 6 adult male guineas along the right side of the fence.  The adult guineas roam free, they're not penned at all.  They know their friend and wife is locked up in that coop.  The female guinea used to be a mate to a dark male guinea. 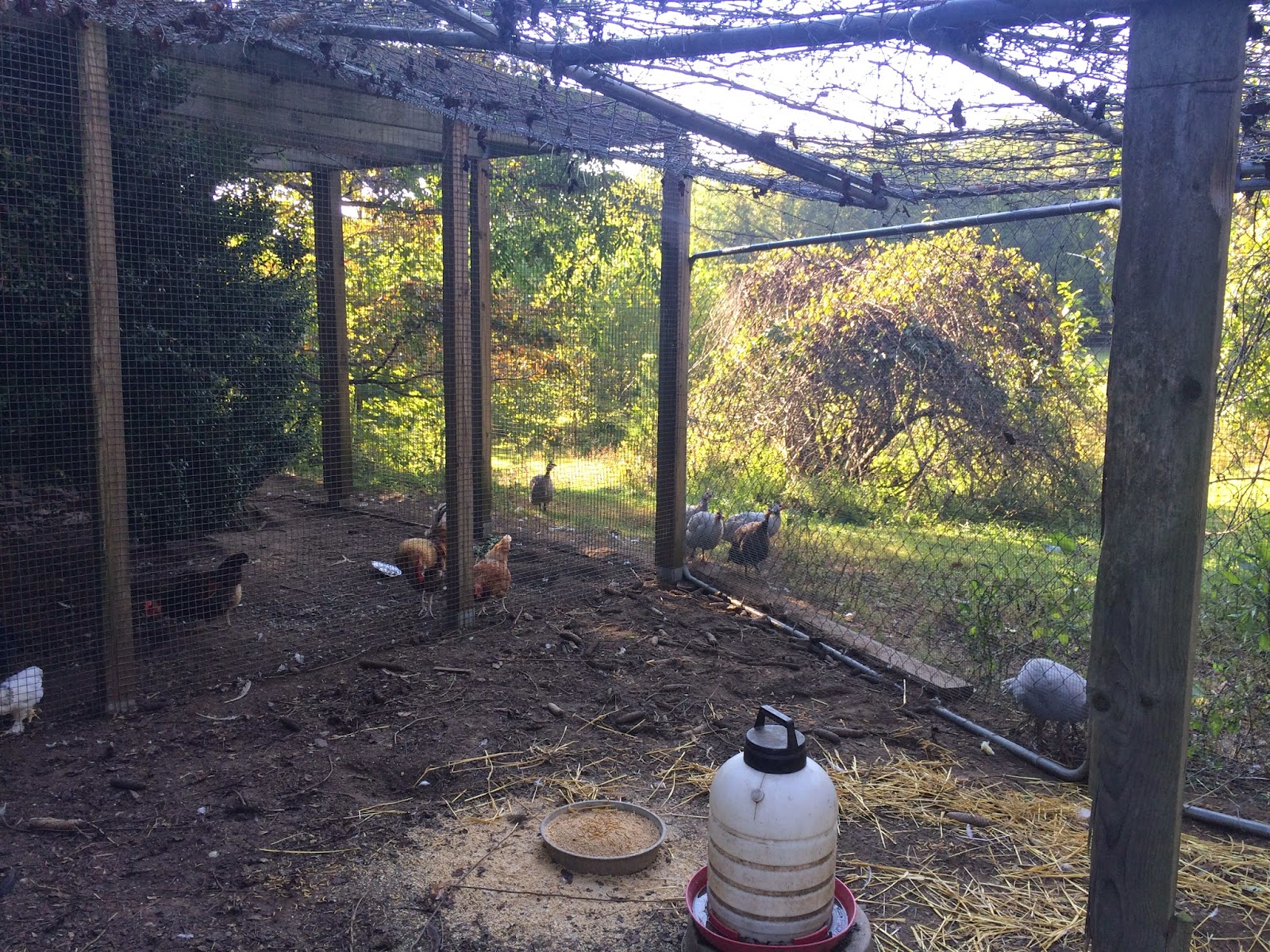 Here are the Brahma chicks watching through the fence - they are white with feathers on their feet and legs.  They miss their private pen, but are doing fine mixed in with the other chickens. (By the way, so far I love Brahma's.  They are very sweet chicks!) 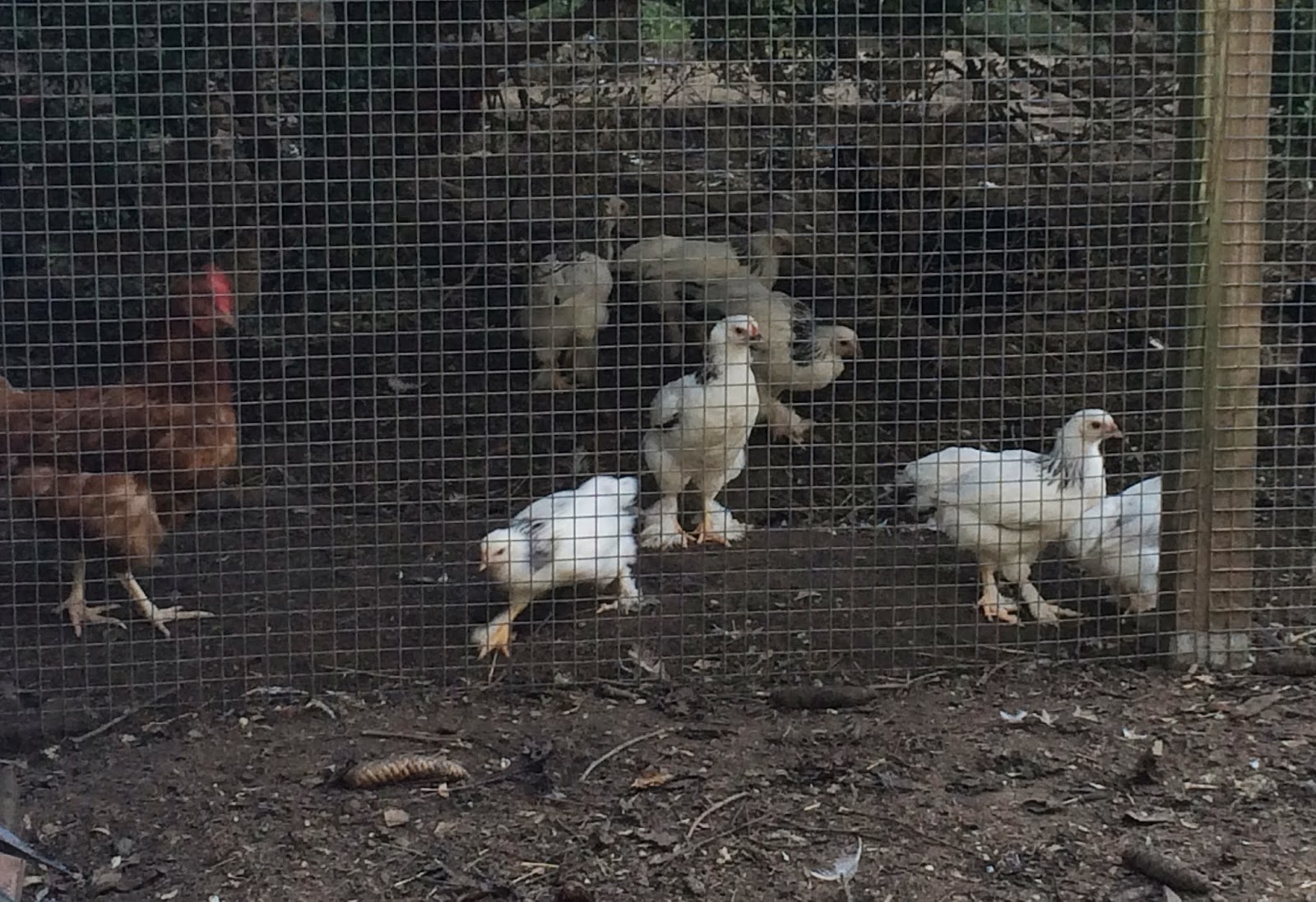 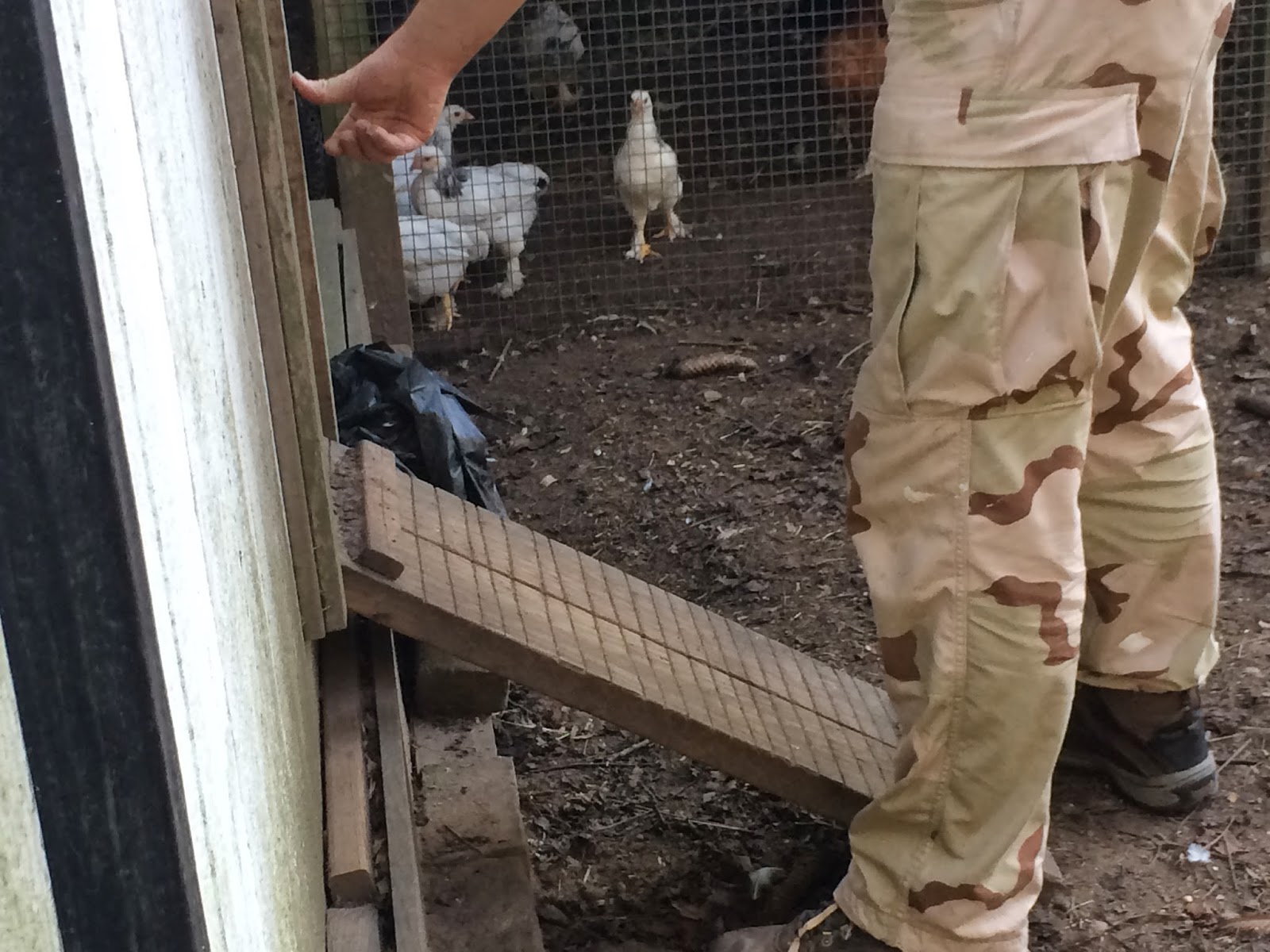 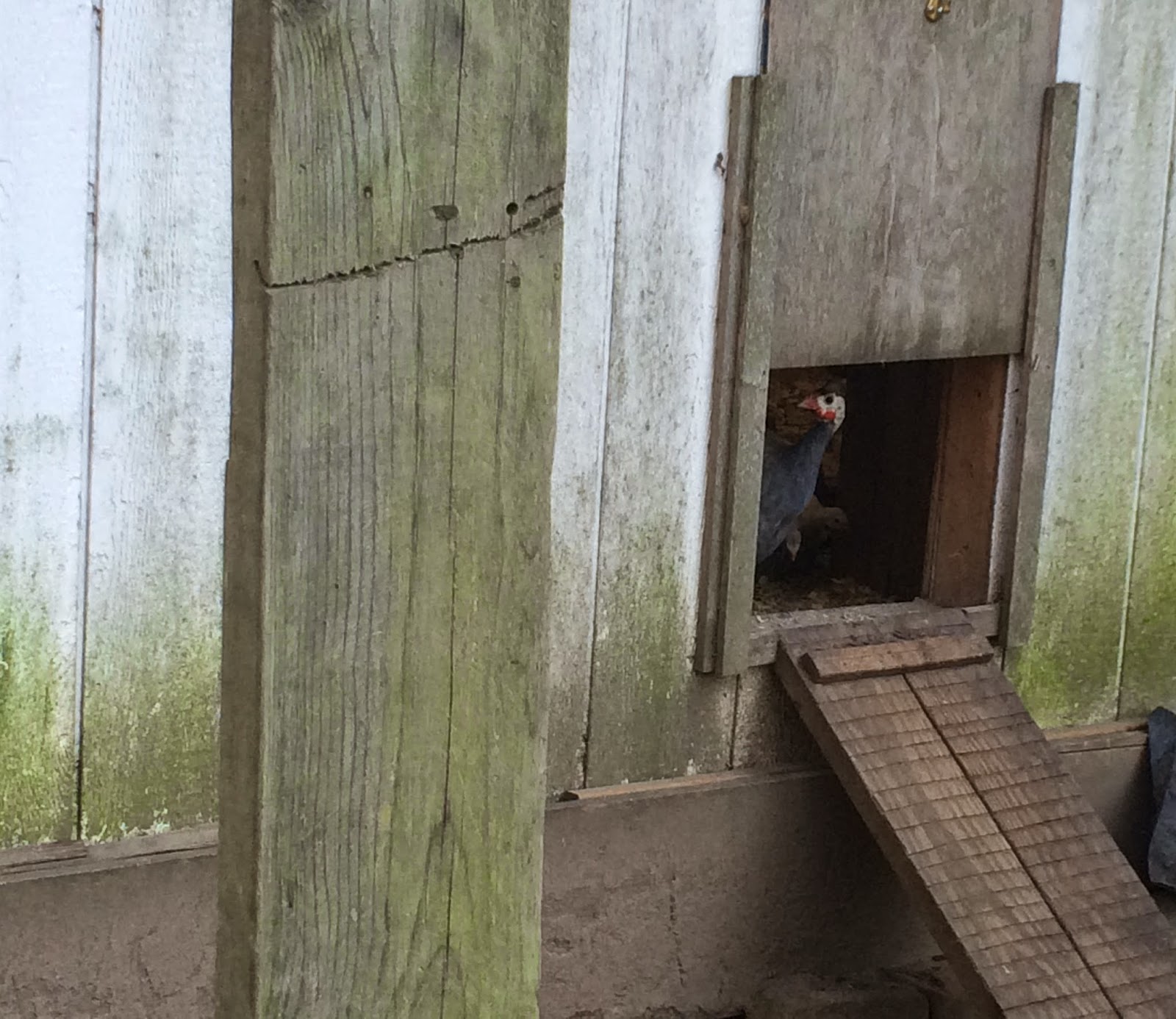 And then out she comes! 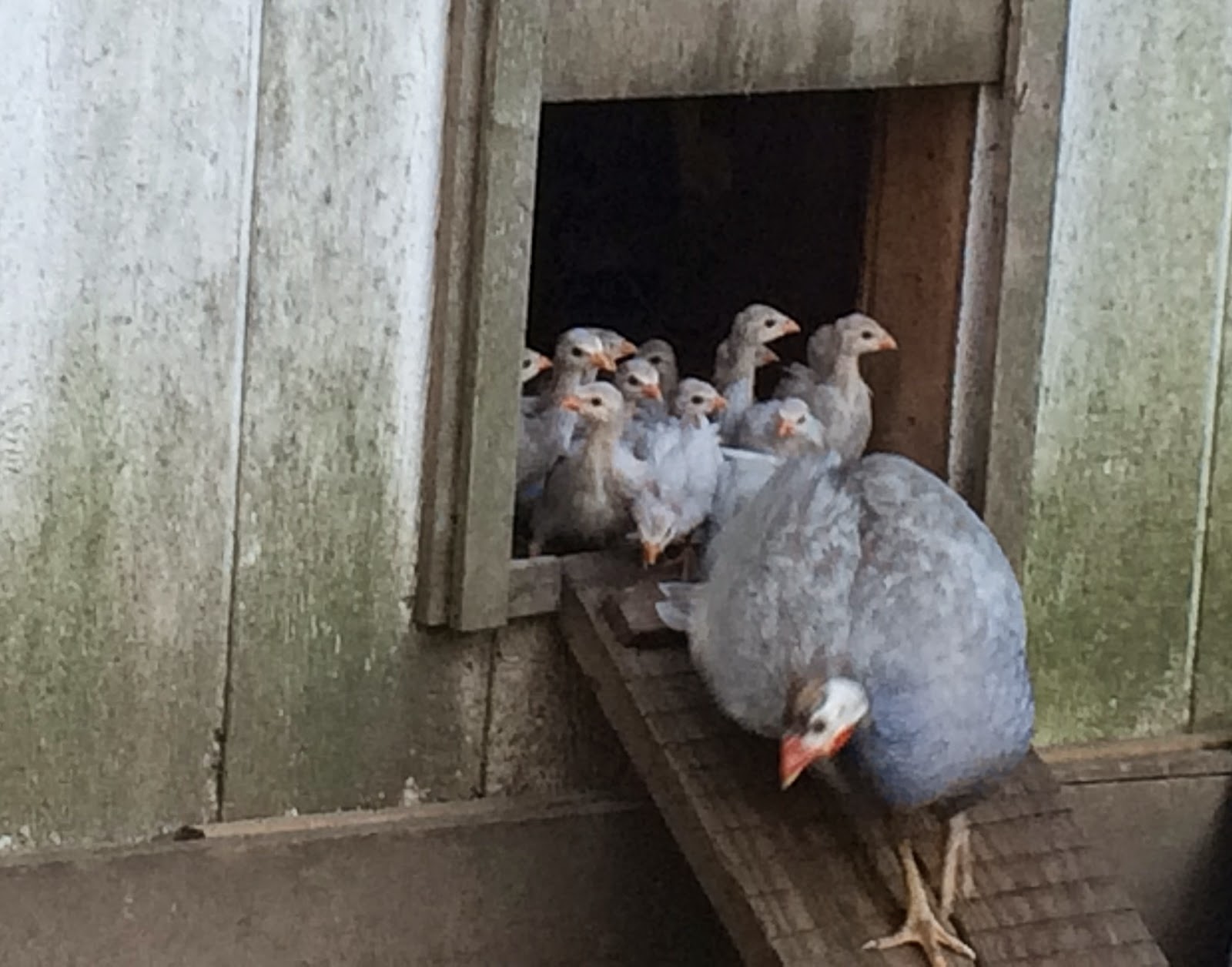 She tells the babies it's ok to come out. 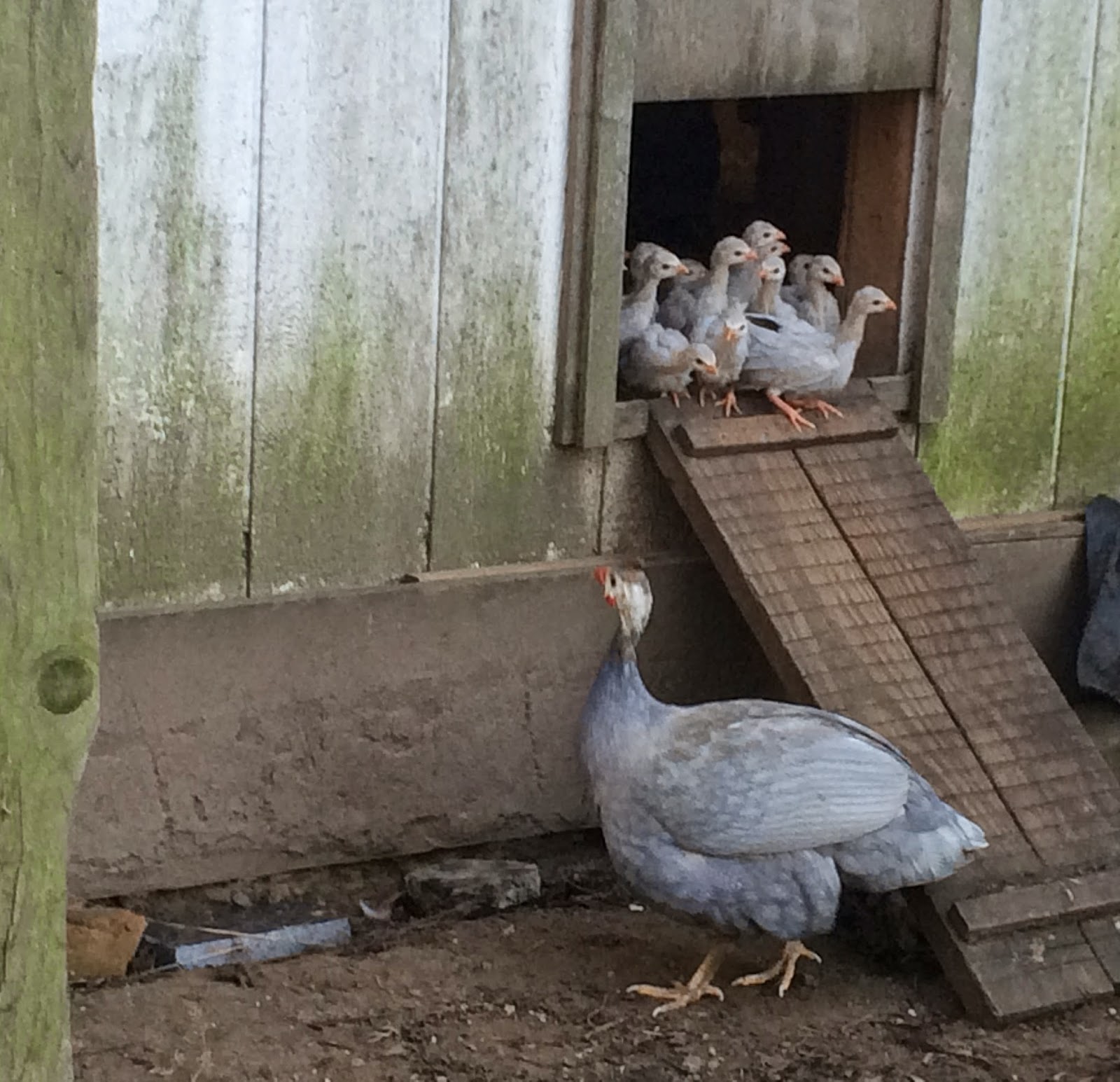 They aren't too sure about this new big world. 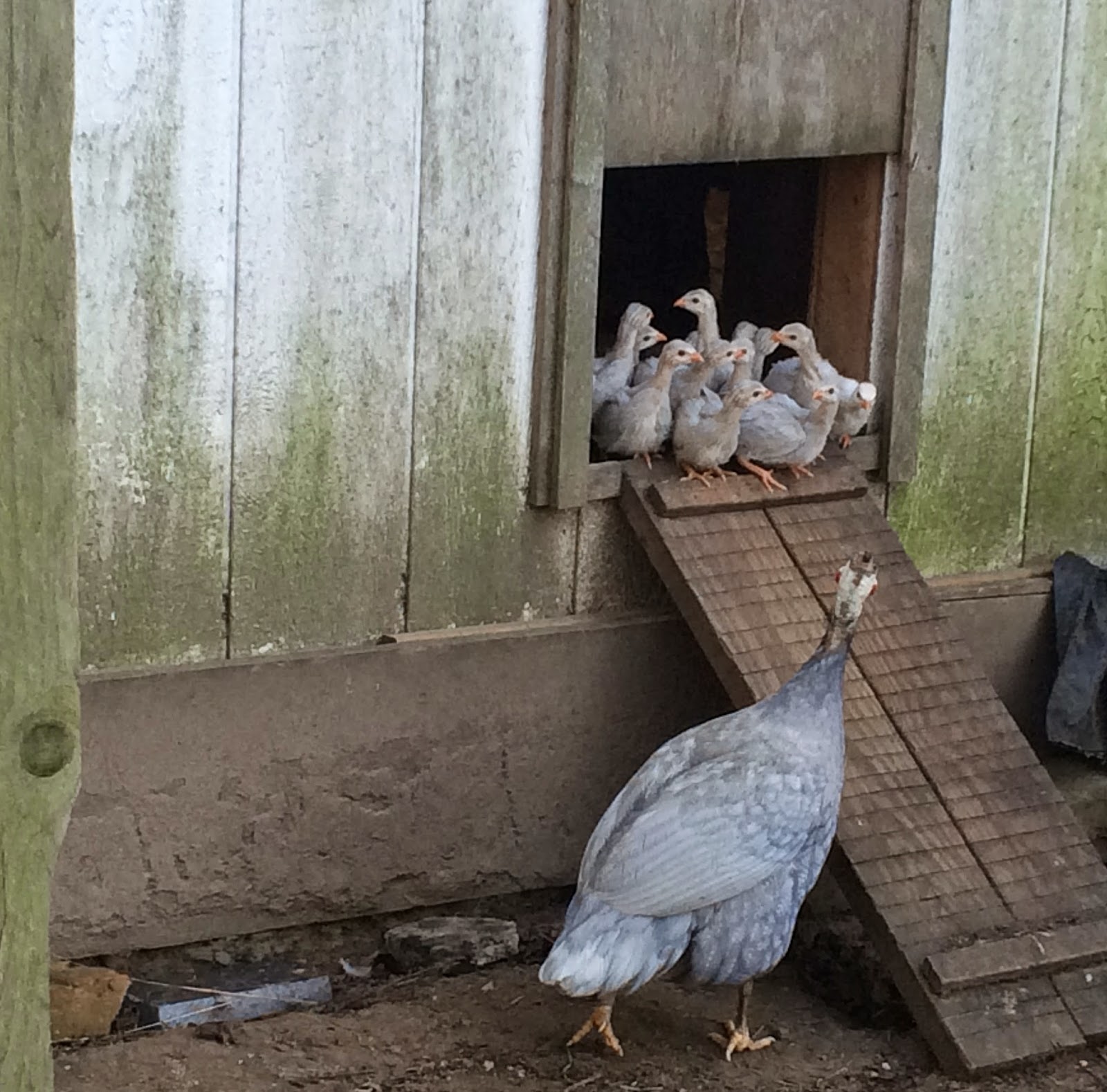 And then the keets come flying out, all excited!  They have been learning to fly inside the coop, and have been roosting in the coop rafters the past few days. 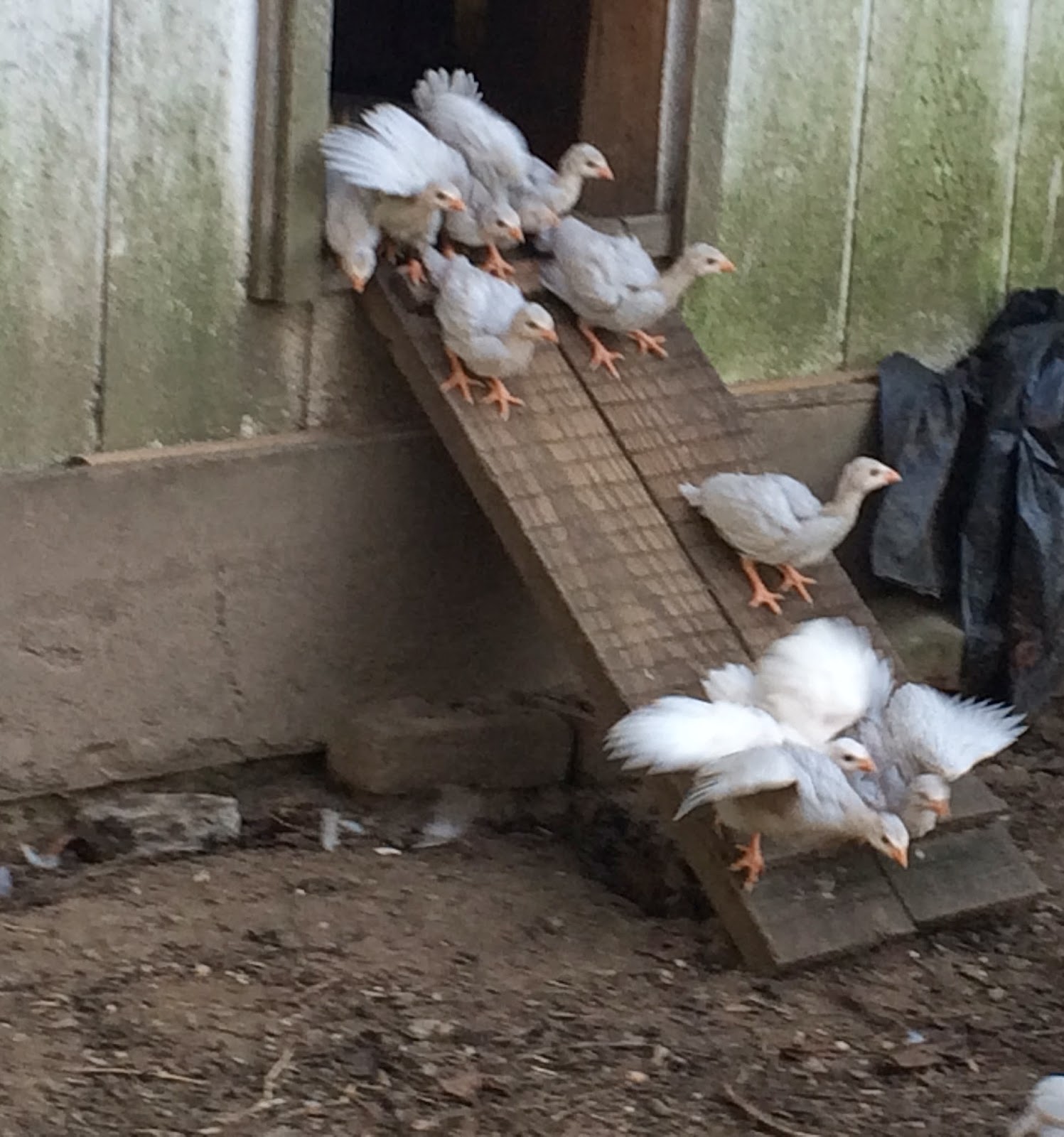 Yesterday the keets were scared of their new surroundings.  They mostly stayed huddled in a group. 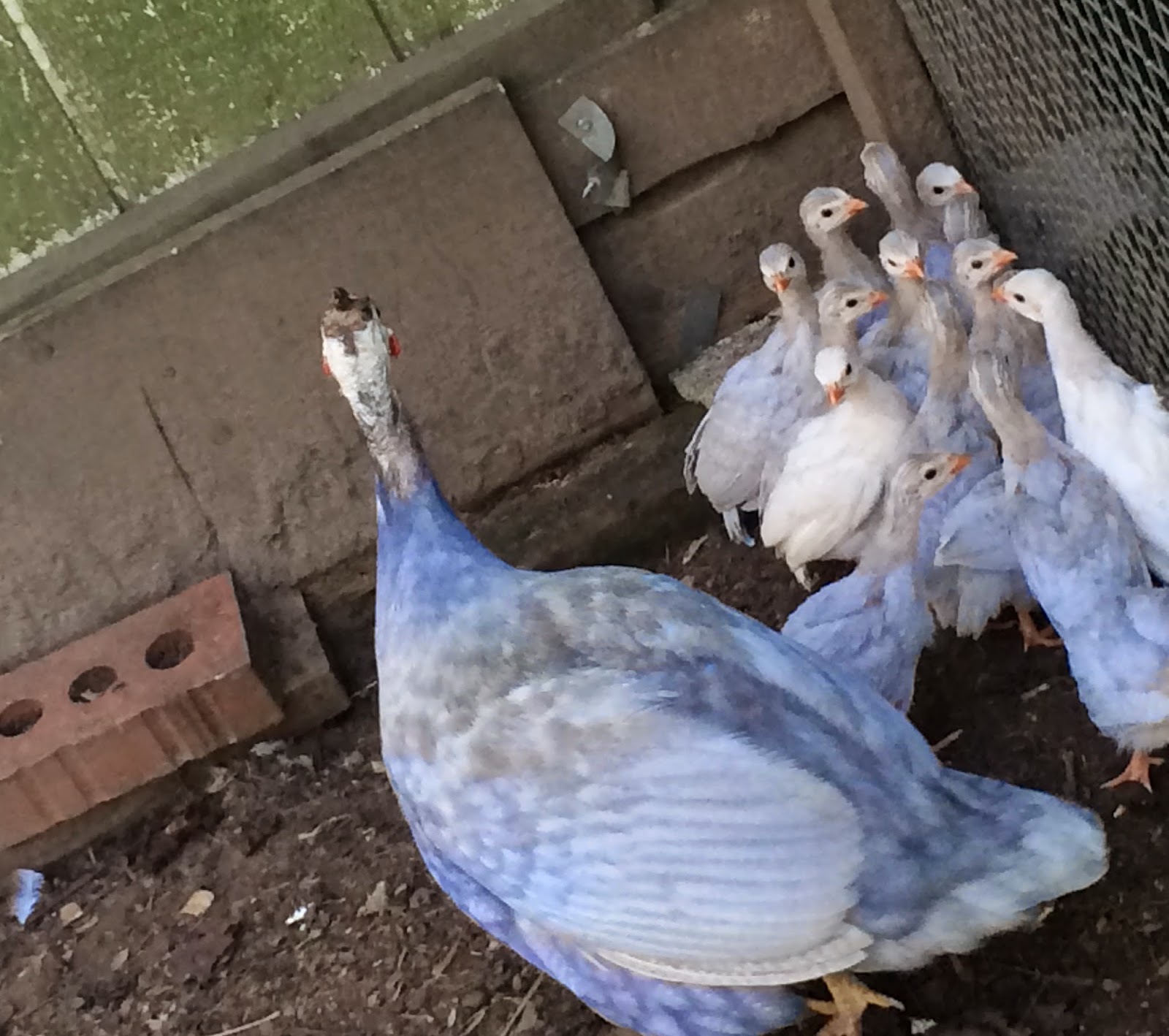 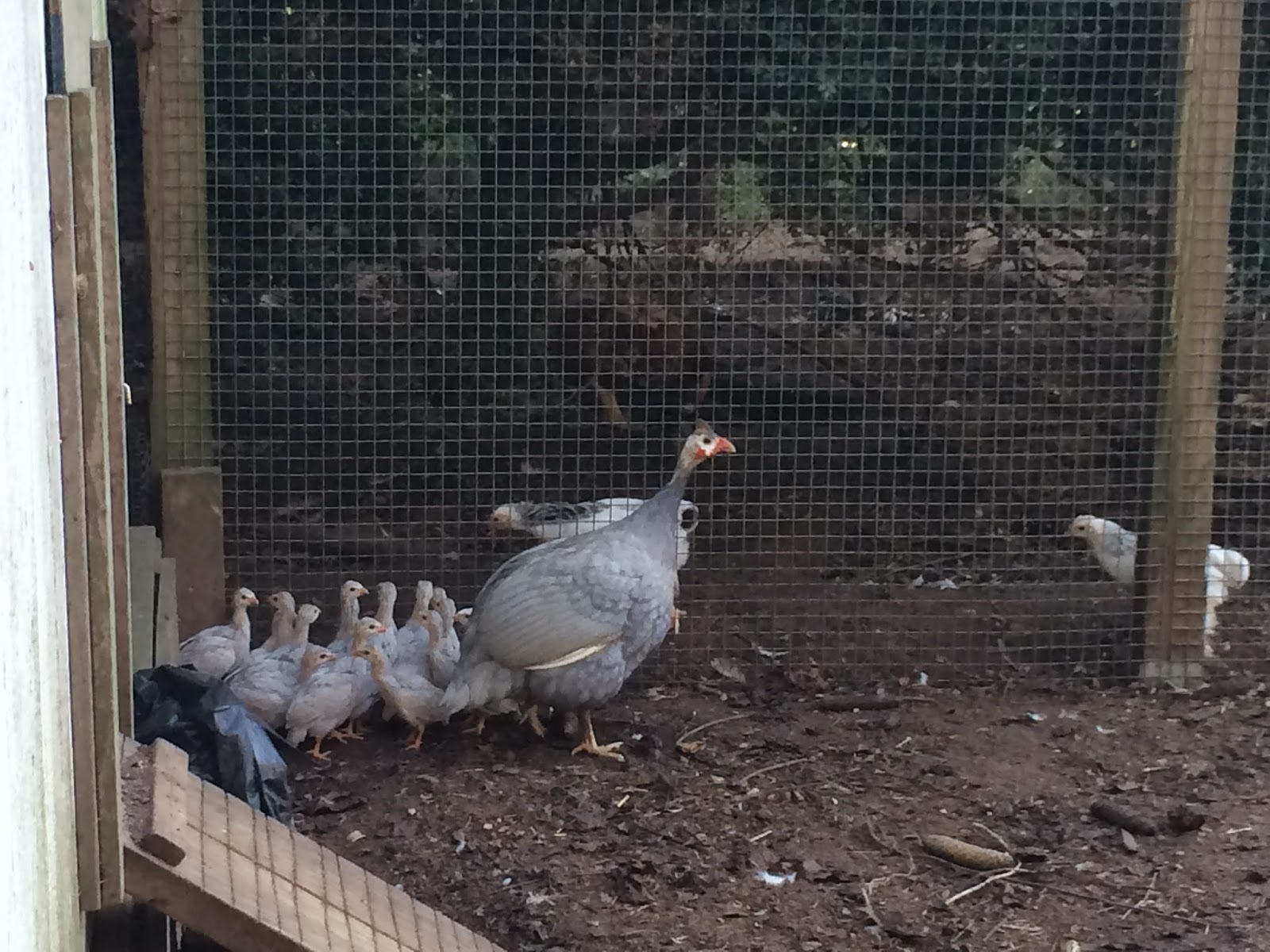 The Brahma chicks are checking out the keets through the fence. 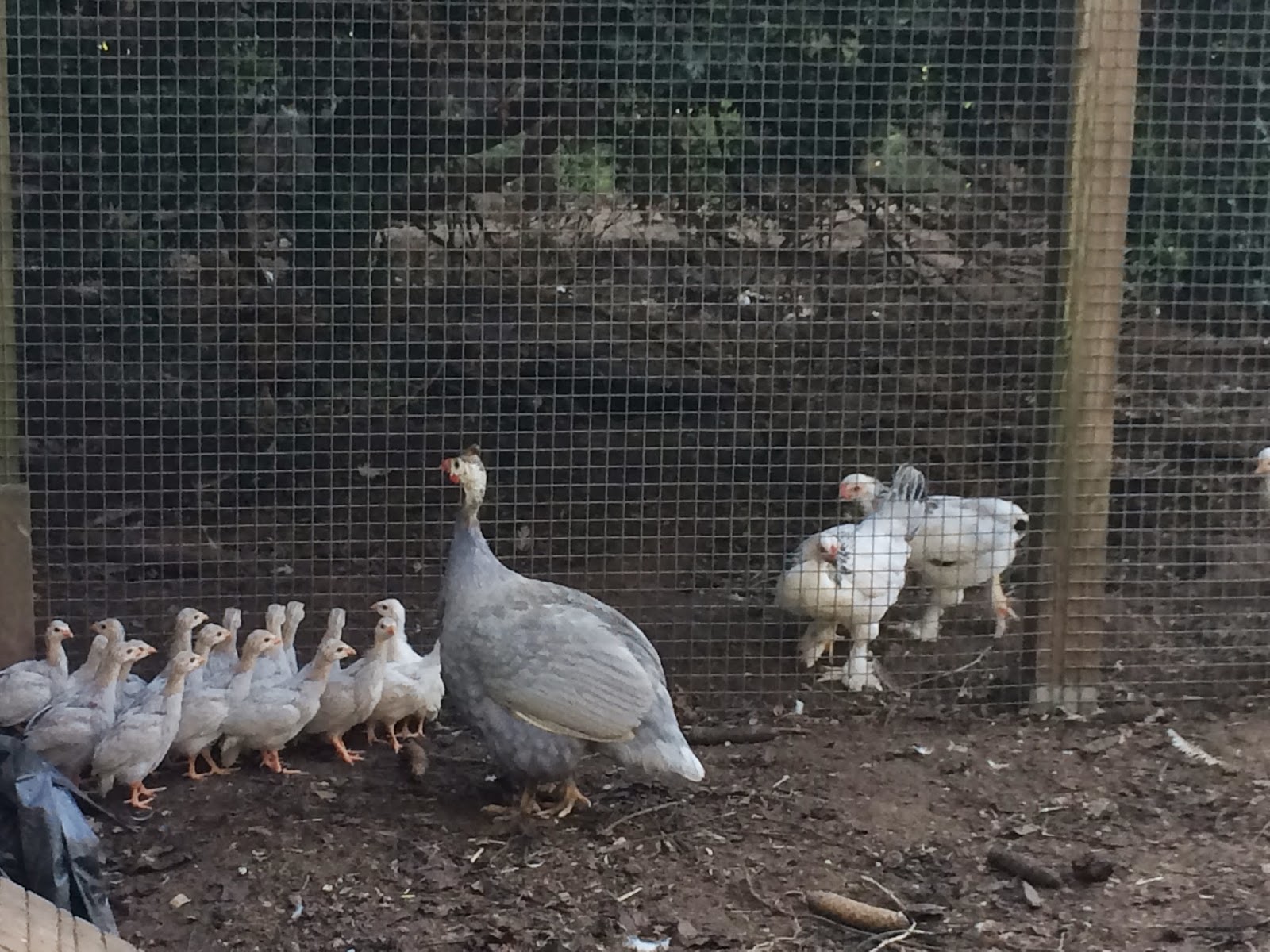 The male guineas were very excited to see the female again.  They stayed close to the guinea pen all afternoon. One of the males, the former mate, especially stayed near.  The mama guinea was so happy to be able to put her head up close to his, and they made all sorts of squeaks.  The male guineas all seem very supportive of the keets. I think they would take care of them in the wild. 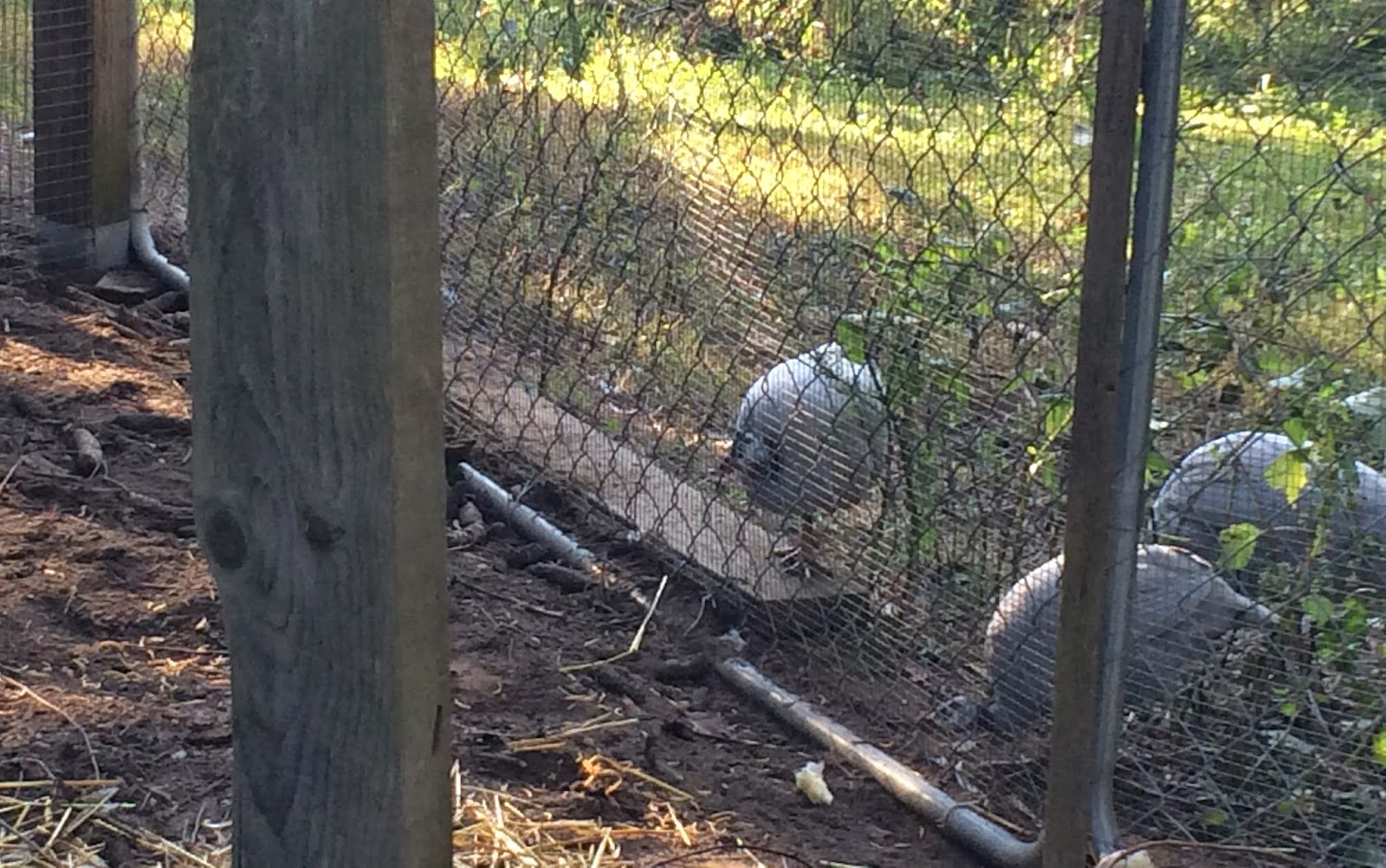 Late in the evening the female guinea hen went into the coop to sleep.  She squeaked a call to the babies to follow.  They had a tough time figuring out the ramp to go into the coop, and the mama went in and out a few times to show them.  Finally they all went inside except for 1 keet.  The sole keet started screaming a panic cry.  Mama did not come out for him, she was trying to get the other 16 situated inside.  Then the guinea male mate, who was outside the fence, made a squeaky noise, and the keet ran across the pen to him, and huddled up close to the fence trying to get close to him.  How amazing that he bonded with his mother's mate so quickly! Possibly it's his own father.  I went in and picked up the keet, who started screaming bloody-murder, and put him in the door to be with the family.  The mother came charging out, wings up in defensive mode, ready to kill me.  When she saw the keet inside she turned to take care of him, and I closed up their door and turned out the light inside and let them sleep.  The keets had a big day.

This morning the door was opened and the family is spending a second day out in the pen.  They are happy birds.  When the keets get bigger I'll let them free.  I see the adult guineas will watch out for them, and the babies can fly just fine now, so they'll be able to sleep in the trees with the adults.
at 10:16 AM

Very nice photos. Such a nice bunch. I am so glad they have a little house to live in right now. That is very interesting about the male.
Also that the baby went straight to him.
What a nice bunch of keets.

How funny that the baby ran to the male! I suppose they are a flock, and they take care of each other. I'm glad one of your hens finally got lucky and hatched some keets. How in the world do they survive in the wild?

In the farm pecking order, I've always said that the guineas are the lawyers of the bunch. They'll get you then come back and get you again to make sure you know who's boss.