Yikes  - time flies!  I have been busy with work, travel, family, etc.  I come back here to the blog and realize it's been over a month since my last post!  I'm sorry!

Things are crazy as usual here on the farm...

Randy loves chicks and chickens decided to hatch some eggs - yet again!  Yes, it's Nov.  I didn't want to have baies, but he really wanted to.  And so, the chicks are due in Dec.  We have the always-broody Charlotte sitting on the eggs.  He wanted to hatch some full-blooded Americauna chicks.  Muffin, the rooster, is Americauna.  After the autumn molt one of the hens, Virginia, who's also Americauna, started laying again.  It's been a while since she laid.  Or so Randy believes it's Virginia who's laying. I get confused now-a-days, unless I actually watch the hen lay.  All the new pullets which were hatched this year are now laying - we average a dozen eggs or more a day now!

Lucy was ill for a few weeks.  She's my favorite little bantam hen.  She's 4 years old now.  Most of the bantams from her clutch have all passed away - those little hens just don't live very long.  Lucy was getting a few drops of antibiotic water every day and was hand fed to ensure she ate every day for about a week.  Now she's doing great.  I'm happy she made a recovery - I wasn't ready for her to pass away.  She hasn't laid in over a year.  Only one of the hens from her clutch is still laying, Chloe.  Chloe lays every day.  It's just a tiny egg.  Chloe is a sweetie.

I just gave the chickens some spaghetti mixed with frozen peas.  I cook the spaghetti and throw in peas a min before I drain it.  I try to give the birds treats when I can.  I'm not home a lot - they haven't had a treat other than their regular chicken food since last weekend.  The birds all got so excited while I was feeding them - almost too excited...

While I was giving the birds the treats I took Charlotte off her nest/eggs to force her to move about for a minute.  She ran around screaming and flapping in the pen.  She immediately got in a fight with her sister, Cheryl.  Charlotte always loses the fights with Cheryl, who is very mean to Charlotte.  Charlotte ended up with a torn and bleeding wattle.  Poor girl.  She's back on the nest again.  I'll have to check on her to make sure the bleeding has stopped.  I'll put sugar on it if it hasn't stopped.

Then Muffin got in a fight with one of the other young roosters.  Muff wouldn't let the other roosters eat.  I was a fool and got between the fighting roosters.  The young cockerel ran away and took the opportunity to eat spaghetti.  Muffin raised all his neck feathers at me.  Stupidly, I raised my boot at him - which means I wanted to fight him.  The thing about Muff is that he will not stop fighting until the other bird/person loses the fight and runs away.  Then he crows announcing he's the winner.  Showing Muffin the bottom of my boot is a fighting gesture to him, I have no idea why.  To him I'm fluffing my neck feathers and standing up to fight.  He attached my boot many many times with his spurs.  He's strong and almost knocked me down, since I had to keep 1 foot up to fend him off me.  I grabbed onto a support post in the middle of the chicken pen.  I hopped on one foot, bumping into hens as they ran around eating, trying to shoo them out of my way so I could hop to the gate, all the while Muffin was attacking my raised foot.  Finally a few hens got in between Muff and I and I took the opportunity to run for the gate.  I heard him crowing as I got to the gate.  Yes, I ran, you won, Muffin.  Next time I will not get in the middle of a rooster fight.  Or I will carry my broom.

Here's a pic of Muffin raising his neck feathers - it was taken back in early Oct.  He's the black bird right in the center - it's not a clear photo. 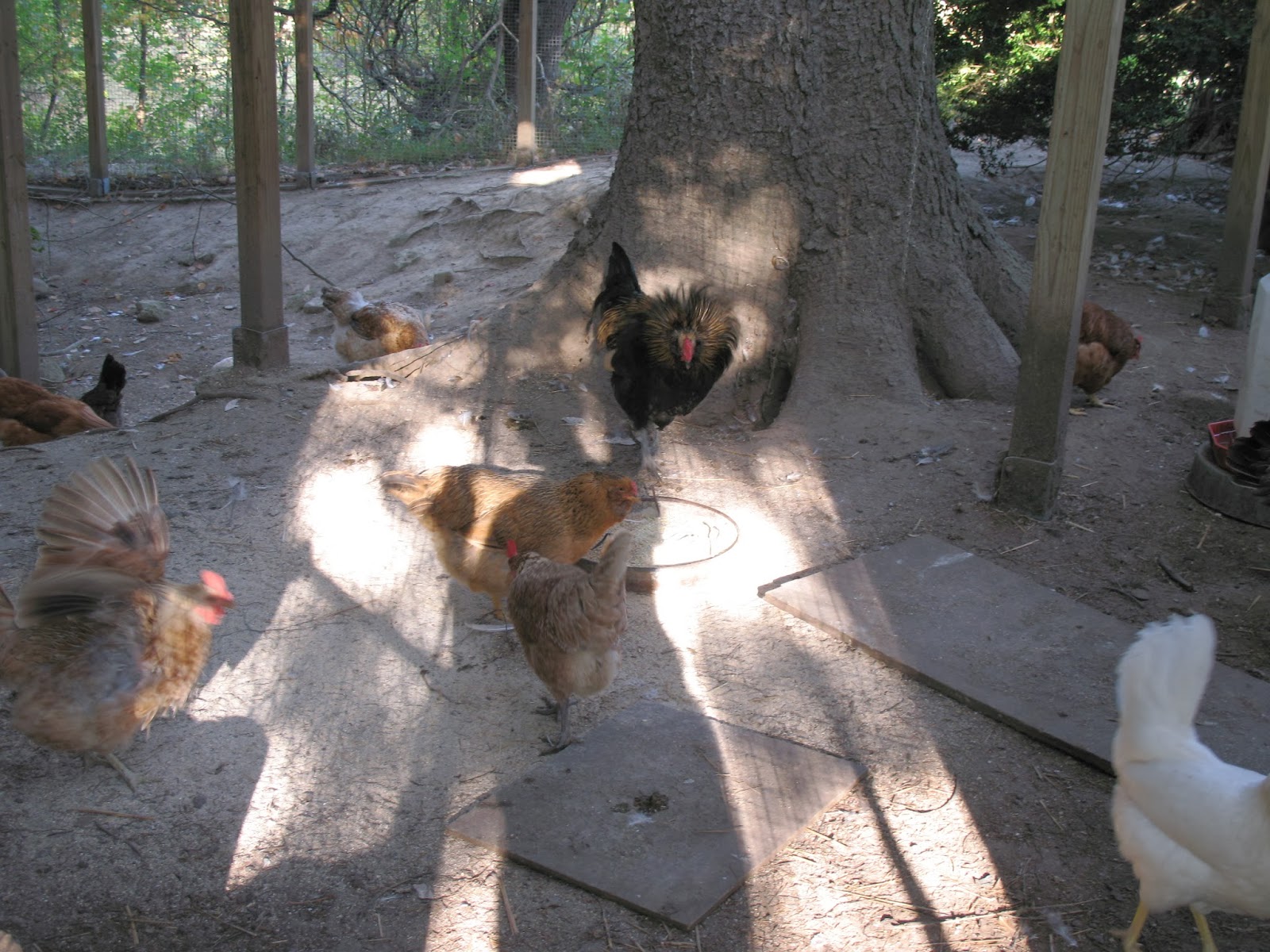 As I mentioned, the pullets and cockerels that hatched this year are so big now.  Pickles is a rooster, sadly.  He's GORGEOUS and we're considering keeping him as the second rooster, with Muff being the first rooster.  We'll see with Pickles, he has to show us he's smart.  Big Bird is also a rooster, and is extremely smart.  But he's too BIG.  Having him as a rooster would be dangerous for the hens (during mating).  The 2 black cuckoo maran/Americauna mixed pullets are still totally black with no comb.  They are beautiful.  I've never seen a jet black chicken with no comb before I saw them. 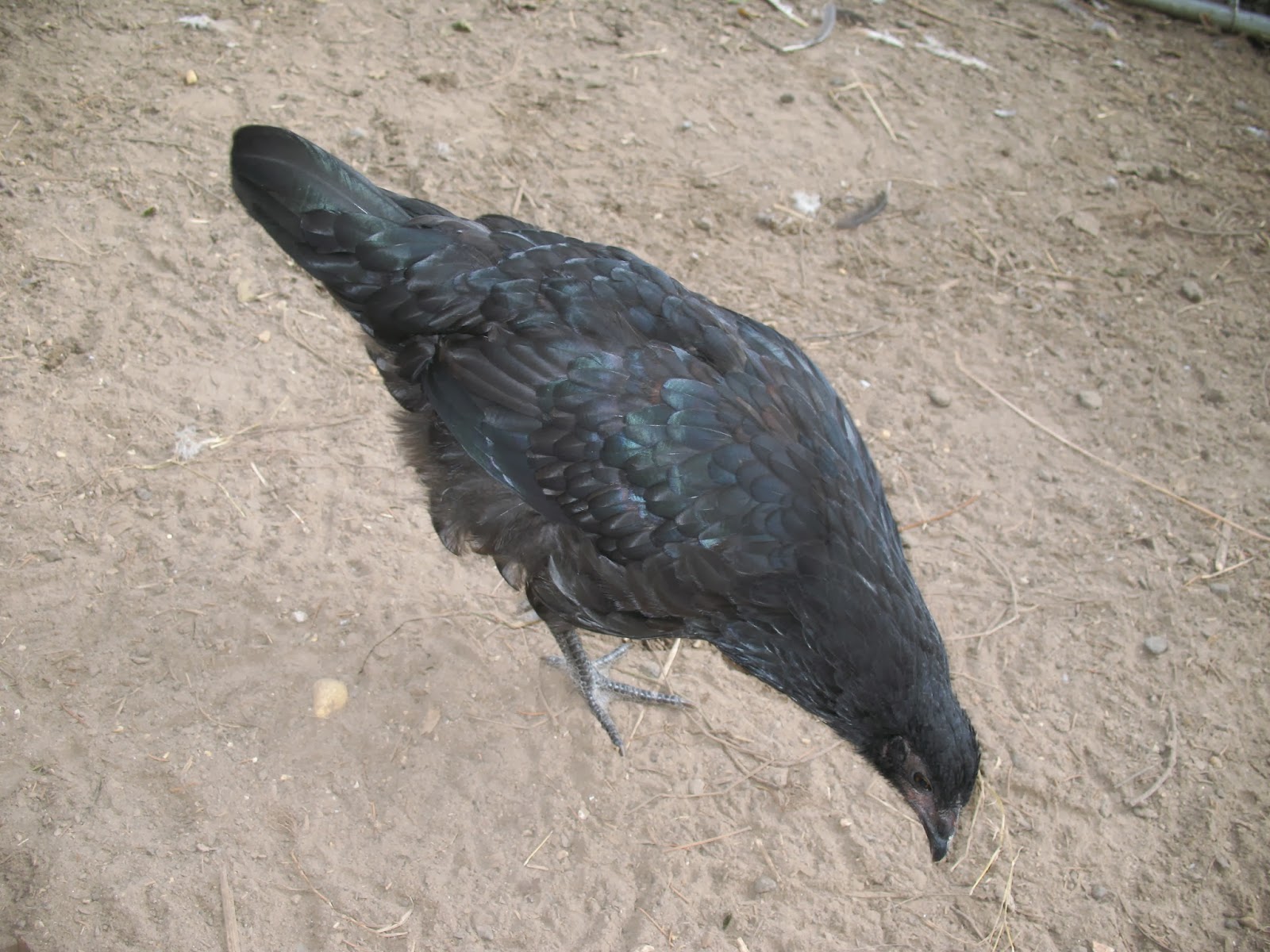 Little Red is a Rhode Island Red pullet - I love her to death.  She's a talker and never stops chattering.  I especially love her because she was a reject chick.  Pickles was a reject chick, too.  The 3rd bird from the reject chick group hasn't been named yet - she's a beautiful brown and red Americauna pullet who's VERY shy.  I have to name her real soon.