Update on travels and farm activities

I have been away on travel for my job recently, just returned last night.  Guess where I went?  I wont keep you guessing this time...  The following info is from a quick Wikipedia check, along with photos that I took.

Here's Zoltar the fortune teller, made famous in the Big movie.  But this one wasn't in NJ like in the movie, it was on the Venice Pier in Venice, Los Angeles, CA. 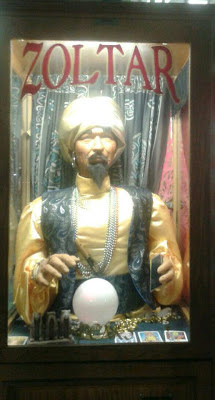 Venice is a beachfront neighborhood on the Westside of Los Angeles, California. It is known for its canals, beaches and circus-like Ocean Front Walk, a two-and-a-half mile pedestrian-only promenade that features performers, fortune-tellers, artists, and vendors. Venice was home to some of Los Angeles' early beat poets and artists and has served as an important cultural center of the city. 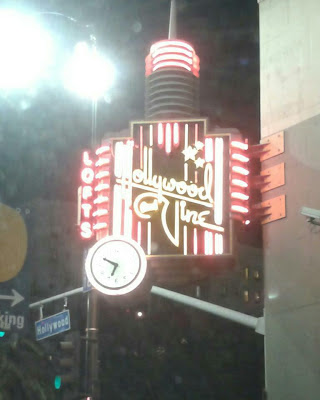 The Hollywood Walk of Fame consists of more than 2,400 five-pointed terrazzo and brass stars embedded in the sidewalks along fifteen blocks of Hollywood Boulevard and three blocks of Vine Street in Hollywood, California. The stars are permanent public monuments to achievement in the entertainment industry, bearing the names of a mix of actors, musicians, directors, producers, musical and theatrical groups, fictional characters, and others. 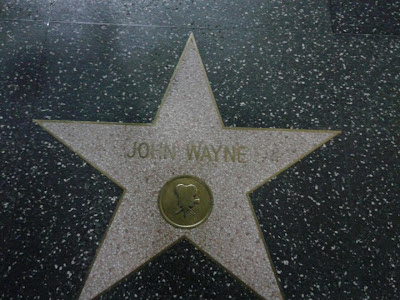 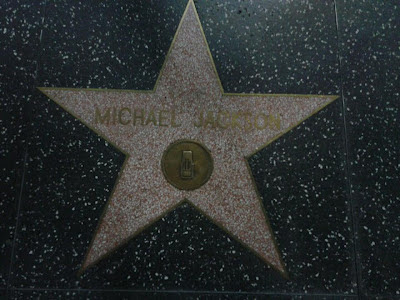 I have more photos, but I wont bore you with all the Hollywood glitz.  It was a fun trip, but alas, now I'm back on the farm, where nothing slows down just for a second.
~~~~~~~~
Latest news: FOUR, yes 4, of our dark colored baby guineas have been killed by what we believe is a a Northern Goshawk.  We now have 14 baby guineas and 5 adults.  Some of the babies are as big as adults now.  The Northern Goshawk is a type of hawk, and very sadly, is listed as endangered in the state of Maryland.  Randy finally saw the hawk this morning hunting the smaller guineas.  It only kills the smaller ones and takes away their bodies, it does not eat on site.  I don't know what to do about this situation.
On yet another sad note, our stray cat named Tommy hasn't been sighted in 4 days.  He used to eat at our house twice a day every day.  Now we only have Benjamin and Brindle and occasionally Jerry visit, who are all stray cats.  Tommy was my favorite outside cat, he was so sweet and calm and loved to be pet and sit in laps.  I was planning on finding a home for him before winter, as he would have made a great housecat.
Here are some photos I took last June of Brindle and Tommy drinking milk and Tommy in the yard.  I miss that TommyCat.  He is tall and slender, has an Egyptian cat face.  I thought he was beautiful. 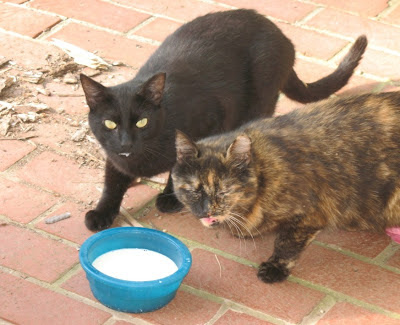 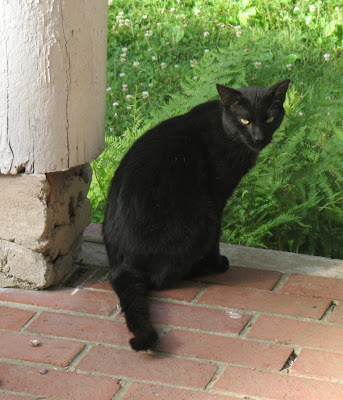 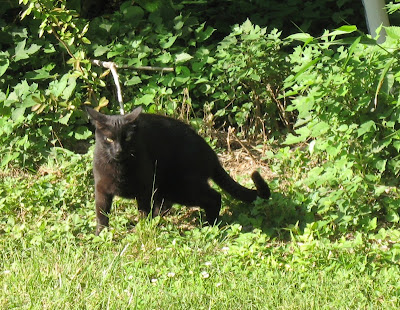 Chloe the hen isn't acting right, she's been standing off by herself.  Our hens are getting older and I don't expect a few of the older ones to make it through the winter this year.  I'll have to give Chloe some extra treats tonight.
And to attempt to end this post on a cheerful note...This afternoon I was out with the chickens and I had a Diet Pepsi can in my hand.  All the hens begged to peck the shiny can.  And then, although I knew I shouldn't, I poured some diet Pepsi on the ground and made a small puddle of Pepsi. All the hens had to taste it, and they all ran off shaking their heads in disgust.  Except for Penny, the former house hen.  She gobbled the Diet Pepsi, she couldn't get enough of it.  She wasn't able to drink much before it was absorbed into the ground, but she loved what little taste she got.  She's such a goofball.  Maybe her former owners fed her soda, as she was a house hen, after all.  Who knows with her, I bet she lived off McDonald's scraps and Pepsi.  She lived in the city in someone's house in her former life and even still she prefers to be inside the house with me than outside with the other chickens.  Silly bird.
at 3:24 PM

If Tommy is intact I suspect he ha's joined the online cat of your dreams website and is out having fun.

Oh wow, what a lot's been going on! That's too bad about the hawk eating the guineas. It's like the joke about, "What do you do if you see an endangered animal eating an endangered plant?"

Your Hollywood trip sounds really interesting. I live in Cali and I've never been down there. :-)

Wow you were in California? Now nice. I am not a big fan of L.A. so we don't go down there much. There is lots to see though.
I am glad you had a nice time I am sorry about your babies. Hawks are coming in now and landing on my chicken coop.
I think your kitty might be back. He is a boy and boys do like to wander.
I thought the diet pepsi thing was so funny, silly hen. I have lost 4 hens this summer. I only have three left of my original flock. I might have to get chicks next year.

I truly find this a interesting subject. Never looked at this subject in this manner. If you are planning to create more articles relating to this subject, I definitely will be back in the near future!

Ah, life in the country . . . you just never know what's gonna happen from day to day ... depending on what "natural" critters there may be in the woods. So sorry about your baby guineas, and I sure hope Tommy comes home. Having grown up in So Cal I know what attracts folks however it's also a great place to be FROM. We love living in the country now that we're retired from the rat race lifestyle in So Cal.