Penny the former house chicken is doing fine. She gets along fine with all the other chickens. She has no problem standing side-by-side with them when I give them treats. She still lays an egg every single day, has never skipped even one day. She comes running right to me when I go out to the chicken pen, begging me to pick her up. She's used to attention. And I spoil her. I pick her up and bring her into the kitchen when I have time, which makes her very happy. She looks at everything on the floor to determine if it's edible. If it was up to her she'd live in the house without any other chickens.
The new shelter hen, who still is nameless, is also doing fine.  I call her Big Girl.  Surprisingly, she appears to have lost some weight in the past week since she's lived with us.  She's been locked in the infirmary coop; we haven't let her loose with the other chickens because we wanted to ensure she was healthy first.  She had a very hard time walking when we got her.  She would only take a few steps before she had to stop.  But now she's walking normally all over her coop.  She's now able to jump up into nestboxes.  But she has not laid even one egg.  I gave her another chicken's egg, which made her very happy.  She looked and looked at it, turning her head around to look at it with the other eye.  She made happy chicken sounds when she was looking at the egg.  I put a couple plastic eggs in the nestbox that she sits in every day to encourage her to lay.  Maybe she's too old to lay?  Maybe that's why her former owners let her loose into the city streets?  She has learned to eat chicken food.  The first couple days she wouldn't eat, but now she eats just fine.


﻿
We bring in other birds to visit the shelter hen.  One of our hens, Virginia, really gets along with the new girl just fine, so Virginia has spent a few days in the coop with her.  We are planning on putting the new hen into the coop tonight to roost with all the chickens, and letting her live with the other chickens starting tomorrow.  I'll have to keep a close eye on her to ensure she isn't picked on too much and I'm sure I'll have to assist her with the chicken proceedings, like how to leave the coop out the little chicken door in the mornings and how to come back into the coop in the evenings.  And then we'll have to work out an overnight roost spot for the new girl.

﻿
Every chicken has a specific spot where they like to roost at night.  We have roosting posts put up in the chicken coop where all the chickens sleeps.  Muffin the lead rooster calls everyone into the coop when the sun goes down, and everyone gets onto their roost spot.  Only Penny stays out until the last minute, rushing into the coop after it's already dark outside.  Penny had a tough time picking out her own spot on her first night in the coop, I had to choose a roost spot for her, and she still always sleeps in that same spot.  Penny is such a good girl - she appears to be so smart, repeating what I show her immediately.  Hopefully it all goes as smooth for the new hen.

While I was outside taking these photos of the chickens the adult guineas came running to greet me, so I had to photograph at least one of them.  This is our white male guinea. 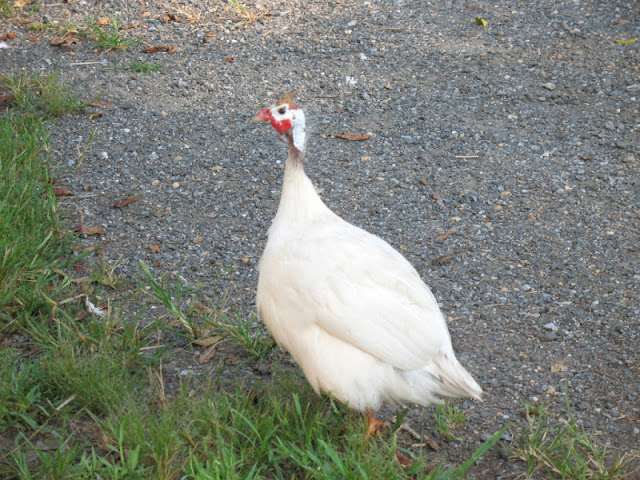 At last but not least, here's Benji, who followed me to the chicken coop.  He was watching over my actions and watching over the guineas and chickens, as he the lead farm cat around here now.  When I took this photo Benji was watching the white guinea.  The guineas like to chase Benji.  They chase everything.  They even try to chase me.  Benji waits until the last second to run from the guineas.  As soon as I walked away the white guinea chased Benji and Benji ran up to the house beside me. 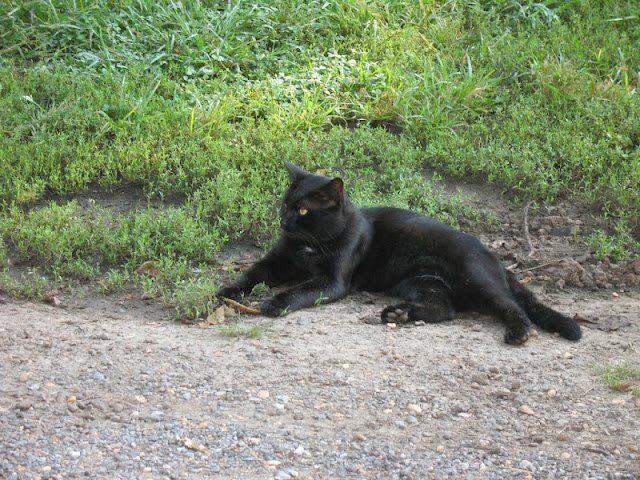 Glad all the poultry seem to be getting along. Good luck with NC (new chicken) and her first night with the others.

And of course, no totally-poultry post would be complete without a picture of a kitty!

Thanks for the update. It looks like New Chicken will be getting along fine with her new family. And I'm glad Benji keeps things in order and has been promoted to lead farm cat even though the guineas still bug him! Have a great weekend and good luck to New Chicken find her place in the pecking order.

I thoroughly enjoyed the update. I like reading about your odd ball little adoptees. I am so glad they are doing as well as they are now. It sure makes for interesting stories. Your white guinea looks so handsome now and Benjy looks good too. Such a nice group of animals.

I just love hearing about your adopted chickens! Heck, all of the bunch. How're the new baby guineas doing? Have they been let outside yet?

I LOVE Benji!! And I love your house chicken too!

I stopped by to thank you for your visit to Mucky Boots, and I'm glad I did! What an entertaining crew you have!

I am always so grateful for people like you who are willing to help out animals in need. So thank you!

Have a great weekend!

Everyone is looking great. Benji is so handsome!