Last week Randy and I visited New York City.  I had a blast and thought I'd share some of the photos I took.  I totally was a tourist, snapping photos everywhere.  I may live in the country, but I love the city, any city, every city.  We parked in Times Square and took to the street on foot. 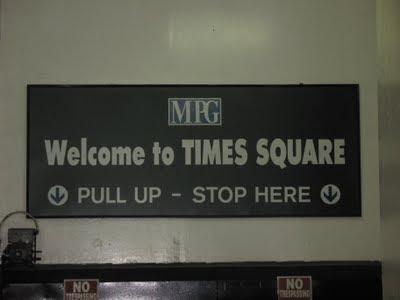 I thought the building below was very pretty.  Don't know what it was. 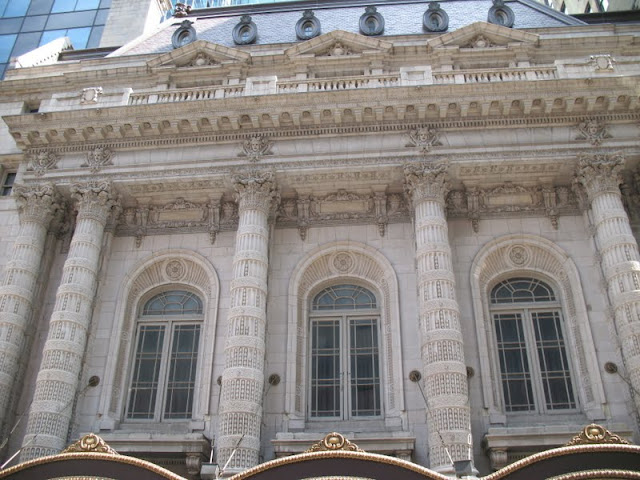 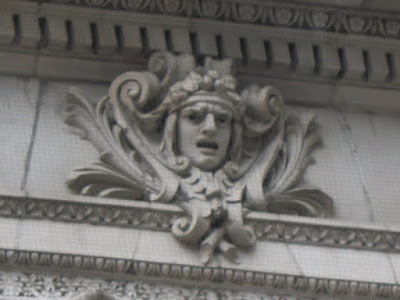 The billboards were amazing!  There are no billboards allowed in Washington DC, so I'm not used to them. 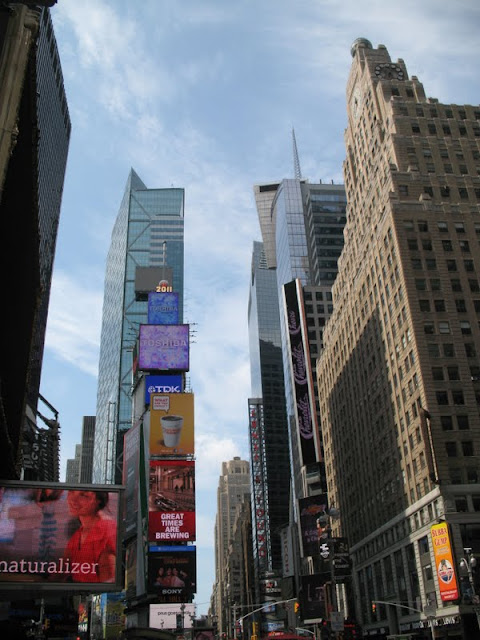 The people...there were so many people! 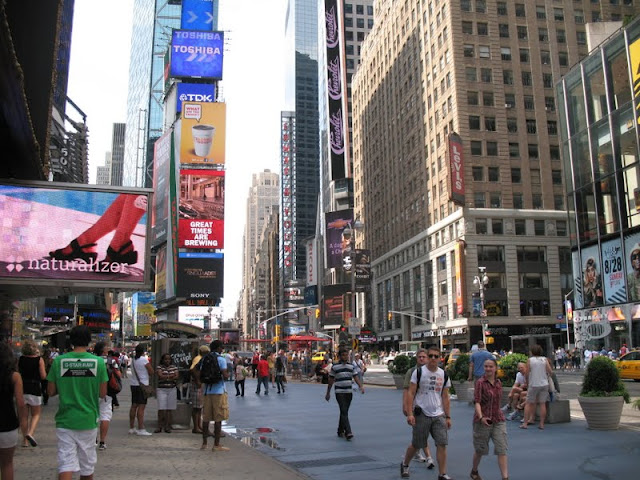 I call this man "Metal Man".  He was painted silver and looked like a statue.  He was great!  But he wasn't too happy when anyone snapped a photo and didn't put some money in his pail! 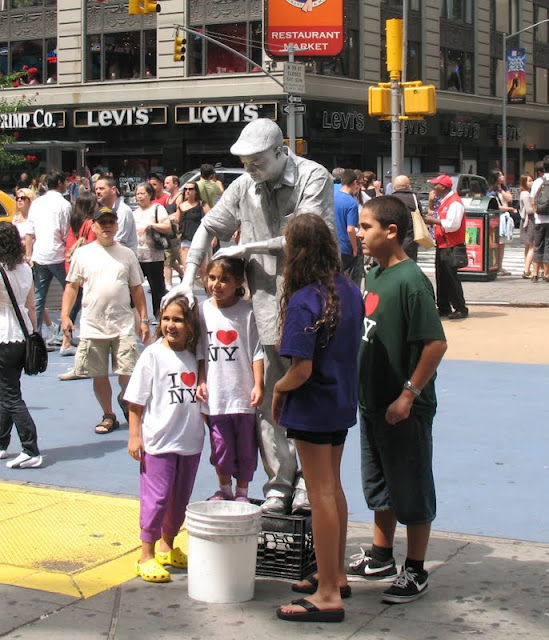 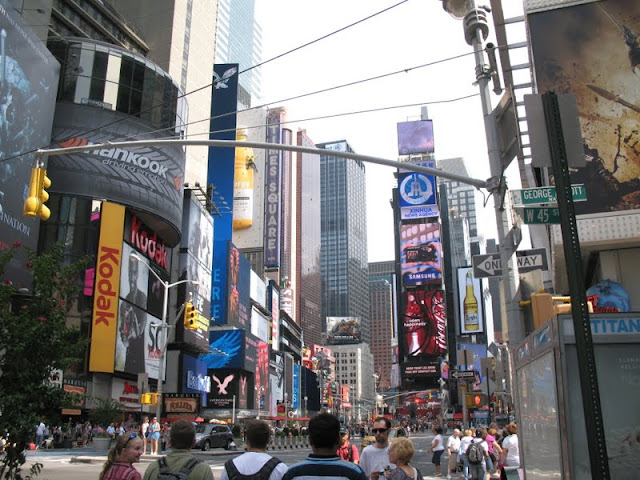 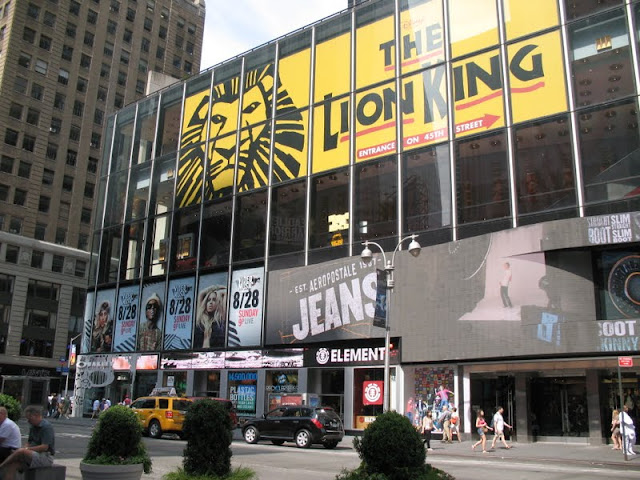 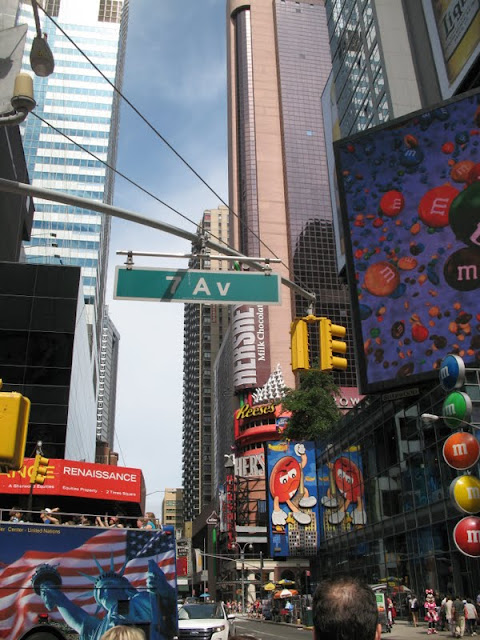 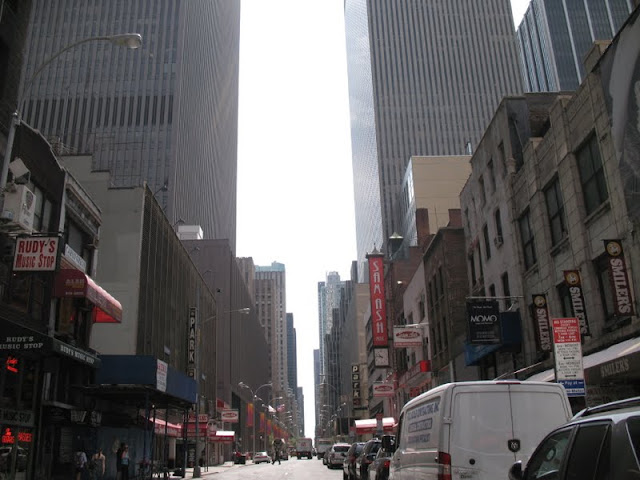 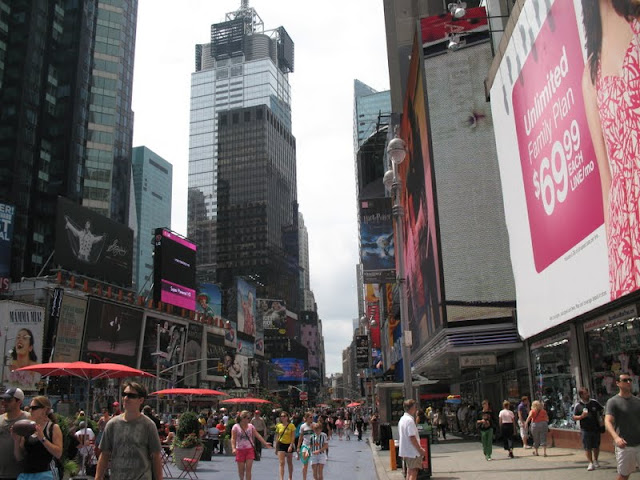 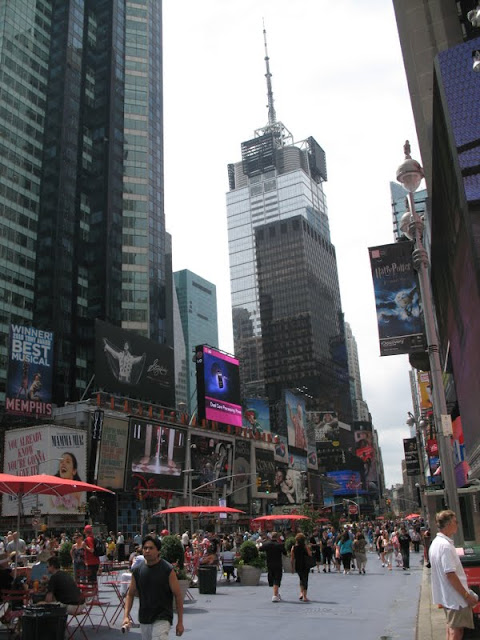 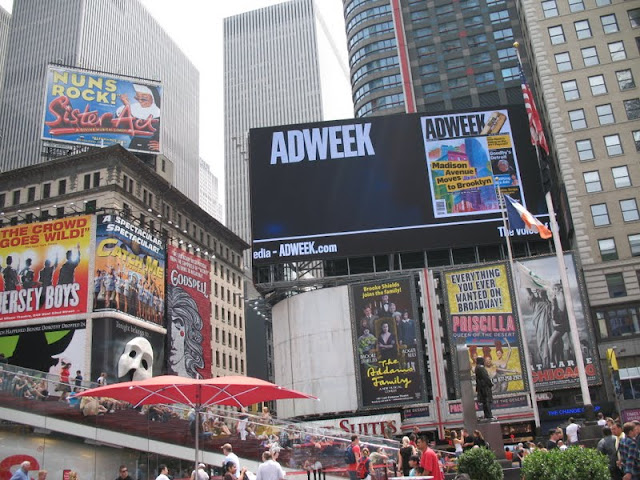 Here's a street band.  They were great! 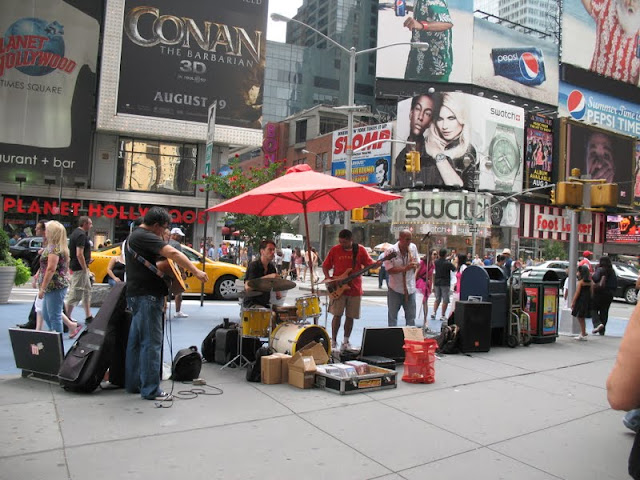 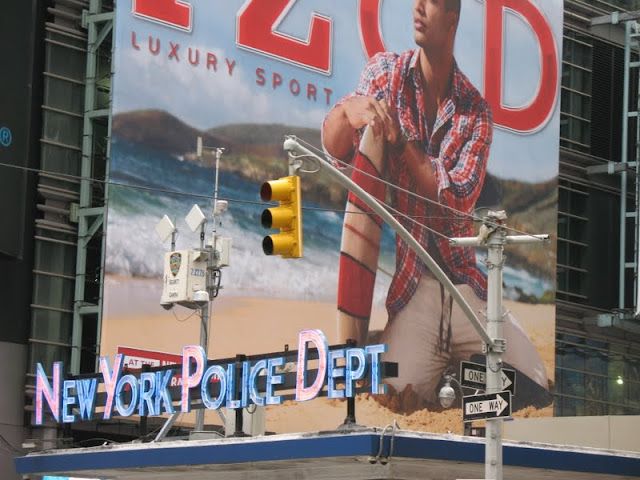 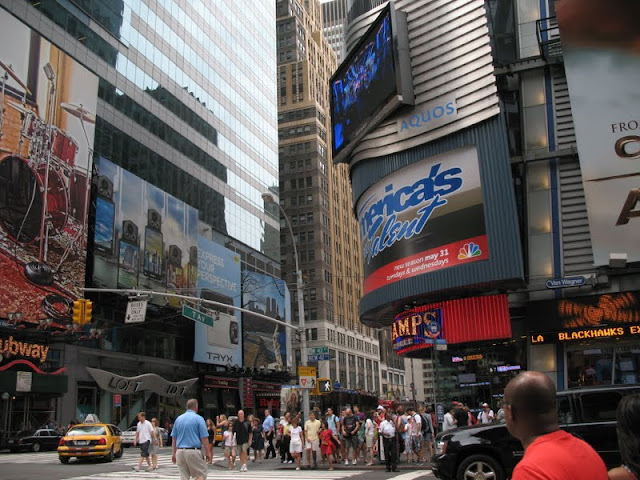 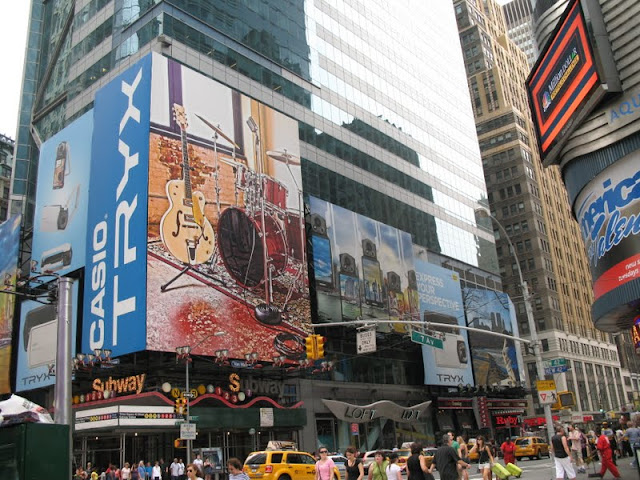 Hhere's a hot dog vendor.  I wanted a hot dog, even though I wasn't hungry, just to have a hot dog from the streets of NY! 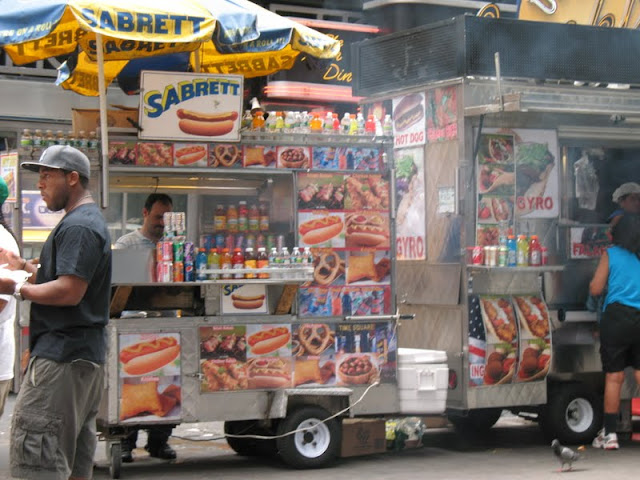 Great pictures, thanks for sharing! I've been there twice. It's so overwhelming and awesome all at the same time!

If I ever get a chance to see NYC, I'd be like you with camera in hand. It would be fun and I'd be awe-struck ... but I'd be so thankful to be back to the quiet and peace of my home in the country. Can you imagine living in such chaos? Not for me. But thanks for all the pictures. I hope you had fun. How was that hot dog?

Loved all the pictures. I would have been just like you, Lynn, camera in hand and eating hotdogs from the vendor Never been to NYC. One of these days m I want to see a play on Broadway and go to the Rainbow Room.

I LOVE NYC, and I can take or leave cities. But New YOrk is great. I've been twice and want to go back for more. Luckily we have friends who live there and we get free accomodations when we visit. :) Looks like you had a great time.

I have been there once and I so want to go back. I loved it so much, even though I am a country girl at heart.:)

love the city
been there a dozen times... and would go another dozen

Hi! I love your blog, and would love you to follow mine at: www.outsidetheboxandbeyondthefarm.blogspot.com!

Wow that does look exciting. Here I was thinking that on our trip to DC we would probably skip New York just because there would be too many things to do there. Time limits and all... :)

Hi! New follower! Absolutly love your blog! We have some friends that live in Freeport? Never been myself, husband said he's been with a trucking company he worked for and said it was packed! LoL...

Looks like fun. Metal man was cool! ~ I didn't know there were no bill boards allowed in DC. Interesting. Why aren't they allowed? Does NYC have the murals painted on the buildings like Philly?

Get that internet fixed! I need a guinea hen update. ;)

Wow! You must really love New York! When are you coming home? I miss you guys!

Hey Lynn- I finally got my blog updated! I miss yours! I know your computer is down, so I look forward to all the updates when it's up and running again! Happy fall!

Missthesea - It is an awesome place. So different than my farm, that's for sure!

CAGrammy - it's fun to be a tourist sometimes. I think I'd like to live in the city sometimes, only because there's no farmwork needing to be done!!

Robin - When are you an Lee coming to DC??????? Do you wanna meet for a drink or dinner or just to say hi if you have time??? I've met quite a few bloggers in real life, and they weren't psycho or anything! :) I don't think I'm psycho!!

A Mom IM- Welcome to the Corner!!!! Nice to hear from you!!! I'm sorry I've been gone for so long! But now I'm back and look forward to talking with you! :)Barb - NYC has everything digital - huge digital billboards that are constantly moving, changing.

Benita - Lol, I wish I was in NYC all that time! I was home, just had no internet!

Lynn we would love to. We are going to be in DC in March. I will let you know more when we get some more of our travel plans ironed out.