This morning before the sun rose the Guineas were warning us of danger.  They were making their loud obnoxious Guinea noises.  They sleep up in a tall, huge pine tree over the chicken pen at night time.  This morning, little to our knowledge, a large skunk started prowling around the chicken pen, trying to find a way in.  The Guineas saw and started screaming.  Good watch-Guineas.
Randy went out to see what was going on and walked up on the skunk as he (the skunk) attempted to enter the chicken pen.  Randy was putting out chicken food for the day.  The skunk and Randy took a good long look at each other.  The chickens were locked up in the pen.  The skunk was on the outside of the pen.
The Guineas all flew to the ground outside of the chicken pen at that time, screaming bloody murder.  There was so much noise going on, so I went outside to see what was happening .  As I watched, the skunk attacked one of the Guineas who was nearby on the ground.  The Guinea got sprayed by the skunk.  The Guinea then got confused and attacked the outside cat, Jerry.  Jerry was up on our front porch observing and eating his breakfast when a large, stinky, screaming Guinea fowl came running at him, wings up in attack mode.  Poor Jerry- he ran for his life and hasn't returned yet.  He never finished his breakfast.
Randy killed the skunk.  It had to be done.  It was done quickly.  The skunk smelled so very bad, worse than I have ever imaged it could smell.  I guess I never was around a skunk up close and personal before.  He and I cleaned up the area and locked all the Guineas up with the chickens for the day.  They deserved a day of rest with the chickens.  Randy and I both smelled of skunk all day.  My co-workers in the office didn't appreciate me today.  The yard still smells.  I'm sure the one Guinea fowl still smells.  Everything around here smells now.
And all this happened before 7am this morning.  Happy Friday! 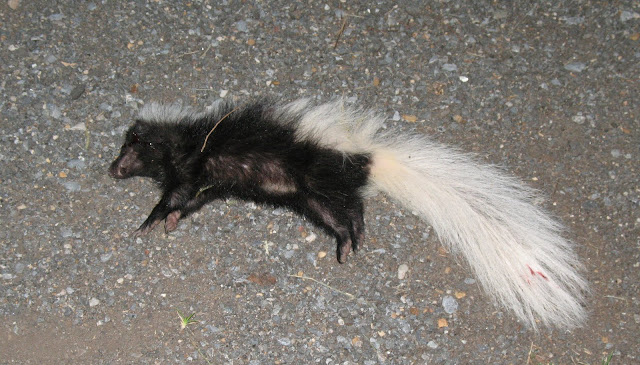 The health department will have it checked for rabies, they must have the head...call them.

That thing must have been starving. At least you don't have to worry about it coming back.

NOW: Time to catch a guinea(works for people too).
1/2 bucket of water, mix in 1 quart(2 bottles) of 3% Hydrogen Peroxide, and 1 to 2 teaspoons of liquid soap(dish detergent works too).

Then add 1/4 cup of baking soda. DO NOT PUT IN A CLOSED CONTAINER.

I am thinking it will work for the area sprayed too if you soak down the area, let stand, and then spray off.

Good luck with the smell,
~~Matt~~

ewwwww. It's been a long time since I've had to deal with a skunk, but its all coming back to me now. There are things you can mix up to help with the smell, I just can't recall what. It's all online, though. Good luck bathing the ginea hen. I love them, they are so helpful. I'm glad you let them back in with the chickens.

I have had so many run ins with skunks that I don't envy you. Have you ever seen Nature's Miracle. I buy it by the gallon at our feed store. I have had to spray the outside of my house with it, my dog, my cats, and it works amazing. I got skunk on my hands and water makes it worse but putting that stuff just takes it away.
There is nothing worse than that smell. I smelled it so much the last time I had to go run errands and I could smell that some perfume companies must use scent from skunks as a base because I could smell it on some women wearing perfume.
At least it didn't get your chickens.

Ohhhh that's nasty! You poor thing. I think that's worse than a mink. We never used to have skunks around here, but they have been slowly migrating towards this neck of the woods. Yuck!

Great story, this is one of the reasons we got guineas - great watch dogs (birds).

All before 7 AM! How is the Guinea doing? did poor Jerry return? I am taking note of the recipe offered and also the product Nature's Miracle suggested by Farm Girl. It's best to be prepared, you just never know! Keep us posted on the clean up, good luck.

So much for peaceful mornings. Nothing worse than a skunk. Poor Jerry. I couldn't help but laugh at the vision of the skunked up guinea running at him. We have a barn cat named Jerry too :)Hope he comes home soon!
Amy

wow, what a post! i thought skunks ate beetles and bugs...or eggs? so they kill chickens? interesting about that naturals miracle. thanks so much for sharing this! so sorry about the kitty and the guinea. hope they settle down soon.

wow, what a post! i thought skunks ate beetles and bugs...or eggs? so they kill chickens? interesting about that naturals miracle. thanks so much for sharing this! so sorry about the kitty and the guinea. hope they settle down soon.

Oh you poor people!! We used to have many skunks around our old neighborhood. Dave even named one after Andrew's ex girlfriend. (I told him that wasn't allowed- but it stayed.) Our old dog Sam went nose to nose with a skunk, so did Katie dog, but they just sniffed each other then backed away and left. Thank Goodness. I know tomato juice works, but our vet used to sell something called skunk off. Hope the other skunks stay away!!

Oh goodness, what a horrible way to start the day!
I'm one of those weirdos that likes the smell of skunk, so you could have hung around me all day.

Did your poor kitty come back?

Holy smokes!!!! What a morning!! I wonder why that skunk was so brazen? Aren't they usually kind of on the timid side? Well, sneaky. How wonderful your 'watchbirds' were on the job. Hmmmm, may just have to get some at our next place.

Good grief, that is NO way to start your day. And that peroxide/baking soda formula works like a charm. I use it all the time on my dogs. Poor you! Poor everybody!

What an adventure. Not the kind anyone ever wants to happen however! Thankfully you didn't lose any birds to it.

I said you could catch a wiff of the skunk, lol.. :) that is why i gave you my candle to make it a melon skunky smell....