My white leghorn rooster is named Leggy.  I didn't want to name my roosters, as I knew I would not be able to keep them all and I didn't want to get attached to them  So I did not pick out cute boy names for them - instead, names just developed. Like "Leggy" for the leghorn chicken.  And now he's stuck with that name - it fits him, and he knows his name.

We were given Leggy as a freebie when we bought 5 guinea keets from an Amish woman.  He was living in a box with the Guineas.  They must have known he was a male and wanted to get rid of him.  We had just gotten a bunch of chicks the day before, and we wanted to raise the guineas and the chicks together.  We had no idea on day 1 the little leghorn was a male, but he quickly developed into a little cockerel.  When we got the little leghorn, my husband told me that he didn't like leghorns - he had a bad experience with a mean leghorn rooster attacking people when he was younger.  That made raising the leghorn a challenge to me - I wanted to ensure he would not grow up to be mean. 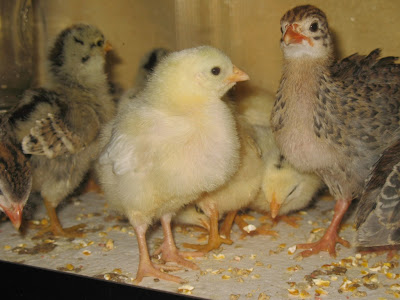 Day 1 - Leggy in the center, a guinea keep on the right 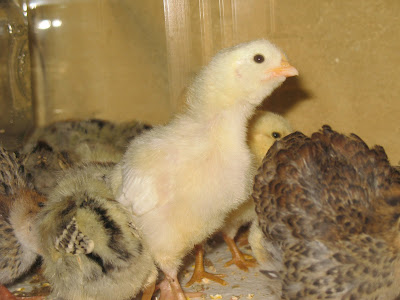 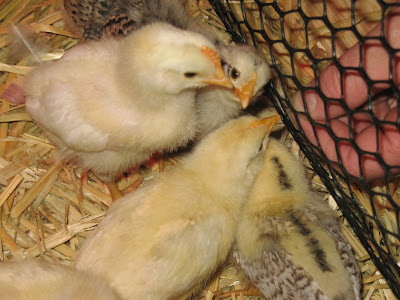 Day 20 we knew he was a rooster.  His comb developed before any others.  He is on the left in the above picture. 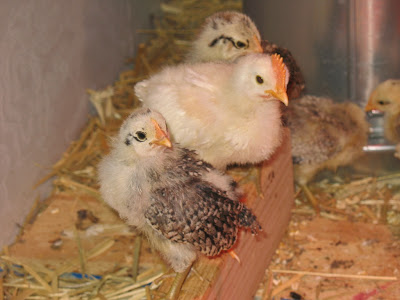 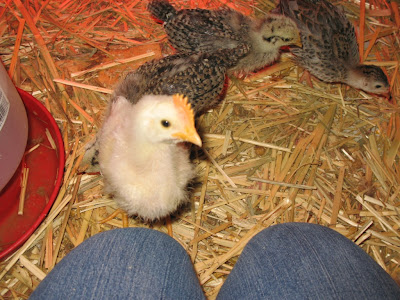 He was always very curious and friendly. 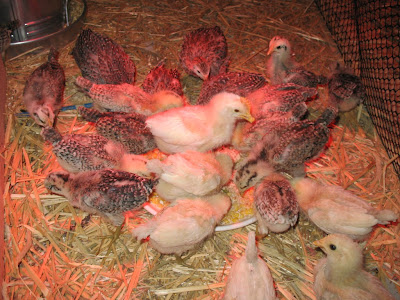 Leggy liked to be the center of attention. 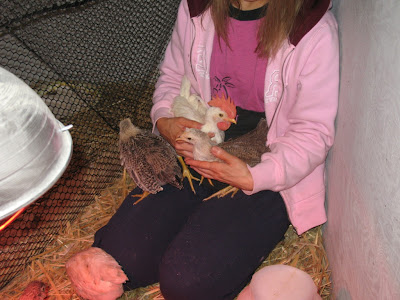 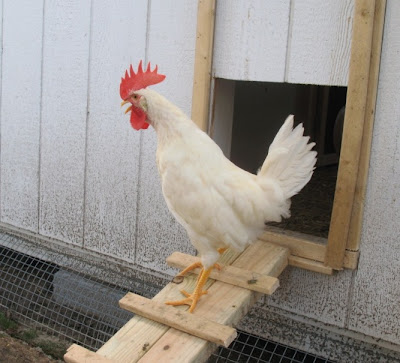 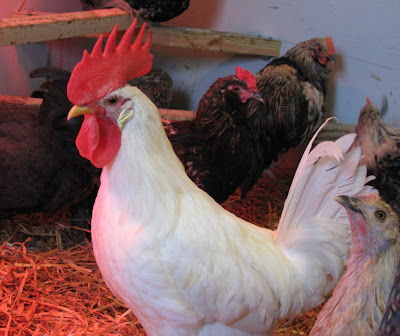 Leg the white leghorn cockerel in Feb 2010.  He has the biggest comb and wattles that I've ever seen.  He still has not developed all his tail feathers.
Leg is the flock defender - if a chicken or guinea screams, Leg is right there, making his warning "horn" noise to alert the flock of possible danger.  Once a deer came up to the chicken enclosure to check out the birds.  Leg and another of our roosters were right out in front, honking away, attracting the attention of the deer, willing to fight for the flock, while all the other chickens hid under a bush.
And Leggy is very friendly and loves to sit in my lap and cuddle.  I cannot imagine that he would ever be mean to me.  He's still my little Leggy.
at 9:44 AM

Leggy sure does have a beautiful comb. Very red! Sounds like he knew right from the start what his job is to be. Hopefully Leggy will show your husband just because he is a Leghorn and he had a bad experience, that not all Leghorns are jerks.

Just found your lovely blog and still going through the back posts.
I have to say, that is one big comb and wattle! Hope he stays sweet with his humans.

How adorable! A cuddly rooster! :)

Hi is definitely quite handsome. You obviously did a good job of raising him tame and friendly!

Cute. I liked Leggy's story. He is a pretty boy. It sounds like he is a really good rooster and does his job well protecting his flock.

Leggy is very dashing. I especially love the picture of him standing on the ramp. I don't know if it's possible to download photos from your blog since I haven't tried, but I'd love to borrow this one and try to paint it if you don't mind. I'm purely a beginner and it probably won't even look like a chicken when I'm through but I'd love to try.

Cindy - I think I proved my point to my husband that not all Leghorns are evil. He has even gotten attached to Leggy, too.

Toni aka irishlas - It's nice to find another blogger in MD!

Jennah - Yep, he's adorable to me!

Leigh - Thank you. Hope your chicks are doing well!

Robin - Do you ever think of getting a rooster for your flock?

Genny - Sure, you can paint Leggy! I can send you other pics of him, too. I have one of him on the ramp with his mouth closed; I like it better than the pic of him crowing. Just let me know!

Great shots! Day 27 made me laugh out loud because Leggy's wee rooster comb was so visible compared to the others.

I hope Leggy's gentle nature continues into his "manhood". My boy, Roopert, was a gentle giant until his full rooster testosterone kicked in. Today he is the supreme protector of his girls and will attempt to fight any and all human males that come close (my husband and youngest son included). He is also our "watch rooster" who crows when a car drives into our drive.

Over the winter, he was gentle as a lamb to me, ate out of my hand, etc., but I can tell spring is approaching, because he's beginning to get a little twitchy around me, too.

I guess I just want to say, sweet or not, never turn your back on a large rooster. The number one goal in his pea-sized brain is to protect his flock and there's no telling when a roo might perceive a threat from you (real or not).

Oh my, you have gorgeous chickens, and Leggy is one handsome devil!

I'm jealous of your sweet rooster! Mine is a mean lil sucker, but he's protective, so I guess that's a good thing!!! My husband's grandma says that if a rooster is raised by a hen, it won't be near as mean. Maybe Leggy thinks you're his mother hen!??!